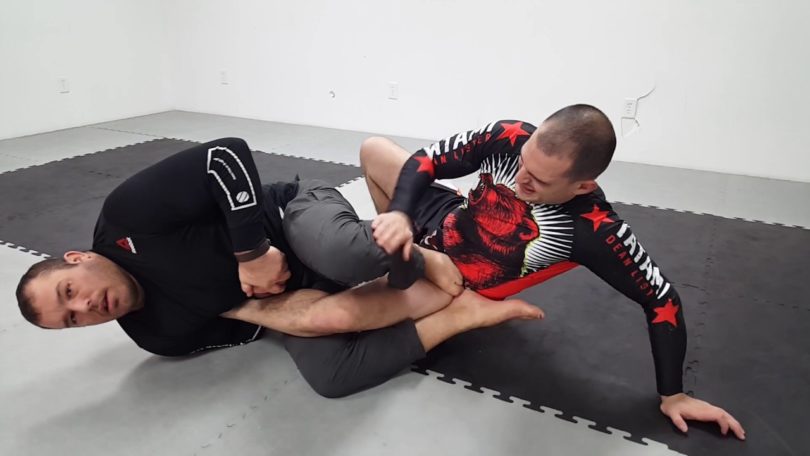 Straight ankle lock is one of the most basic leg attacks that you can learn as a practitioner even as a white belt. This type of foot lock has different variations that can be used in IBJJF tournaments. However, you also have to understand that jiu jitsu tournament ruleset has been designed to protect participants from serious injuries. It means that you just can’t apply the straight ankle lock with utter disregard of your foot placement or by how you turn your opponent’s knee.

Straight ankle lock has been utilized in different grappling disciplines from catch wrestling to judo. It has been referred to as straight foot lock, Achilles lock in catch wrestling, ashi hishingi in judo, or even botinha in Portuguese.

There are different details on how to finish and apply pressure on a straight foot lock. The basic execution of the straight foot lock is done by having the foot of your opponent wrapped around your arm like a guillotine choke. The opponent’s instep is going to be trapped on your armpit or sometimes already protruding on your back especially if you are going to finish via an Achilles lock.

Achilles lock was the term that may have originated from catch wrestling to describe the use of straight ankle lock. It means that it puts pressure on the opponent’s Achilles tendon. However, there have been different variations to this move. Botinha which came from Rodrigo Cavaca’s school created a slightly different version of the attack by attacking the instep and hyperextending the leg like a toe hold.

Origins of the Straight Ankle Lock

Over the years, leg attacks have been underrated in Brazilian Jiu Jitsu. The main reason is that it sometimes breaks the rule that you should first advance your position before going for submissions. There are a lot of chances when you can abandon passing positions and opt for a foot lock.

However, Helio Gracie mentioned his preference to attack the foot using a straight ankle lock in a news report that was published in 1932. But the more prominent Gracie family member who used foot locks is Rolls Gracie. He is also known for using toe hold against opponents.

For the non-Gracie lineage, you have Oswaldo Fadda who is also known for using foot locks in the 1950s.

Modern Use of Foot Locks

The popularity of leg attacks increased over the years thanks to submissions only formats and ADCC. It has opened its doors to a more aggressive type of grappling competition.

It is important to make sure that you know the rules in case you are going for a straight foot lock. If you are joining a BJJ tournament, it’s common to have the rule against knee reaping. It means that you can’t roll towards the side where you internally rotate the knee. You also have to make sure that your leg won’t go over the centerline of your opponent.

As a rule of thumb, whenever you are doing foot locks, be sure that you are opening up your opponent’s hip instead. And when placing your foot, be sure that it is on the hip.

The basic execution of the straight ankle lock is that you overhook the leg. The other non-looping arm is going to grab your wrist. Next, it is important to stay tight the entire time by keeping the elbows close. Next, you also have to make sure that you get to pinch the opponent’s knee with your knees. The outside leg could step on the hip and the other foot can hook on the thigh.

Finishing the move can be different from one practitioner to the next. If you are doing more of an Achilles lock, you want to make sure that you squeeze the Achilles. Next, you also want to turn towards the side. This gives you enough space to use your entire body including your legs and knees as leverage to make the lock powerful.

This becomes a fast submission if you squeeze the Achilles. However, it is also possible to hyperextend the foot. In some instances, some stretch the opponent’s foot similar to a toe hold.

From Dela Riva, he gets his hips right below the opponent’s hip. This gives him space to loop the arm around the opponent’s foot. He either uses his lapel or uses his hand to grip tightly. And to finish the move, he hacks down to straighten the leg and finish the foot lock.

There are different ways on how the straight ankle lock can be addressed. Some push their foot in to avoid the arm hurting the Achilles. On the other hand, some constantly grip fight to ensure that the opponent isn’t going to clasp with both hands.

And late during a foot lock, when the opponent is already cranking the foot lock, it’s possible to alleviate the pressure by opening up the knees to make sure that there is no leverage from the lower limbs to finish the foot look.

All of these things make the straight foot lock difficult to finish. It is also common for some to compromise position whenever they are attempting this submission. Some get their back taken in the process while others sacrifice a passing position and risk getting swept just to go for a foot lock.

Having a foot lock game early on can be an advantage. Again, why ignore 50% of the body? Straight ankle locks are allowed under IBJJF rules even for white belts. However, you also want to be point conscious in case you want to be effective with your attacks.