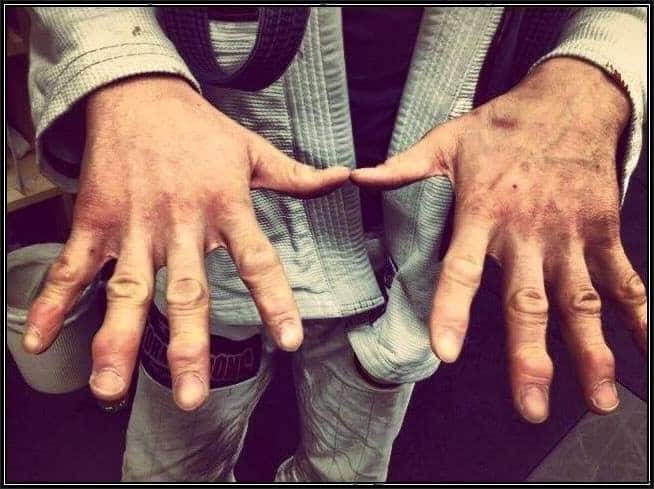 Do the warm up and stretch properly!

Everyone says that it’s super important for a reason. George St. Pierre keeps telling his friends and students that the body is like an ‘elasteec’, it has to be warm in order to stretch, if it’s cold it will break. It’s a good analogy and this is something simple that people should keep in mind. Don’t roll until you have at least a light sweat going and you have gone over some functional movements to give your body a stretch. Shrimping, rolling, scooting and whatever other movements are essential to avoiding injury during the training. Also after class, it’s highly recommended that you stretch while your body is at it’s warmest to really help those tight and sore muscles. You will also improve your range of motion that will aid in your use of technique.

Did you just start training? Are you over 35 and some jacked 20 year-old blue belt spaz wants to roll with you? Maybe it’s better to take a rain check if you know the guy has a rep for hurting people or being too rough. The examples I used don’t cover all the kinds of opponent’s you should avoid. There are usually many factors involved, but if you know the guy cranks his subs, spazzes out and accidentally hits people, or if he is much larger than you, then it’s best to preserve yourself and pick someone else. It doesn’t mean you’re a wussy, it means you’re actually smart.

Just as it’s important to avoid guys that spaz, you also don’t want to be a spaz yourself. The less calculated you are, the higher your chances of tweaking a body part or collision. Headbutts, elbows and knees are some common collision problems in BJJ and the results can be quite gruesome. So play smart and use your technique – if you poorly compensate with strength or speed too often, you may face the consequences.

Leave your ego at the door.

To put it bluntly, tap when you know you’re caught. Who cares if you get tapped. Whether you tap or your arm gets broken, the result is the same, you lost. Except if you tap, you can come back and train the next day and fix your mistake – a much better deal, no? Sure, you can struggle as much as you want and try to get out, but if it’s tight, just tap – especially if you’re in class. You’re there to learn and losing is part of it – surgery and recovery time is not. If you’re in the finals of the Worlds and you’re up on points – it may be a different story (ie. Jacare vs Roger Gracie). But if not, it’s probably not worth it.

Tape is your real best friend.

Making the effort to buy tape and take some time before every class to support any injuries can make a world of difference. Proper taping can help strained wrists, ankles and fingers, which are the most common mini injures in the sport. What’s best about it is that it will help avoid further injury and help heal whatever problem you have quicker. Keep a roll in your bag at all times, it’s impossible to do jiu-jitsu and never need tape.