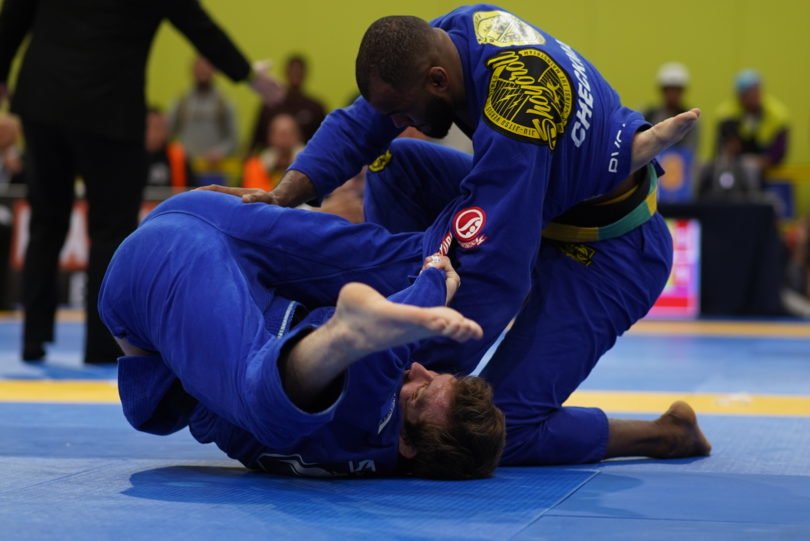 The squid guard is another lapel guard variation that has been developed by Keenan Cornelius. Though its origins can be traced to Terere during his years teaching at the TT academy, Keenan Cornelius created a guard game based on lapels. He started with his worm guard in 2014 that was first seen in actual competition against Murilo Santana during the IBJJF Pan American Championship.

The squid guard system isn’t exactly something new in competition. Cobrinha as early as 2008 was able to hit a lapeloplata to Orbit sweep. However, it is Keenan Cornelius who made different varieties of attacks from this position plus combining it with the worm guard.

First, let’s discuss how you are going to get to a squid guard when your opponent steps over the lapel to free the leg. The opponent also usually steps the leg back after getting rid of the lapel. In this situation, you are going to be too late if you are going to switch the leg and insist on doing a worm guard on the other side. What you can do instead is to go for a waiter grip on the other leg (the leg that is on the same side as the lapel) and feed the lapel from there. However, what makes the squid guard-heavy for the opponent on top is the fact that you don’t have the leg on the outside of his knee. Instead, you are using your instep and doing as if a nearside X-guard or a key guard. Also, the hand that is holding the lapel will have the thumb pointing out.

Another common setup is coming from lapel lasso. From a lapel lasso, you have the option either to go for a worm guard or a squid guard depending on the leg that is present. If the leg that is present is on the same side as the lapel, then that’s when you can go for a squid guard. You can go for a waiter grip and then feed the lapel to the hand and finish the same way as the first one.

And lastly, what makes the squid guard a great option for guard players is that you can also set it up from a near side X-guard or a key guard position. All you need to do is to have a waiter grip and feed the lapel to have the leg wrapped while your leg also pulls on your opponent’s posture.

Sweeps from the Squid Guard

The squid guard is an aggressive guard that can end up transitioning towards sweeps or even submissions.

However, a common scenario during lapeloplata sweep is when an opponent steps over with his foot either by accident or intentionally to base out from the lapelolata sweep. That’s when you pull off the levitation sweep. You get to post on your elbow and have your leg floating on the lapel thus the term levitation sweep. Next, triangle your legs and get the instep of the free leg to block the far leg of the opponent either by the back of the knee or by the Achilles.

One of the best ways to fight the squid guard is by going for a combat base. This will help relieve the weight off your back allowing and even give you a chance to do some pressure passes. Once the opponent kneels for a combat base with one knee up, the simplest sweep is to do a backroll. Throughout the sweep, it is important to not let go of the lapel to ensure that the opponent won’t have a base.

And lastly, if you are dealing with a guy with a good base and isn’t moving forward when you do the lapeloplata, it is possible to hit the orbit sweep. With the squid guard set up, you want to go for a backroll but to have your free leg either in a 50/50 or you can also just have the instep right behind the opponent’s knee. This will allow you to stand up and not get stuck in a 50/50 fight where you will most likely give up the two points.

Submissions from The Squid Guard

Keenan Cornelius recently released highlights of his worm wrestling. This is something that can be applied to finish sweeps from both worm guard and squid guard. Instead of getting your leg stuck inside the opponent’s lapel, you have the option to loosen the grip and just get the leg out allowing you to stand up and start worm wrestling against an opponent.

The squid guard is a complicated and aggressive guard that has changed guard play in recent years. It’s a tiring guard to pass for the person on top considering how your posture is always controlled by guard player.