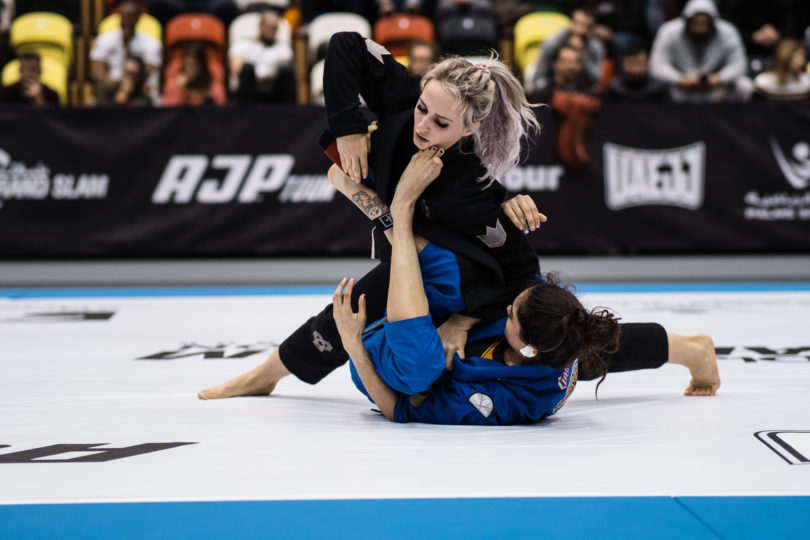 Smash pass has gained popularity in recent years because of the development of complicated guards. Complicated guards made it difficult to just go for a regular toraendo pass from the get-go.

So what exactly is the smash pass? The smash pass can pertain to different things. It is commonly used to pertain to the leg weave pass. Other times, it pertains to any pressure pass that makes the guard player grunt and concedes the pass because of pressure. Nowadays, smash pass is a generic term for any pass that pertains to a passing system that requires the use of pressure rather than speed and timing.

Why use a Smash Pass in Jiu-Jitsu?

Smash passing is implemented not only by big guys in jiujitsu. Nowadays, we’ve seen smaller guys such as the Miyaos use their version of smash passes to ensure that they get the three points. One of the perks of having a good smash passing sequence is the fact that you can conserve energy.

When dealing with complicated guards, the open guard can be used as a rope-a-dope tactic that can get the passer to get tired and increase the chances of giving up the sweep. If playing in a competition setting, even if the guard player hasn’t completed a sweep, he or she may get the ref’s decision win because of activity. That’s when smash passes work well. This comes in handy especially in nullifying the activity of the guard.

Terrere is the purveyor of what is known as “modern jiujitsu”.  And a large part of what made modern jiujitsu is his signature TT pass or also known as the leg weave or the hip smash pass.

The good thing about this passing sequence is that it is dynamic. It can be combined with different passing sequences seamlessly preventing you from just banking on one type of guard pass against a complicated guard.

How exactly does it work? It usually starts by getting one of the opponent’s leg in between your legs. Next, you need to ensure that you have a low base. This position is often referred to as the headquarters position.

From here, the passer is going to move laterally and the arm controlling the trapped leg is going to shove and fold the legs together. This pass is a good way to get your hip on top of the opponent’s legs making it harder for the opponent to play an open guard.

For the top control, you will be grabbing by the collar. You want to grab high right at the clavicle to make sure that you have enough leverage to control the movement of the person playing guard. This lessens the chances of the guard player to post his or her elbow on the mat and create space.

And once you’ve folded the legs, it is a good idea to control by the hip using the hand that shoved the leg. This makes it hard for the person to scoot out. And for your head, you want to have it beside the opponent’s face. In this position, you become a blanket against your opponent.

The typical leg weave passing sequence is a favorite by practitioners all over the world because it can be connected to different passes without spending so much energy from the headquarters position.

Once the opponent tries to recover as you fold the legs, it becomes possible either to end up in a half guard or you can end up transitioning towards a knee cut pass.

The hip smash pass is a great way to nullify the Dela Riva and the Reverse Dela Riva position. The goal is to start with your opponent’s hip on neutral. If you are going up against an opponent playing Dela Riva, it is important that you first get rid of the hook and the collar grip, or else it is going to be risky going sideways because your opponent can always decide to knock your base off.

Another reason why the hip smash pass is an important pass to learn is because of Dela Riva players who tend to grab by the pant rather than grabbing just the ankle. In doing so, it makes the knee slice pass difficult because there is tension on your leg. Instead, you can opt to stick to a smash pass and work your way out of the guard in a tight manner.

Road to Back and Mount

The smash pass is a good way to find a better position not only in bypassing the legs but also in finding the back or the mount. If done properly, you can get 3 points for the pass and an additional 4 points for either the backtake or the mount.

From the hip smash pass, you can go and work for the mount by sliding one knee up on the opponent’s armpit and while the other leg wedges the opponent’s hip to free the leg to complete the mount.

To collect four points the other way around, you can also opt to windshield wiper your legs to take the back.

Smash passing has become a staple pass over the years. It is an answer to the Dela Riva-centric attacks. As berimbolos became a part of a guard player’s game, Dela Riva guard sequences became common as well. During these instances, reverting to a smash pass can do wonders for your passing game. It can be a good way to not only to rest but to also initiate different types of passing sequences.

Smash passing is one of the most satisfying styles of getting past the guard. And one of the most common guards vulnerable to the smash is the half guard. Enter Gustavo Gasperin.

World’s silver medalist Gustavo used his smashing style to get him to the podium of one of the most prestigious BJJ tournaments.

This detailed instructional features over 40 ways to smash the half guard and various styles of it.

Check it out at Digitsu.com and use our code ATBK10 to get 10% off.