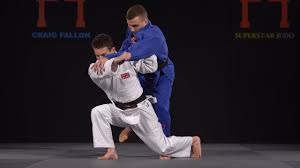 Some throws look similar to other existing throws. Seoi Otoshi has similar mechanics as a Seoi Nage and a Tai Otoshi. However, the legs are set up in a particular manner wherein one is up and one is down on the mat.

Considered as a Te-Waza or a hand technique, it is part of the fifth group of the 1895 Gokyo No Waza List.

How to Perform a Seoi Otoshi

Seoi Otoshi is a modified shoulder throw. Unlike Seoi Nage, you have a similar grip as that of a Morote Seoi Nage. And also, the leg placement is an important characteristic that sets Seoi Otoshi different.

To perform the Seoi Otoshi, you start by grabbing the same side collar and the tricep area of the opponent. Just like your Seoi Nage, the goal is to put the uke on top of your shoulder to topple the opponent. To do this, a lot of people miss on the proper timing of the throw. Just like your Seoi Nage, it is important to get the uke to move forward.

Getting the uke to move forward is tricky. You can either wait for the uke to attack or pull the uke to make him or her step forward. This will help give you the chance to execute the entry and off-balancing better.

Next, the tori need to lift using the forearm that was holding the collar. This will help support the hand that is gripping the tricep. However, unlike a Seoi Nage or a Morote Seoi Nage that is finished by the Tori standing, Seoi Otoshi is done slightly different.

One of the biggest concerns when it comes to doing Seoi Nage is lifting an uke especially if he or she is heavier. At times, even a resisting opponent will give you a hard time to complete the move. With a Seoi Otoshi, the tori will get to kneel on the same foot that did the cross step.

This will get the uke’s weight to move forward and be carried on the Tori’s shoulder. Apart from kneeling, the other leg is also important as it is the one that is going to be extended and blocking the opponent.

How to Improve Your Seoi Otoshi

There are different ways on how you can improve your Seoi Otoshi. The first thing that you want to do is to master the throws that have contributed to the development of Seoi Otoshi. It means that you want to first learn how to properly execute a Seoi Nage, a Morote Seoi Nage, and a Tai Otoshi. These three throws can help give you the foundation when it comes to doing the Seoi Otoshi in an actual randori or even in a competition.

Also, you must take advantage of doing uchikomi training that can help give you faster transitions whenever you are doing entry and off-balancing. This will help develop awareness on how you can cut do the move properly. However, kneeling one knee down and extending the other should also be practiced. This way, you can build muscle memory whenever you are executing the throw.

Reasons to Stick to Seoi Otoshi

There are perks why you should learn to hit the Seoi Otoshi on actual randori and tournaments. For instance, it’s an answer to the natural defense of an ukes when dealt with a shoulder throw. One of the things that judokas do is to do a cartwheel or find their base to re-center against a tori attempting a Seoi Nage. A Seoi Otoshi prevents this from happening as you have the extended leg that trips the uke from adjusting.

Also, finishing the Seoi Nage standing is a difficult move since you will need to lift using your legs and your hips to knock the uke’s center of gravity. With the Seoi Otoshi, it can be simplified. The tori kneels letting gravity do the work.

Seoi Otoshi is a good move that can also be combined with other throws. You can easily combine this with foot techniques to mask your cross-step entry before turning your back to your opponent.

Common Problems That You Encounter Doing the Seoi Otoshi

Before you even decide to hit the Seoi Otoshi, you have to always be on the side of caution. One, you have to understand that there is always the risk of getting your extended leg injured. Just imagine having an uke to drop on your leg. Though there are precautionary tips such as properly positioning the extended leg when doing this move, you want to focus on getting the uke’s weight on the other side. You can do this by focusing on both grips to get the uke on your shoulder. This will minimize the weight on the extended leg. This makes it possible for the tori to hit the throw while minimizing the risk.

Next, this move is rarely seen outside a Judo format. The reason is that the tori tends to expose his or her back too much. This will put him or her in danger especially in a BJJ tournament.

You also have to accept the reality that shoulder throws don’t work against small individuals. If you are up against someone smaller, it will be difficult to hit the move because you have to go lower than the uke’s hip.