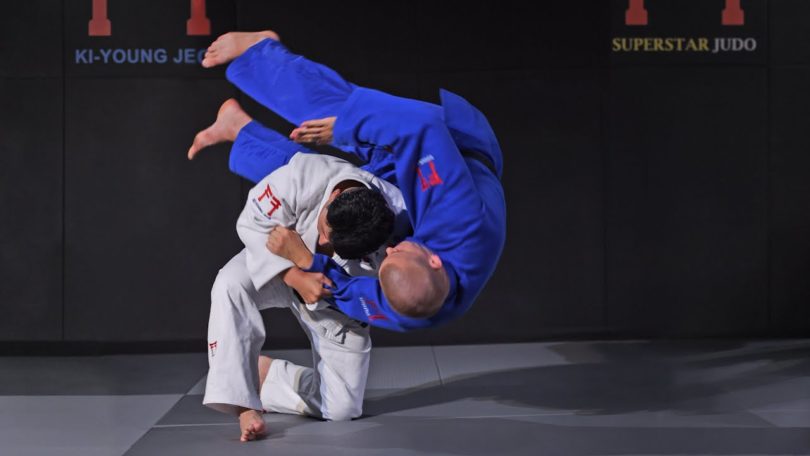 Seoi Nage is classified as a shoulder throw and is one of the forty throws developed by judo’s founder himself, Jigoro Kano. It also belonged to the current 67 throws of the Kodokan Judo.

The technique is used mostly as a reaction to someone who pushes forward. One of the things that make Seoi Nage popular is the fact that it is a powerful throw. It gets the uke over the tori’s shoulder and could result in an ippon.

It is also something that is applied in wrestling. However, this move is quite tricky especially if you will have to do it in a self-defense scenario or if you plan on doing it under BJJ rules.

How to Perform the Seoi Nage?

One of the biggest mistakes when doing Seoi Nage is to not squat low enough to get the opponent on top of your shoulder. By also lowering your base, it is also possible to scoop the opponent’s weight off the mat. On top of that, if you stepped close enough your hip can also take out the opponent’s base making it easier to finish the throw.

As for the control in the upper body, it is crucial to lift the tricep side. The other hand initially holding the collar grip will then clip using the bicep helping in lifting the uke. This will help get the uke’s weight off the ground.

There are different ways of how you can finish the Seoi Nage. First, you have the option to kneel down on both knees. By gravity, you can tip the uke over as you drop on the mat. The next option is a standing Seoi Nage. This type of shoulder throw is a bit difficult to pull off for several reasons. For one, you need to have good timing and two you will need to have a strong base. For those who tend to finish their Seoi Nage standing up, they usually lunge forward to make it easier to lean and tip the uke over their shoulder.

Risks of Doing the Seoi Nage

There are some dangers that you will have to be aware of in case you are going to try doing the Seoi Nage. If you are the type who is going to do a kneeling Seoi Nage, this is something that you can only do on the mats. On concrete during a self-defense scenario,  kneeling Seoi Nage can potentially cause injury on your knees. In addition to this, if you are going to have a weak entry, the uke can catch your back or even counter with a Sumi Gaeshi.

In Brazilian Jiu Jitsu tournaments, it is also possible that the uke can catch your back and establish his or her hooks. It can leave you in a situation wherein you give up four points or you even end up defending from a bad position.

Increasing the chances of hitting a Seoi Nage

There are a lot of things that you can do to increase your chances of completing a Seoi Nage. If you are going to hit a Seoi Nage, be sure that the opponent is pushing forward. It makes it easier to throw an opponent that is heading towards you than someone who keeps on moving back. Next, you also want to combine the attacks with other throws. A common answer is to have several foot attacks before the actual shoulder throw. This will help set up your cross-step which serves as the initial move for the kuzushi of your Seoi Nage.

One of the things that make the Seoi Nage a popular move among judokas is the fact that you can do Uchikomi training with this type of throw. This is something that you can’t do when you perform moves such as a Tomoe Nage.

Another option is to practice lifting an uke over the shoulder whenever you are doing training. This will help develop your sense of balance and your ability to carry an uke’s actual weight even during standing Seoi Nage.

Also, timing is crucial whenever you are trying to hit a Seoi Nage against a resisting opponent. It is important that they are either pushing forward or you are making them step towards you. If an uke isn’t moving forward, a good option is to drag the collar and tricep and pull your opponent by stepping back. This will pull the opponent forward and therefore allowing you to hit the Seoi Nage.

In addition to this, there are variations to this kind of shoulder throw that can easily be used in succession or as an alternative in depending on the situation. A variant of this throw is the Morote Seoi Nage. Though it uses the same concept, there is a slight difference how the tori is going to grab on the collar and the tricep. Instead of clipping the tricep using your bicep, you will simply trap the armpit of the uke using your forearm.

Seoi Nage in Sports Outside Judo

Seoi Nage is a throw that can be used in different sports aside from judo. Wrestlers are also known for doing shoulder throws. The only problem with shoulder throws when it comes to wrestling and MMA is the fact that you don’t have any fabric that you can hold on to.  And instead of just clipping the tricep using your bicep, you will most likely grab the bicep with your hand. As for the conventional tricep grip during the start, wrestlers control the wrist instead.

In Brazilian Jiu Jitsu, it is possible to do a variant of the Seoi Nage. For instance, Brazilian Jiu Jitsu athletes are allowed to have a collar grip and a tricep grip on one side. Rodolfo Vieira is known for doing this throw during his active years competing focusing on dropping the opponent on one shoulder.