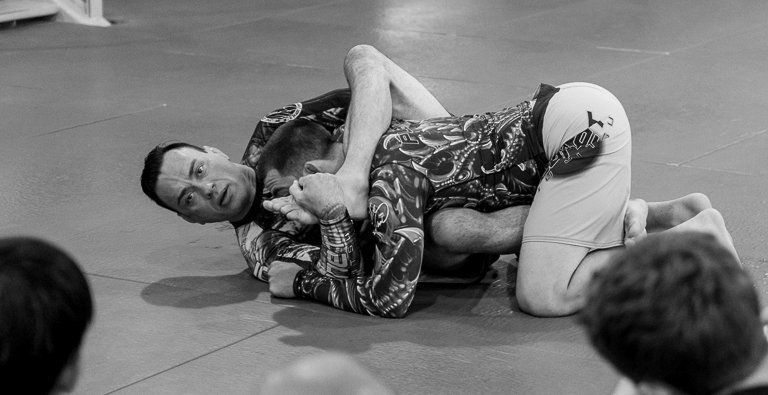 Eddie Bravo popularized a high guard otherwise known as the rubber guard. It has been widely used not only in jiujitsu but also by MMA practitioners. The likes of BJ Penn and Shinya Aoki are known to use the rubber guard to control the opponent’s posture and prevent strong punches to reign down from the top. And this isn’t just a defensive guard. We’ve seen Shinya Aoki finish with a gogoplata from this position and BJ Penn pull of some good attacks from here.

Over the years, there’s a divide regarding people’s opinions about the rubber guard and the entire 10th Planet system created by Eddie Bravo.

The Origins of the Rubber Guard

How to Set up a Rubber Guard

Setting up the rubber guard is different from your regular closed guard. When doing a regular closed guard, you will usually lock your legs behind the lower back of your opponent. Instead, for the rubber guard, you will do a movement that is quite similar to a piriformis stretch. The point is to get the legs on your opponent’s upper back. In some instances, you can also put the legs on top of your opponent’s neck. You can then do a cross grip on your shin. To tighten up the position, you can get your elbow touching the opponent’s collar bone.

You can do this by swimming your free arm (the one that isn’t holding the shin) to your opponent’s same side arm. Next, you can proceed to take control of the arm by doing a whizzer hook. This move is called by Eddie Bravo as the Zombie. The point of the “Zombie” is to get your opponent’s one arm into the mats.

Once you have your opponent’s arm on a whizzer or the “Zombie”, you want to switch the arm that is controlling the shin to the other side of the ear. This position is known as the “invisible collar”. It mimics as if you are holding a cross collar grip on your opponent.

Once you’ve reached Zombie and Invisible collar, you now have different submissions ready for your opponent. In case your opponent moves away, you can easily catch someone with an omoplata or even get the shin in front for a gogoplata.

For the other arm, you can also attack it if it gets involved trying to press forward or if has been used to attempt to posture up from the position.

Eddie Bravo showed a tight armbar from the rubber guard series with the opponent’s arm trapped under the invisible collar.

Limitations of the Rubber Guard

There are not a lot of people who can do the rubber guard, especially in higher weight classes. Heavier weight divisions are not known for their flexibility. In addition to this, if you are in MMA, we’ve seen George St. Pierre deal with the rubber guard especially when it was already too slippery in the middle rounds of the fight. Though you may argue that GSP may have used some Vaseline in between rounds to his advantage, it clearly shows how it is hard to control the rubber guard in MMA especially when you have sweat involved.

If you are having a difficult time with your flexibility, you can use the William’s guard as an alternative to the rubber guard. Made by Shawn Williams, it uses angles rather than breaking the posture and staying center. It promotes the same type of invisible collar control. However, the only difference is that the legs are pinching somewhere in the upper back and the hips are scooted out.

Should you use the Rubber Guard?

Should you be doing the rubber guard? If you are flexible and you are dealing with someone who is within your weight class, the rubber guard is beneficial when it comes to controlling the posture. It helps isolate one side and formulate different attacks from there.

Unfortunately, it isn’t exactly for everyone. Not everyone has flexible hips. Bigger individuals will have a difficult time grabbing their shin. If you are not that flexible, it is always a good idea to use the same concept of isolating one side but to try William’s Guard instead.

The rubber guard in MMA is a good option especially if you find yourself on your back during the first round of the match. Here, you have to take advantage of the fact that there’s still no sweat that could slip your legs easily. In addition to this, you can use the position to tire out your opponent who could be struggling to fight the position. This is a good gameplan especially against opponents that have good ground and pound.

Nowadays, rarely do you see people stick to rubber guard when fighting in MMA. Rather, people do their best to butterfly and stand up. However, if forced to play closed guard, the rubber guard can give an opponent some curveballs to deal with especially for someone who isn’t exactly familiar with the position.