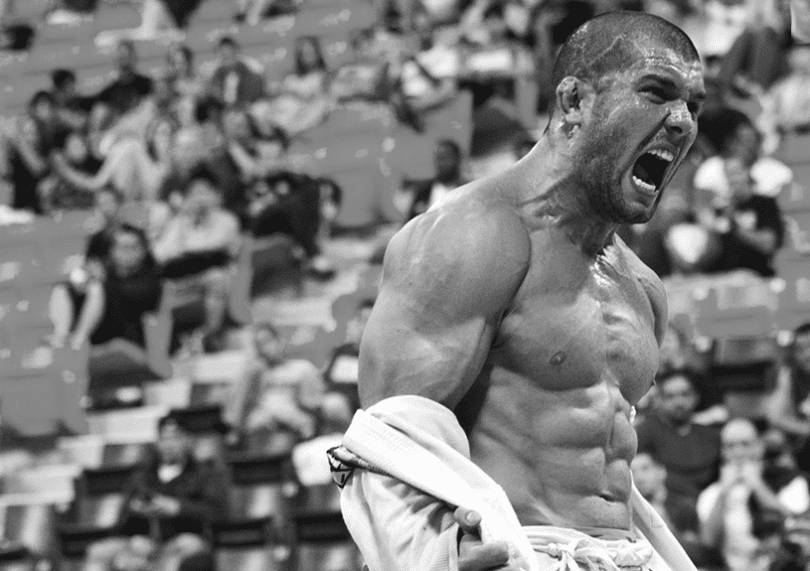 After Rodolfo Vieira’s impressive campaign in 2011 he is widely considered to be the current best Jiu Jitsu player in the gi. He is seen as being behind only Roger Gracie, against whom we have regrettably not been able to see Rodolfo compete. The key to Rodolfo’s dominance is his ability to pass some of the best guards in the world.

Although winning titles at all belt levels, Vieira didn’t come into international prominence until 2009, when he won the Abu Dhabi World Pro qualifiers in Brazil, then went on to defeat several well-known black-belts to win the World Pro while still a brown belt.

According to his interview with GracieMag, Rodolfo Vieira started Jiu Jitsu as a chubby boy in Campo Grande, a medium-sized city in the middle of Brazil. It was 2003 and Vieira wanted to lose some weight. His journey in Jiu Jitsu soon saw him traveling to Méier, in Rio, where the young Rodolfo began training under Mestre Julio Cesar Pereira of Universidade Gama Filho (UGF) – now Grapple Fight Team (GF Team).

Rodolfo won the Brazilian Nationals at both blue and purple belt, in 2007 and 2008 respectively. His journey through the belts was blindingly fast, but he didn’t give critics any time to complain, winning the absolute at the Worlds as a brown the same year he was promoted. But these accomplishments were only appetizers for his breakout year in 2009.

His performance in Adu Dhabi earned Rodolfo the nickname Caçador dos Faixas Pretas and a black belt, which was awarded to him by Julio Cesar as Rodolfo returned to Galeão International Airport in Rio de Janeiro. At black belt Rodolfo won the 2011 Pan Ams, the 2011 World Pro gi and the 2011 Worlds all at absolute and weight.

These feats have made the humble kid from Campo Grande a super star in the Jiu Jitsu world. What has attracted the majority of attention – beyond even Rodolfo’s remarkably modest demeanour and larger than life physicality – is his otherworldly guard passing skills.

But Rodolfo’s passing isn’t anything most of us have not already learned. There are no secret moves or voodoo mind control involved – just unbelievable pressure, great timing and combinations, and of course technique developed through endless hours of repetition. If there is a secret to how Rodolfo has managed to pass some of the best guards in the world, it is being able give his opponents so few options that he is able to perfectly anticipate the next move and implement his well-honed guard passing combinations.

By closely examining Rodolfo’s career we can learn to develop our own passing games. There’s no guarantee it will also make you a “black belt hunter” but it will give you a series of guidelines that you can use to emulate one of the best guard passers on the scene today.

Guard Passes You Need to Know

To get the most out of studying Rodolfo Vieira’ you should be familiar with a few key guard passing techniques. Rodolfo tends to use standing guard passes to pass open guard. Most of these passes start with one leg inside your opponents’ with a grip on the lapel and pants.

There are several variations of the bullfighter pass. The one most of us learn as white belts is to grip both pants and throw the legs away like we are attempting to trick a particularly mentally deficient bull. Above, Andre Galvao shows a high percentage variation of the toreador pass that is similar to how Rodolfo Vieira tends to initiate the guard pass. Galvao emphasizes blocking the hip and gripping the pants, allowing you to redirect your opponent’s legs while preventing them from pulling themselves underneath you. Rodolfo tends to use the pant cuff grip instead of the inside knee grip.

Demonstrated by Rodolfo himself, the step back pass is used when an opponent sits into you to set up sitting guard or attempt a single leg. Rodolfo rotates his trapped leg over his opponent’s then with a grip on the back of his opponent’s gi Rodolfo is able to back step over the legs for the pass. The key to this pass is what Shawn Williams calls “leg work” – the ability to pivot your leg leg a windshield wiper. According to Rodolfo, this movement is performed before your opponent can fully establish the position, so timing is essential.

The X pass is often associated with Saulo Ribeiro, and is a useful pass when your opponent is not gripping your leg that is inside theirs. To perform this pass, kick out your leg and push your opponent’s leg with your pant grip, redirecting your opponent’s leg away from you to allow you to settle into knee on belly or side control.

The jumping pass is a high-pressure open guard pass that acts similarly to the toreador and X-pass in that you are moving yourself around your opponent while extending their legs. Demonstrated above by Marcus Vinicius Di Lucia, this pass uses shoulder pressure instead of the lapel grip to control your opponent’s body. The pant grip still redirects your opponent’s legs allowing you to hop over your opponent’s guard into side control. Note that while Vinicius grips over his partner’s far leg Rodolfo tends to grip between his opponent’s thighs, underhooking the far leg.

This is one of my favourite guard passes and is a position that Rodolfo often uses as an intermediary between the other guard passes on this list. Two ways opponents often attempt to prevent this pass is by putting their knee on your hip to stretch you out or looping their leg over your arm to push you back and get a leg lasso on your arm. Watch Rodolfo’s match with Rubens “Cobrinha” Charles to learn how he deals with these defences.

If you are a frequent reader of the Jiu Jitsu Laboratory you’re probably getting sick of reading about the leg drag pass. But it’s important to know since many of the world’s best, including Rodolfo Vieira make it a staple of their passing game. Above is Rodolfo’s instructor, Julio Cesar Pereira, demonstrating his version of the leg drag pass. Note that Pereira’s method emphasizes moving your body around your opponent, ending with your knee in your opponent’s back. This is the position Rodolfo uses the great majority of the time when he takes the back off the guard pass.

Again demonstrated by Mestre Pereira, the reverse Kesa Gateme pass is one of Rodolfo’s main half guard passes. Switching onto his hip from half guard, Pereira demonstrates how he stretches out his opponent’s top hook to free the trapped leg.

Now that we are intimately familiar with the guard passing techniques used by Rodolfo Vieira we can begin to examine how Rodolfo uses them in his most famous matches. Make sure to keep an eye out for the next entry in the series for a step-by-step breakdown of Rodolfo’s guard passing against the world’s best guards.