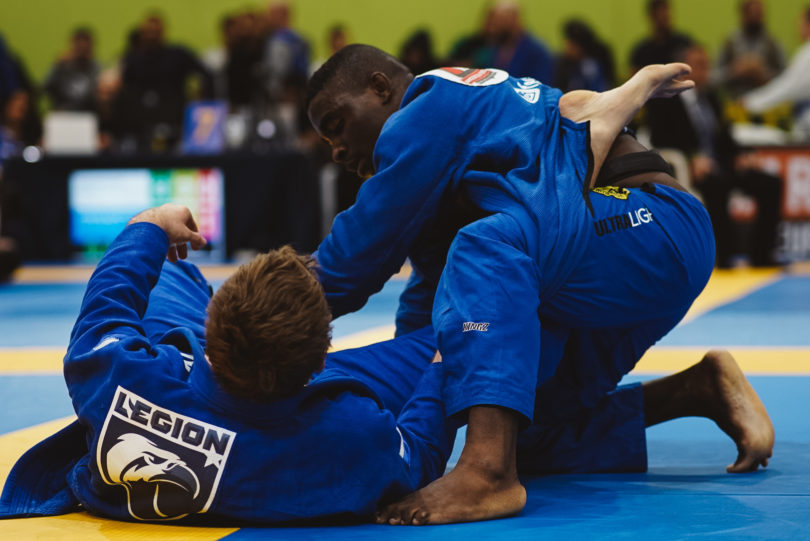 Lapel guards developed by Keenan Cornelius changed how guard players approached the game. The worm system allowed guard players to contain explosive passers and even tire them down given the ability of the worm guard system to control the posture with minimal changes in grips.

The first scenario is when the passer gets the wrapped leg in between his or her leg. Maintaining the worm guard in this scenario is futile given the ability of the passer to switch to work for a knee slice, smash pass, or even a long step pass.

Next, another situation wherein Reverse Dela Worm is frequently used in rolling or during competition is when the passer puts pressure on the wrapped leg even when you have it straight.

How Do You Set Up The Reverse Dela Worm Guard?

Reverse Dela Worm Guard occurs when the guard player grabs the lapel underneath his or her leg similar to doing a Reverse Dela Riva Guard.

However, it is also important to note that there are things that you have to be very conscious of if you intend to uppercut on the trapped leg and grip the lapel. For instance, this position is prone to long step passing or a knee cut. To prevent these situations, it is important for the guard player to always frame. It is ideal to use the free leg and the arms as frames with the hip actively facing the opponent.

The Reverse Dela Worm shouldn’t be considered a guard to hold an opponent down but rather a position where you can take action whether to sweep, get the back, or finish an opponent.

There are different attacks from Reverse Dela Worm Guard depending on the configuration. If the opponent decided to bring your wrapped leg in between his legs, it is possible to hit a regular Kiss of Dragon back take.

If your opponent decided to put weight on your extended leg, there are instances when you can still do a Kiss of Dragon but without the usual Reverse Dela Riva hook. However, a more common approach is to make a deep Dela Riva Hook instead. You do this by swinging your hip to look the other way. And also, the leg that is wrapped in lapel should go over the knee line of your opponent. This will give you access to a deep Dela Riva hook. Finishing the back take varies from one person to the next. It is possible to let go of the lapel and fight for a baby bolo or get the opponent’s hip to hit the mat and dive for a berimbolo.

The Reverse Dela Worm Guard is also a chance to sweep an opponent if you are really in need of that two points. It is possible to go for the deep Dela Riva and just hit the opponent’s hip and take the sweep. If against a resisting opponent, you can also switch to a Dela Riva X guard in this position all while not abandoning the lapel. This will open up several opportunities for a sweep or by going for a more traditional Dela Riva X guard.

Another good option if you don’t want to go for a deep Dela Riva hook is to simply face the other way and get your leg to go over the opponent’s knee. Now, you can post with your free hand’s elbow and use the free leg to cut your opponent’s base. This will look like a regular worm guard sweep.

If your opponent decides to stand upright to try and break the Reverse Dela Worm, you can do a front roll and just fold your free leg to end up on your opponent’s back.

The Reverse Dela Worm Guard can be combined with different guard configurations. For instance, you can use a lasso using the free leg. If you do a deep lasso and switch your hip to face against your opponent, it is possible to finish a sweep especially when you cut using the lapel.

A common reaction of the person on top when you play Reverse Dela Worm is to grip the free leg. It’s possible that they are trying to get rid of the frame or they are also trying to prevent the leg from going for a deep Dela Riva. This can be an opportunity to hit an armbar against an opponent. You can break the grip with the free hand and hit an armbar or even an omoplata once you trap the arm.

Worm wrestling is a good way to finish the Reverse Dela Worm sweep. Once you get your hip to turn away from your opponent and go for a deep Dela Riva, there are instances when you can remove the leg from the lapel and simply fight for a takedown.

Getting to a Safer Guard

If you want to play a more conservative game whenever you find yourself in Reverse Dela Worm, it is also possible to go back and play a better guard. For instance, when you find yourself in Reverse Dela Worm with your wrapped leg extended, you can play a closed guard by doing a shin on shin against the opponent’s leg (the one that is up). From here, you can go straight to an attack or have a more conservative approach and attack using a closed guard.

It is important to understand that given the familiarity of many competitors to the worm guard, you will find yourself in this situation if you decide to play a lapel guard. Good passers will even consider going for a Reverse Dela Worm than get stuck in a worm guard. The Reverse Dela Worm is a good option for defending against passing sequences while still having your attack options against your opponent.