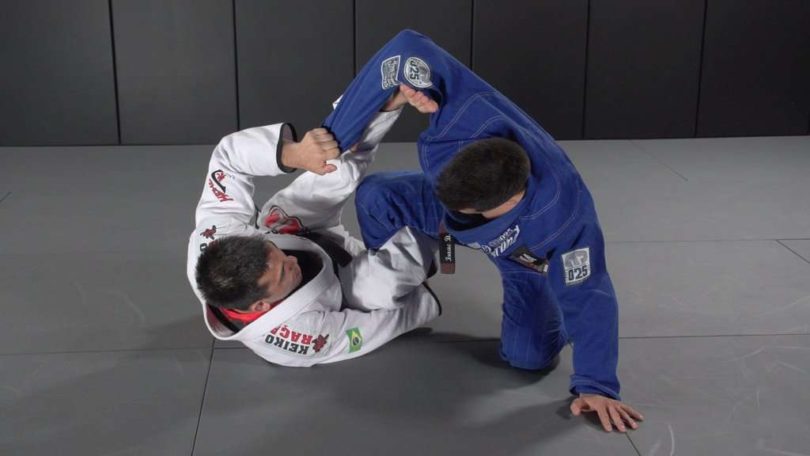 This hook starts inside the legs and snakes around to the outside of your opponents lead leg, using the instep to hook at the hip, knee or most commonly, the thigh. It contrasts with the regular DLR guard; the hook is inside the lead leg as opposed to outside. Both can be considered forms of half-guard mainly used against a standing opponent.

With the reverse DLR it is important to have the foot of the free leg pushing on the hip and the inside foot hooked deep with your knee pushing out to prevent the leg drag pass or knee slide. One of my coaches, Matt, always reminds us to keep all four limbs doing something. It’s good advice that is seldom followed. For this guard, it is important for your feet to be solidly forming their hooks, and for your hands to be grip-fighting – either grabbing the lead ankle, fighting off your opponents attempts to strip your hooks, or setting up grips for your attacks.

First, let’s get familiar with the basics transitions involved with the reverse DLR from the following video of brown-belt Matt Kirtley (Aesopian.com):

Kirtley nicely demonstrates how the stance and posture of your opponent dictates your guard choice. For example, start with the conventional DLR: if your opponent tries to prevent your outside DLR hook by squaring up to you and dropping their weight, use your free leg to hook inside the same knee, pushing on the hip with your now-defunct outside hook. From here, you can transition to X-guard by under-hooking the far leg and pushing with the inside hook to bring both legs inside your opponent’s. Replace your inside hook with the other hook at the knee and raise it to tight into the hip.

Alternatively, with both legs inside, you can shoot one foot deep, lacing around to the hip. This is the one-legged X-guard (Kirtley calls it the “leg-lock guard”), which have been highly developed by Marcelo Garcia and will be the focus of a post in the near future. Kirtley also briefly demonstrates one of the first sweeps on which we will focus.

In the following video, Rubens “Cobrinha” Charles also demonstrates this sweep, which is similar to a sweep performed from the X-guard:

Other basic sweeps from here include the reverse tomahawk and sitting up to a single leg. Sitting up from DLR deserves an entire post to itself, which I’ll put on the ever-increasing list of future topics. However, there’s one more sweep from this position that I consider fundamental, which can be done with or without a gi. Here’s Rafael Mendes demonstrating the no-gi version:

Although this is in Portuguese, it’s obvious that this is a modified version of the Shaolin sweep, using the torque of the far arm to facilitate the tomo-nage roll. Important notes:

At 30 seconds in this video Guilherme Mendes pulls this off beautifully against his brother in the Abu Dhabi Pro finals (the video was previously included in the inverted DLR post – it really is the gift that keeps on giving):

To perform this technique with a gi, use the lapel and sleeve grip instead. The following video shows a version of this, although I much prefer to use the far lapel instead of the near lapel as shown in the video.

Doing these techniques in live rolling will depend largely on your opponent’s posture and your ability to achieve wrist/sleeve grips. From the basic leg position your opponent will probably attempt to push off one of your hooks. I find that if they try to push off the foot on their hip, you can grab their lead sleeve and arm drag to the back or to sit up to the single leg.

If they try to strip your reverse DLR hook between their legs, you can get their rear hand and begin to work the previous tomo-nage sweep. Most of these sweeps work best when your opponent is in a lower stance. When your opponent stand up high, he or she will often give you space to invert.

This concludes our first post on the reverse de la Riva guard. The next entry will discuss the inverted options that are used in the highest levels of Jiu Jitsu.