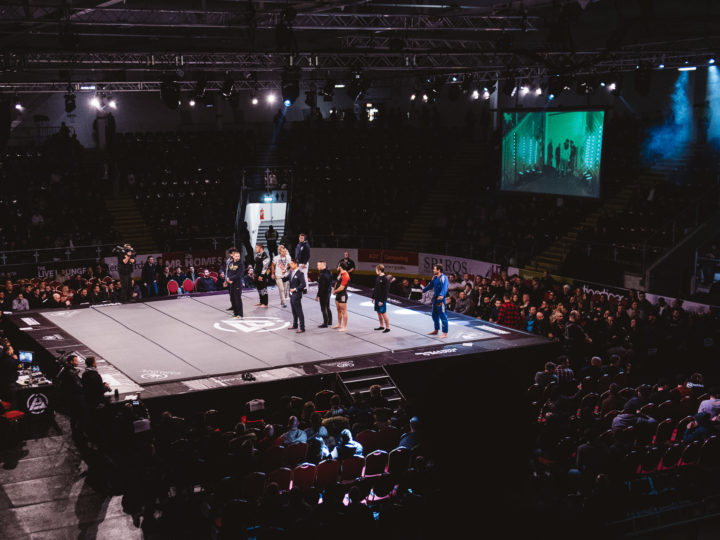 It’s the night after Jack ‘Tank’ Shore won the vacant Welterweight title at the centenary Cage Warriors event and it’s now time for the world’s leading submission only grappling promotion ‘Polaris’ to round off the weekend of the combat sports doubleheader at the Viola Arena, Cardiff.

Our opener for the evening saw ‘The Chocolate Pig’ Ash Amos go up against Chris Rees Academy’s Shane price. The match starts off well with both competitors looking for the pass, with a good back and forth exchange from both fighters. Eventually, Amos passes Price’s guard and secures the mount position. Here he went on to secure the arm triangle from top and get the mount.

Next up was local lad Ben Robson going up against the experienced Jay Butler. This was a fast-paced exchange between the two with lots of action. The match starts off with neither fighter wanting to give up position. Once the match goes to the ground we then saw Jay’s experience start to sneak ahead of Robson, both had their fair exchanges of footlock attacks but it was Butler’s sweeps which ultimately saw him take the Polaris medal. A great outing by Robson, who, as a purple belt, has a bright future ahead of him.

First on the prelim card was Matty Holmes vs Kieran Davern. These two start off with a tough back and forth with most of the match, we saw Matty working for submission from his guard. While Kieran did have some success passing Holmes’ guard, it was Holmes work rate from the bottom which saw him regularly attacking and sweeping earning him the split decision win.

Next up we see up and coming Frederic Vosgrone go up against newly signed Bellator fighter Lew ‘The Foot’ Long. The match mostly ends up with the two fighters in 50/50 with Vosgrone attacking the heel hook, but Lew’s flexibility kept him safe until the end of the match. but Vosgrone’s aggressive attacking saw him win the match.

Our next bout sees another Bellator fighter Paul ‘Redster’ Redmond go up with local fighter Craig Ewers. Graig, a decorated Judoka looking for the trip but it’s always difficult to utilise Judo without the gi. The two exchange takedown attempts and they both have their fair share of guard work and passing attempts but it was Redster’s work rate which saw him take home the win.

This time we see Polaris referee Ed Ingamells go up against Welsh fighter Jamie Hughes. Both have been putting on incredible performances this year, so this promised to be a great bout. The match sees both fighters have their fair share of attacks with Ingamells and Hughes attacking Kimuras. Ultimately it was Ed Ingamells taking home the win when he catches Jamie in a tight heel hook.

Tonight is a stacked card of local Welsh fighters. This time we have Cardiff’s Bryn Jenkins go up against Ash Grimshaw’s replacement Harry McKnight. Bryn looked to use his wrestling and pressure passing to break down Harry McKnight, where he finally took the back to finish McKnight with a smothering Rear Naked Choke.

Our last preliminary fight of the night sees Tom Halpin taken on Welsh UFC welterweight Brett Johns. This match finishes as quick as it starts with Halpin jumping straight into a heel hook to finish the match in 30 seconds. A tight heel hook finish saw Johns sitting on the mat, only to be helped up by his teammate. A big blow for a crowd favourite and we wish him all the best in his recovery.

Our first match of the night sees two gi fighters go at it. Both have impressed previously in their Polaris outings so we were hoping for a classic match. Ultimately it was the 50/50 guard, which was the undoing of this match. Santeri attacked the footlock and was doing enough work for a stalling call not to be called. With two standups due to slow action the match ultimately went to Santeri.

Our first title match sees Seventeen-year-old Nicky Ryan go up against the legend Masakazu Imanari, who replaces Ashely Williams who had to withdraw due to an ongoing wrist injury. The match was a real game of human chess, with both fighters having tight heel hook opportunities, but it wasn’t until Ryan dived to the back where he started to dominate the match. With Imanari not being able to escape back control it was Nicky Ryan who was able to get the win after a smothering Rear Naked Choke.

This ‘mega weight’ bout features Olympic gold medalist Judoka Satoshi Ishii compete against ‘The Raspberry Ape’ Daniel Strauss. From the beginning of the match, it was clear that Strauss had a game plan, to work his patented butterfly guard and not engage Ishii in the standup. The beginning of the match sees Dan riding the back of Satoshi for a few minutes but he later revealed that while Ishii’s defence wasn’t great, his strength made up for it and Dan couldn’t capitalise on the position.

A fun moment comes when Dan shouts to Ishii and the crowd ‘What did you expect?!’ when he once again sits down to the butterfly guard. Dan worked his guard well with a few attacking opportunities which sees The Raspberry Ape take home the win at Polaris.

Our next welterweight title match sees to be a bit cursed. Firstly this match did not feature the original winners Oliver Taza and Ross Nicholls, who were both out due to injury, so we see Mansher ‘Munch’ Khera go up against the last minute replacement, Lachlan Giles.

The match mostly sees Khera looking to utilise him dominant pressure passing to work from the top but Giles’ guard held up to the pressure. Ultimately we saw Munch take home the title, where he will eventually face either Nicholls or Taza.

For me, this was going to potentially be the fight of the night and it didn’t disappoint. The match starts off with neither fighter wanting to pull guard, a dangerous game for Rocha, especially after what happened at Benson’s last Polaris outing. This was a super exciting back and forth between the two with both fighters having their fair share of attacks. Finally, Rocha secures the back position on ‘Smooth Benson Henderson, where he chokes the former UFC champion unconscious.

Our final match of the night sees Polaris middleweight champion Craig Jones looking to become the Champ Champ but first he had to get through Keenan Cornelious.

It was clear Jones had a game plan, where he refused to sit to guard and instead worked his wrestling on Cornelius, with a few head snaps and close takedown attempts it was Cornelious who decided to take the game to the ground. Craig entered one of the best NoGi guards in the game but ultimately was not able to make a pass work. Both fighters were happy to enter the leg lock game but it was Jones who came out the victor on a split decision by the Judges. With two Polaris titles under his belt, it looks like Jones is going to have a busy 2019! 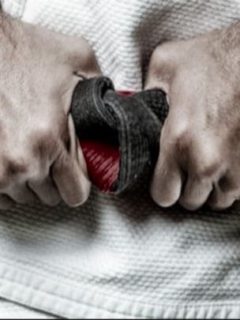 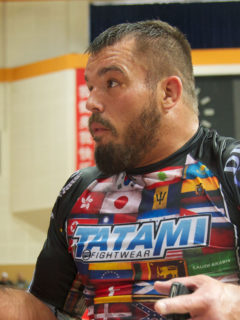 Next
Dean Lister
Comments are closed.