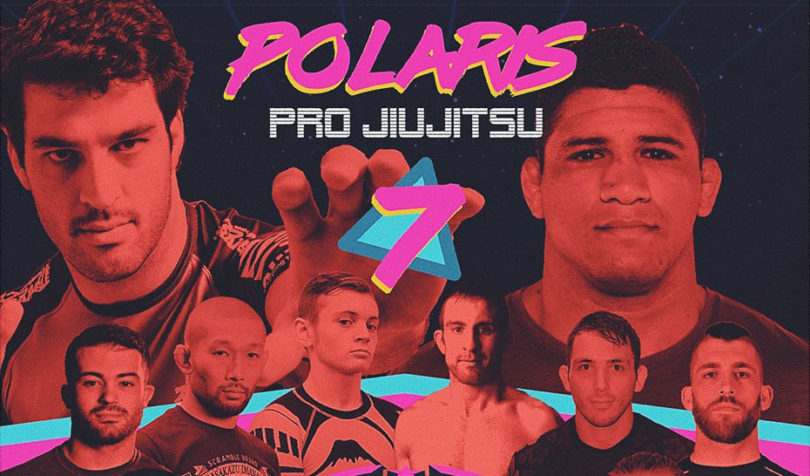 Polaris 7 returns at the familiar Indigo the O2, London and this time, they’re turning the Summer heat up to the max. This exciting card is considered to be one of their best to date, not by the names of their stars but by the caliber of their fighters. We take a look at each match, make our predictions and get ready to enjoy their next event scheduled for July 14th.

In our first preview bout we have Miha Perhavec from ECBJJ going up against Jamie Scott from 10th Planet London. Fighting in a catchweight bout of 85kg, Miha is a brown belt under Darragh O’Connail, while Jamie received his brown belt from Eddie Bravo. ECBJJ have a habbit of producing killer competitors, take Polaris 6 competitor and current brown belt world champion Ffion Davies, who dispatched her opponent to make it to the finals fight Gezary Matuda for the title at the next Polaris event.

This is a match deserved of a main card slot and is promised to be full of heel hooking scrambles and leg locking goodies. Both favour a leg locking style, with Miha’s notable finish of River Dillon in Polaris 5, we know he holds no punches when it comes to finishing the submission.

Pedro Bessa is on a tear up on the local and international competition circuit currently. Taking wins at the recent IBJJF British Nationals and other big name tournaments, we’re expecting the Eduardo Telles black belt to be on the hunt for the submission. As a replacement for the injured Jeff Lawson we see Dominik Debiec step on the Polaris mats for the first time. The Roger Gracie black belt will be coming out to prove himself on the Polaris mat and a submission will make him a name on the current BJJ circuit. Expect this to be a match with no inches given.

Our next matchup see the Sean McDonagh replacement Thomas Caughey go up against Eoghan O’Flanagan. Tom, who is no stranger to international podiums, will be stepping onto the Polaris stage for the first time to show off his nogi skills on the world stage. Eoghan, is a prolific competitor, with a win on the recently Battle Grapple invitational via heel hook. This match is too close to call with leg entanglement served up as a main course.

Oliver Lovell was actually Yousef’s replacement at Polaris 6 after Yousef pulled out after a knee injury. As a rising star in the UK jiu-jitsu scene, we see the Gracie Barra black belt being given 2nd shot at stardom, especially after dispatching his previous Polaris 6 opponent. His opponent is Element BJJ Yousef Nabi, and while age will be a disadvantage against the young Lovell, he has grit and determination on his side. He will be out to prove a point after Oliver took his previous event spot.

Leg locks ahoy in this dynamite bout. Combat Base black belt Lloyd Cooper will be going up against the dynamic Kieran Davern. After his previous loss to AJ Agazarm at Polaris 5 in the gi, we see his next fight in more familiar nogi waters. Lloyd has been competing a lot during 2018 in his run up to Polaris, most notably beating Ffion Davies’ partner Bryn Jenkins at the inaugural Grapple Fest in Liverpool.

Don’t sleep on the Straight Blast Gym Brown Belt Kieran Davern however, he’s no stranger to the submission only ruleset, competing and winning in a number of competitions around the UK. This is going to be an intense foot lock battle with a blink-and-you’ll-miss-it finish.

In this final Prelim preview match we have Roberto Cyborg black belt Tom Haplin going up against Igor Terreco, a black belt under another legend of the sport, Roger Gracie. This is both fighter’s sophomore outing and we’re in for a guard heavy matchup from these two. Whoever establishes their game in this match will be the likely victor 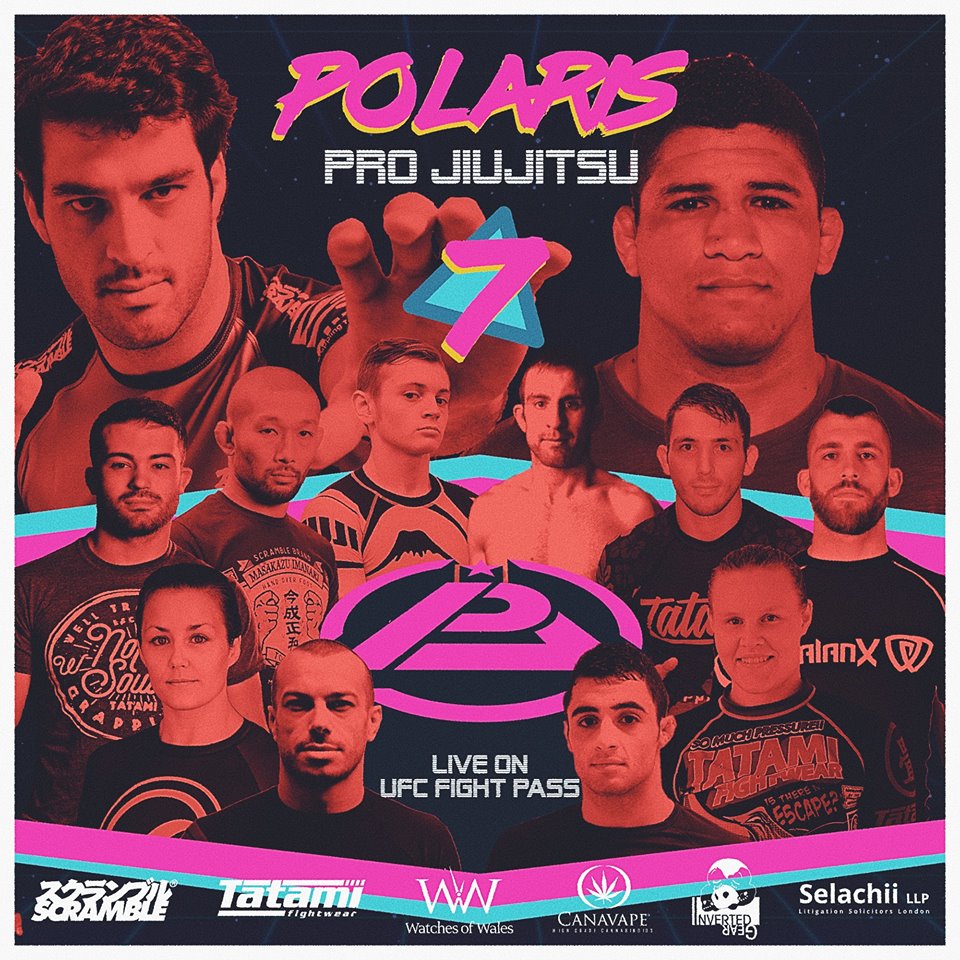 The first main card bout we have is Polaris verteran Samantha Cook going up against Venula Luukkonen. Sam, who recently medaled at this year’s worlds and placed 4th at the most recent ADCC will be going out to get her 2nd Polaris win in this opening fight. Venla Luukkonen, who is actually a primary school teach by day, will have her hands full against the smaller cook, who is likely to be play her favoured aggressive top game against her larger opponent.

Our first featherweight championship eliminator sees EBI veteran and global competitor Ashley Williams face off against MMA, Polaris veteran and all -time grappling legend Masakazu Imanari. While this is Ash’s first time on the Polaris stage, this will not phase him a bit, after competing multiple times on the EBI platform, he knows what it takes to go up against some of the very best in the world and win. While a once and dominating force in the grappling and MMA world Masakazu Imanari’s performance has been somewhat mixed, his recent win at Polaris 5 saw him submit his opponent with a heel hook in a performance that seemed a little lack luster.

This is a battle of the young hungry lion going against the hardened veteran and we’re looking to see Ash take the W here.

Rising Star and Renzo Gracie Purple belt, Nick Ryan, goes up against Polaris veteran Phil Harris in the next Featherweight Eliminator match. One part of the DDS (Danaher Death Squad) and younger brother of Gordon Ryan, Nicky, is no stranger to high-level submission-only battles. After recently dispatching Geo Martinez at Kasai, we’re looking to see him prove a point in this eliminator matchup. Phil Harris has shown time and time again on the Polaris stage that he has a lot of guts and determination, we only hope he’s been watching John Danaher‘s Leg Lock Instructional to study the finer points of Nicky’s game. While strength and size will be in the favour of Phil Harris, he’s going to struggle against the technicalities of the Danaher system.

Our first welterweight eliminator will be a match not to miss out on. If this compares to Ross’ previous match, where he submitted the super-flexible Tommi Pulkannen, this could potentially be the fight of the night. Ross, will be going up against EBI veteran and decorated 10th Planet black belt Nathan Orchard, a fellow nogi, foot lock specialist. This is going to be another footsie battle, with both fighters looking to get the win. However, this is a match is too close to call, but we all know who will be the victor in this match, the fans.

Goddamn this card keeps getting better and better. We now have current Polaris middle weight champion Craig Jones‘ Absolute MMA coach Lachlan “Velociraptor” Giles go up against Oliver Taza, another decorated member of the Danaher Death Squad. This is an entertaining clash of style, with Giles favouring submissions from the upper limbs and neck, while Taza favours the lower half.

If Giles can dispatch his opponent he will then have the opportunity to take another Belt across the pond to hang in his gym.

In our final match we’re turning the heat up to full blast as we see the explosive Gilbert Burns go up against the aggressive Gregor Gracie. Look out for wrestling and take downs galore in this final matchup, hopefully we won’t have anyone fly off the stage like Polaris 6.

This will be a perfect round off to a Polaris card that stacks up as one of the very best to date. It’s going to be hard for them to match this card for a long time. Tickets are going fast, so if you want to be part of the action live, you grab yours here.