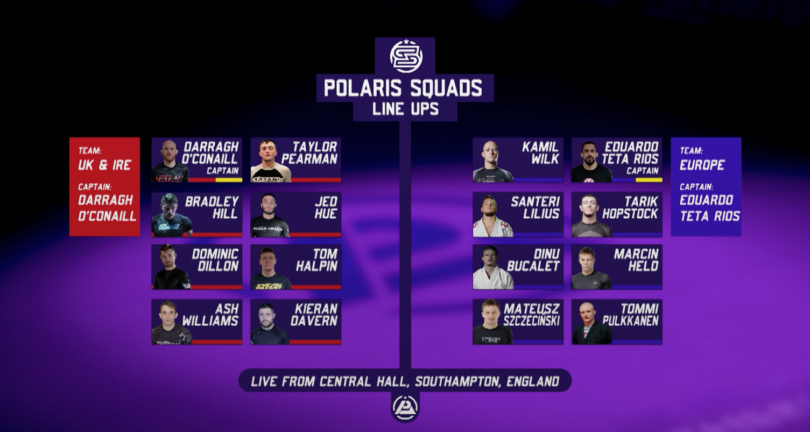 Polaris returns for their 14th edition behind closed doors in Southhampton, this time with a completely new format. Born from the Sakuraba’s  Quintet team grappling event, Squads looks to put the best grapplers from the UK and Ireland against the best grapplers from Europe. Lead by Darragh O’Connail and Eduardo ‘Teta’ Rios, the rules are simple, winner stays on, a submission win is 1 point, if a lighter squad member submits a heavier squad competitor, that equals 3 points, no submission equals a draw and both people are eliminated.

The match sets the tone for the whole Squads format, fast-paced action with both competitors trying to get something out of the limited 5-minute round format.

The match starts with Ash looking to use his patented arm drag to trip takedown which he is famously known for. After a few failed attempts, it was obvious that neither competitor would settle for being on the ground.

During the match, Teta manages to get a single leg on William, only for Williams to use it as an opportunity to set up a flying triangle, which he attempted to turn into a guillotine to no avail.

The match continues with more wrestling, up until the last 15 seconds where Ash attempted a scissor takedown on Teta for a hail mary heel hook to no avail.

The second match of the first featured Brad Hill going up against the relatively unknown 25-year-old Polish competitor Mateusz Szcecinski.

The match starts with Szcecinski attacking a straight foot lock, which really sets up a lot of the match. Szcecinski loots for various setups from the bottom to try and enter a leg entanglement.

The closest either competitor gets to a submission is Szcecinski attacking a kneebar that Hill has the defend hard and Hill attacking an Estima lock.

Unfortunately, neither competitor manages to get anything off which results in a draw.

At the beginning of the match, both competitors look to sit to guard, where Jed comes up to look to pass.

Kamil Wilk has an interesting cross leg setup for his leg entries, where he also utilises the straight armbar to disrupt hue’s base. Wilk does well to keep on the offence with Hue defending very well. At 2 minutes Jed looks to push the pace to get a more secured position.

At the end of the match Hue manages to pass and get to mount, only for Wilk to defend heavily to run the buzzer out.

An excellent match that I would like to be rerun under the traditional Polaris ruleset.

Once again the match starts off at an incredibly fast pace with Davern sweeping Held with the butterfly guard, straight armbar combination, which sees Davern setup a tight head control position.

Held does have some moments, most notably a tornado sweep into the kneebar, which Davern defends. With 30 seconds left Davern attacks a guillotine only for the time to run out on him

Our next match sees the aggressive Taylor Pearman go up against the Polaris veteran Santeri Lilius.

The match sees Pearman working his bottom game with Lilius looking to pass, a key moment comes when Pearman manages to debase Lilus and scrambles up to take down Lilius, which puts Pearman in troubling toehold position, which he escapes.

Ultimately the match finishes in a draw, but excellent action from both competitors.

The match continues with Halpin playing guard and Bucalet looking to pass until Halpin sets up a beautiful reverse triangle to get the first submission of the night.

Both competitors have moments where they are able to try and attack a footlock, but neither competitor manages to get anything to work. Most notable highlight was Pulkannen attacking a tight Estima lock on Halpin during the last minute.

This match again goes at a frantic pace where the veteran Darragh O’Conaill goes up against the fresh faces Tarik Hopstock.  The match sees Hopstock play a lot of guard to try and get something working. Hopstock using an attempted foot lock but to no avail.

Darragh looks to use his patented guillotines to try and get something to work but ultimately neither competitors are able to get anything to work.

The final match of the first half sees Dominic Dillon go up against Mateusz Szcecinski. This sees Szcecinski with an early back take on Dillon, where this is where the match stays. Dillon does a good job defending with the 2-minute time limit to squeak the match to a draw.

The match starts off tentatively with both competitors feeling each other out. Loska looks to pull guard, where Ffion looks to pass.

Using her patented knee cut pass, Davies blasts through Loska’s guard to get the side control. From there Davies opens up the back to chairsit to the back and this is where the match stays.

With Davies looking to create misdirection by isolating an arm Loska exposes her neck to allow Davies to attack the rear naked choke, where she submits Loska within 4 minutes.

Back to the main event and it sees two of Europe’s most dangerous competitors go up against each other. The match starts with both guys looking to stand and get something to work. With Marcin works an inside trip only for both competitors to stand up.

Williams keeps on the offensive with a flying triangle attempt where Williams trys to attack an omplata only for Held to escape. The two competitors eventually go to the ground where Williams plays butterfly guard.

The most significant moment comes when Held managed to attack a deep knee bar attempt, which causes Williams to grimace heavily but not tap.

After match Held says he heard Williams’ knee popping, but without the tap it means nothing.

Another match I would like to see under the full Polaris ruleset.

Next up we see two under 95kg competitors Keiran Davern go up against Tarik Hopstock. The match sees Hopstock look for for a footlock with Davern constantly defending.

The match continues with Hopstock attacking various foot locks but to no avail.

Our third match of the  2nd half of Squads sees Brad Hill go up against Kamil Wilk, where there is a 23kg weight difference between the two competitors.

The match sees Wilk on the bottom using the straight armbar attacks that he used well in the previous match. Brad looks to pass aggressively but he struggles to get past Wilk’s guard.

This match is a typical leg entanglement match between two dangerous foot lockers. The match sees a few footlock attempts and inversions between both competitors, but ultimately neither competitor manages to get a decent bite of the apple.

This match really shows off the high-level ability of leg lock defences.

This match sees Tommi Pulkannen looking to work hard to get a submission against Dominic Dillon with an early backtake which Dillon manages to defend well.

The match then sees Pulkannen pass Dillon’s guard with Dillon looking to attack the straight armbar at the end.

Squads is one of the few formats where the young guns can go up against some legends in the sport and this is a perfect example of this.

Pearman attacks an omoplata early into the match which forces Teta to defend heavily and eventually escape.

The match slows down after the early attack with Pearman attacking single legs off the bottom but it eventually comes to nothing.

Lilius stays on top with heavy top pressure but ultimately returns to O’Conaill’s guard. While Lilius does work the top game very well and secure a heavy guillotine attack, he’s unable to get the submission.

After his getting his knee popped by Held in his previous match it’s a shock to see Williams to go out in the last round.

The match starts off well on top, which sees Dinu dive on a Kimura and heavily attacks the armbar on Williams only for them to go out of bounds and have the match reset in the middle, a close call for Williams.

The match resets standing where Williams is able to attack the jumping guillotine where he uses the chin strap to get on top.

After a reset in the centre, Bucalet manages to get back to his feet, where Williams is able to attack a flying triangle and turn it into a beautiful flower sweep into mount much to the joy of his team.

The two scramble for the last ten seconds which ultimately sees the two go to a draw.

While there was only one submission of the night Polaris Squads in a ruleset over year in the making and the fast-paced format of the show meant there was action from start to finish. An excellent introduction into the new Squads format.