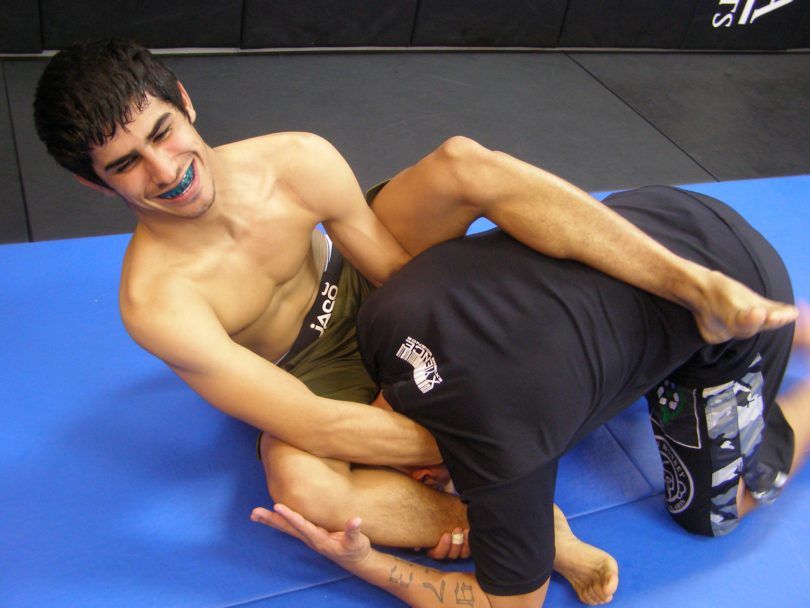 A Crank and a Choke

Peruvian necktie can be used both as a choke and a crank depending on the angle as well as your hand placement. In some instances, it’s both a crank and a choke. It has been proven effective not only in nogi BJJ but even in MMA during intense scrambles.

Mechanics of the Peruvian Necktie

To be able to hit the Peruvian Necktie, it is important to use not only your arms but also your legs. One of the most detailed concepts available online comes from Keenan Cornelius.

Keenan mentioned that it is not really about the arms that make Peruvian necktie work. It is different from your arm-in guillotine that requires a lot of muscle. Instead, this version makes use of both legs to make the choke/crank work.

So how do you get the Peruvian necktie to work? The configuration typically looks like your darce choke. However, instead of sinking the choke deep and being able to grab your bicep, you only get a gable grip. This way, you have something that is under the neck which works similar to a guillotine. However, instead of squeezing, you will use one leg to push the head down.

This leg is going to generate most of the pressure to keep the head closer to the clasped hands. Next, you will have to extend the leg and drop your hip to the mat. By doing so, you are concentrating the pressure on the neck. However, in this situation, the person can still roll over and possibly create a scramble position and escape. This is why it is equally important to throw the other leg over and have it on your opponent’s back.

Keenan added a detail to make the choke stronger. This detail makes his Peruvian necktie different from other instructionals online. Instead of leaning on the side of the hacking hip, he transfers his weight on the other side (side of the leg over the back). This allows more space for the hacking leg to push down and put pressure on the choke.

Playing with nogi chokes can be tricky. It means that sweat and explosive movements can sometimes outmaneuver technique. One common counter for the Peruvian necktie is to push the leg that is over the head. This removes the pressure that gets the neck pressed towards the hands.

The next best move from this position is to either sink your arms deeper and go for a darce choke or simply go with an arm-in guillotine.

For gi enthusiasts, it is also possible to use this choke to finish your opponent. However, one of the best variations comes from Yarden Gerbi who is an Israeli women’s -63kg judoka World Champion. For this variation, it is typically used in judo to attack an opponent opting to turtle. A lot of people turn to turtle position to stop the action, which is why this move makes perfect sense for judo.

To set the choke, you first need to get your lapel off. The gi goes under the armpit of your opponent and then passed all the way to your own hand. This variation gives you the chance to have a free hand instead of having both hands actively clasping for the choke. In addition to this, you can also have a good grip on your lapel which makes it harder to break in case your opponent tries to defend the position.

To complete the sequence, you will also have to get one leg over the opponent’s head. This brings the neck down in contact with the lapel and your arm. And to prevent the person from doing a front roll, you will also need to get the other leg over the back of your opponent.

Unlike the regular Peruvian necktie where you have the option of a darce choke or a guillotine in case your opponent removes the leg, you have a loop choke that you can work with.

Why Learn the Peruvian Necktie?

Though it is considered a rare submission, why learn the Peruvian Necktie? Is it worth the effort to try pull this off during tournaments or in live sparring? Compared to other arm in and front chokes, the Peruvian necktie is harder to pull off. There’s a reason why not a lot of UFC fighters use this in an actual fight. However, it can be used to widen your attack options from different scenarios.

Peruvian necktie can be used as a Plan B attack coming from a Darce. Also, it can be used to mask a guillotine submission. You can even use it during scrambles especially after sprawling a takedown attempt.

In addition to this, one thing that makes Peruvian necktie a good option is that you don’t need to muscle your attacks. Instead, you will be using your leg to get the neck to meet the hands. That’s more efficient compared to using your arm muscles cranking someone’s neck in an arm-in guillotine.