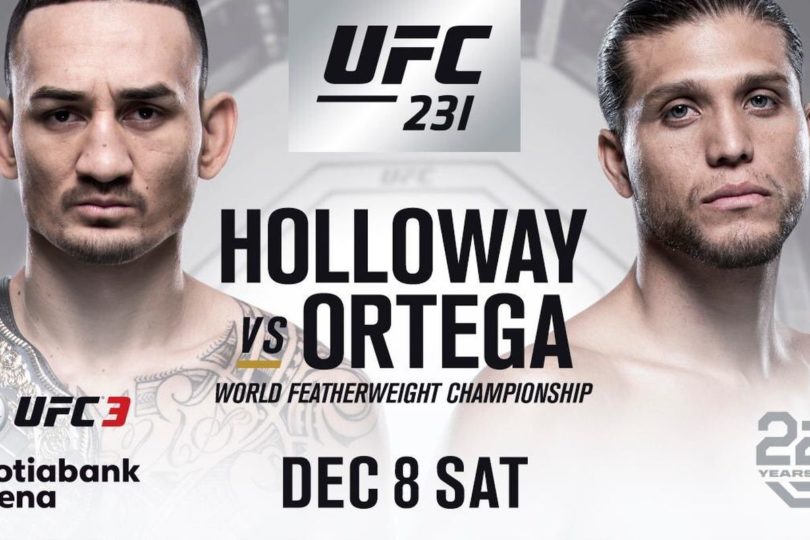 The 231st edition of the Ultimate Fighting Championship goes off on December 8 at the Scotiabank Arena in Toronto, Canada. At the end of another entertaining year for MMA as a whole, there is a top night in prospect as the curtain comes down on 2018.

There is a packed card in store but at the end of the night, there is one clear highlight.

A total of 14 bouts are in prospect at UFC 231 and it all begins with the early preliminary card as John Makdessi and Carlos Diego Ferreira get things underway in the lightweight division. Five fights are in prospect in this section, ending at bantamweight level with Brad Katona versus Matthew Lopez.

From there, we head to the main preliminary card which begins with a match-up between Eryk Anders and Elias Theodorou in the middleweight division. A series of four fights in this section finishes with welterweights Alex Oliveira and Gunnar Nelson battling it out.

Nine fights in and we finally get to the main card for UFC 231 where there are a number of key contests in store. This particular section begins with a light heavyweight clash between Jimi Manuwa and Thiago Santos and, just prior to the big event of the night, we have one of the most important women’s UFC clashes of the year.

The female version of the flyweight championship title is currently vacant but that will change at UFC 231 with Joanna Jedrzejczyk and Valentina Shevchenko entering the Octagon. Both women have enjoyed great success in other weight divisions and as we come to the end of a long evening, their battle is the perfect prelude to the main event.

The fight between Max Holloway and Brian Ortega is one of the most anticipated bouts in recent UFC history. Holloway is the reigning UFC featherweight champion and his title will be put on the line with Ortega anxious to take it away having been made to wait for his chance.

The fight was originally set to take place at UFC 226 but Holloway was forced to withdraw after suffering symptoms that were said to be similar to concussion. He’s back in the Octagon in December with a patient Ortega waiting in the opposite corner but which fighter will emerge with the world title at the end of the evening?

Tale of the Tape

The markets are tight ahead of the first bell but it’s reigning champion Holloway who will start as clear favourite in the UFC betting for this contest. The 26-year-old American is an odds on option across the board while his Mexican opponent Ortega is a few points behind.

The odds setters have their opinion but the respective records of the two men suggest that things are going to be very tight on the night. Holloway comes to Toronto with an overall history of 19 wins from 22 professional fights and 11 of those victories have come inside the distance.

Ortega makes the trip with no defeats at all in his pro career: 14 of his 15 fights have ended in victories for the 27 year old with the remaining bout declared as a No Contest. Ten of those 15 wins have come before the end so, while Max Holloway may be the better fighter, Brian Ortega is here to pose a significant threat.

A number of pundits are pointing to experience as one area where Holloway has the clear edge over Ortega. The Mexican has just those 15 fights in a brief career and hasn’t really come up against anyone of the same calibre.

MMA fans also point to Holloway’s superior striking ability along with movement and reach that Ortega cannot match. He’s also likely to be better prepared for his opponent’s tactics and will be aware of the strong record Ortega possesses in terms of submissions.

Holloway for the win seems the obvious choice but it could be tight. All we know for certain is that the fight is a worthy headliner for UFC 231 and if it lives up to its billing, it could be one of the most entertaining battles of the entire year.