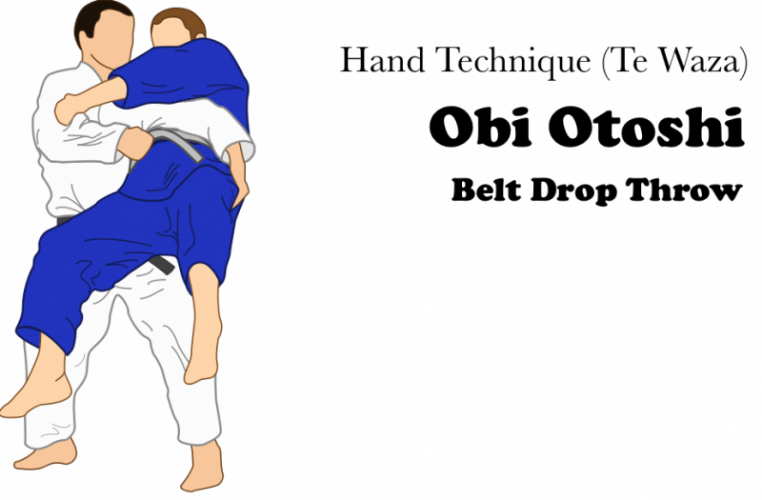 The Obi Otoshi is classified as a Te Waza or a hand technique and is one of the preserved throws listed in the 1895 Gokyo No Waza list. It’s a rare feat to pull off Obi Otoshi in actual sparring; however, it is still something that every judoka should know.

Obi Otoshi which translates to a belt drop is something that looks similar to a Sukui Nage or a scooping throw. The only difference is that the tori will grip on the belt. For the Sukui Nage, you get the tori to grab the leg instead of the hip instead of the belt..

How to Perform the Obi Otoshi

There are different ways of how a tori can grab the belt. It can be palm down or palm up depending on the tori’s preference.

Next, the tori will then move towards the uke’s side. As a rule of thumb, if you grabbed using your right hand, you want to be moving to your left. The tori needs to end perpendicular to the uke. This gives the tori a chance to let go of the tricep grip and switch towards the hamstring of the uke. The hamstring that you are going to hold is on the opposite side of where you are.

If you are grabbing the belt with your right hand, your left hand is going to connect to the uke’s left hamstring. Simultaneously, you are going to lower your base and keep your back straight. On top of that, your chest should be in contact with the uke’s body to create the connection making it easier to lift the opponent and finish the Obi Otoshi.

Reasons why it is hard to pull off the Obi Otoshi

There are a lot of reasons why it is hard to pull off the Obi Otoshi. First, you have the fact that you are grabbing the belt. Different judokas tie their belts differently. Getting four fingers inside grabbing the entire fabric around the waist can be challenging. On top of that, you can also deal with belts that aren’t tied well. There are instances when judokas will have to retie their belt when the referee resets the match. It means that losing the belt means losing your chance to throw your opponent.

Next, getting perpendicular to your opponent is a difficult adjustment to make especially if you are up against someone who is experienced as well.

Ideas on How to Setup the Obi Otoshi

You can use the Obi Otoshi as a counter to your opponent. It is a perfect counter against someone who is going for a hip throw or an Uchimata. However, it is also a risk because of you rely on your opponent twisting his or her hips too much. There is a chance that your opponent can finish the throw getting you to the mat before you were able to successfully pull the Obi Otoshi.

How do you pull off an Obi Otoshi as a counter? As your opponent is turning his or her hips against you, take this opportunity to disengage and create space. Here, you are already perpendicular to your opponent. All you need to do is to grab the belt and opt to either grab the hamstring over the body or just hug the hip as well. In this scenario, you can counter using the Obi Otoshi if you crated some space between you and your opponent. Also, you can easily switch towards a Sumi Gaeshi and just drop to your side.

Apart from doing counters, it is also possible to have this as a Plan B for your other throws. There are instances when you find yourself perpendicular to your opponent. For instance, if you failed to hit a Sukui Nage, then you can switch towards the belt to add leverage to your lift.

Concerns when Performing the Obi Otoshi

This isn’t exactly a popular move among judokas. It takes a lot of effort to lift the opponent up in the air and to get him or her to the mat. On top of that, the time you end up perpendicular against your opponent, there is a chance that you will be the one to get thrown.

To improve your chances when hitting Obi Otoshi against an opponent, mask it by doing different foot techniques to the point where your opponent is stepping back. This makes it easier to circle the opponent using the collar and sleeve grip. Once the uke is trying to find his or her base, you can have a chance to cut the distance, grab the belt and even finish the move.

You also have to account for the fact that this move is hard to do in practice since it creates injury-prone scenarios for both the tori and the uke. There are instances when the tori can also get injured. Poor body mechanics of lifting an uke can lead to an injury. On top of that, bending the knee right behind the opponent’s leg can spell disaster especially when executed by a novice player. There is a chance that the uke can get off-balanced and prematurely fall on the tori’s knee causing an array of injuries. It can torque the knee and end up in a minor sprain or something worse that needs surgery.

The Obi Otoshi is a low-percentage throw that won’t be available in most situations in your randori or competitions. It is something that is highly discouraged to be taught to beginners considering their lack of coordination. But though it is something that you rarely see, judokas should still learn this throw. You will never know when this move is going to be available for your disposal.