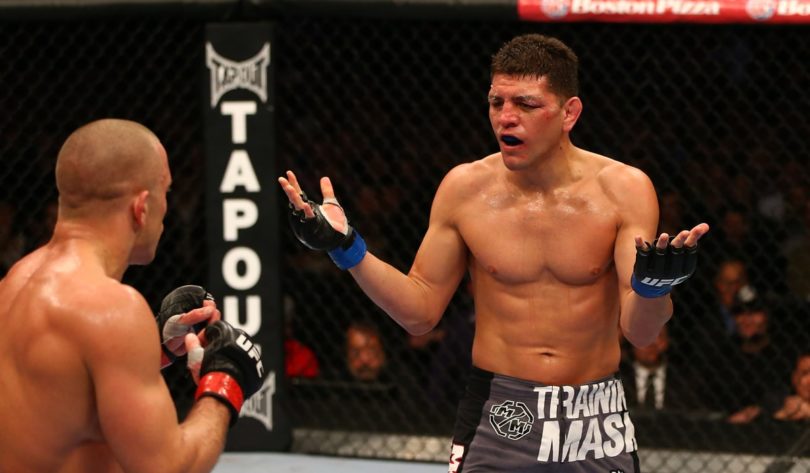 Nick Diaz. One half of Stockton, CA’s finest brotherhood. As polarising, and as complex a figure as you could imagine finding in the tumultuous 209. Diaz turned his life to professional fighting rather than just street fighting. Nick, a Cesar Gracie black belt omits the class and humility expected of a regimented jiu-jitsu fighter. That humility however, is laced with the raw, bulldog ferocity expectant of a man that has lived the life that he has.

Nick Diaz is revered for many things. His performance against Anderson Silva, laying down in the cage, bored due to the passivity of the action. His absolute war with Paul Daley. A gogoplata against Japanese legend Takanori Gomi, in Pride whilst high as a kite. Strikeforce: Nashville, need we say more? The encounters with GSP. Finally of course, the interviews and press conferences. The list could go on and on, of the fabric in which Nick Diaz has sewn his name into the folklore history of MMA culture. In the tapestry of MMA, he stands, bold, proud with his fists aloft his eyes, grimace shining, ready to scrap.

Diaz began his professional MMA tenure in 2001. 4 fights in, and 4 finishes later he met Jeremy Jackson, a man that in his own pro-debut had met future “Skrap Pack” member, Jake Shields (losing that encounter to a 1st round rear naked choke). Diaz was handed his first professional loss at the hands of Jackson with what was his only stoppage loss that needed referee intervention. Diaz then carries on, fighting 3 more times, before meeting Jackson twice in the space of 3 months, and finishing him twice. Once by TKO, and once by Armbar. Between 2004-2015 Nick fought every name he could find. The aforementioned Silva, GSP and Gomi. Carlos Condit, B.J Penn, Paul Daley, Frank Shamrock, Robbie Lawler, Sean Sherk and Diego Sanchez to name a few.

What truly embodies Diaz is a dichotomy. The gritty, snarling never say die attitude, marred by an almost raging disdain for fighting. He is famously quoted the likes of:

“I’m not in love with fighting. I never was. That’s crazy. I don’t love to fight; I don’t want to fight. I get my ass beat more when I win a fight than when I lose. I know you don’t want to get your ass beat.“ and “I got my ass kicked in a sandbox by some kid when I was six years old. This Mexican kid whooped my ass. I was so pissed. I was bleeding, sand all over mouth. I was so pissed. I didn’t like it then, and I still don’t like it now. It’s all fun and games until you get in there and try to fight somebody.”

“I don’t enjoy fighting. I don’t use that word (excited) in this sport. I use that word like maybe I’m starving, and food is showing up. I’m getting excited. That’s excitement. Or I’m excited to have a couple of days off. I’m excited to fight somebody? I don’t know if people are confused with that term when it comes to fighting.

The brashness in which he delivers his words, sometimes mask the depth of what he is trying to say. The ambivalence he wrestles with, feeling drawn to fighting as that is all he ever known, whether it be the undertaking of physical or emotional battles. But knowing that the same thing he is drawn too, will further the pain he is in, from both standpoints.

The career of Diaz seemed to draw to a close after his loss to Anderson Silva. A positive test for Marijuana resulted in the NSAC attempting to ban him for life. Silva, had already tested positive post-fight for anabolic steroids. The champion was handed a one year ban, accompanied by a large fine. The controversy was rife, for a man to be banned for “life” over Marijuana, and another be given a year’s ban for anabolic steroids. You can only imagine how that injustice compounded into the brain of Diaz, with all of his history of injustices, struggling to reach stardom, financial freedom, and validation through the medium of fighting for 14 years to be turned into a cold steel door, shut out into the cold once again.

At the same time of Nick’s downward spiral from the sport, his brother, Nate had just begun to walk his path to stardom. January 2015 was Nick’s final fight. December of that same year saw young Nate put on a career best performance against Michael Johnson and take the mic to deliver one of the most famous post-fight callouts of UFC history. Onward came Nate’s stardom, stepping out from the mould of little brother Nathan and into the Conor McGregor saga, the BMF belt, his own financial freedoms and the weight of upholding the Diaz name. Bittersweet for Nick.

The psychology of being an older brother, of being the dominant sibling, the father figure. To have laid the path for his brother with blood, sweat, tears and yet to watch on the side-lines as the same brother he never wanted to introduce to fighting, the brother he felt deep remorse and regret for embellishing in this life, rose to riches before him. Rose to validation and earnt almost everything that Nick had worked and dreamed for.

Nick’s personal life then began to seemingly spiral further, frequenting Las Vegas and proliferating his Instagram stories with his partying, MMA fans not only saw the true end to their once beloved cult hero, but also feared for Nick’s mental well-being. ESPN reporter Ariel Helwani sat down for a long conversation with Nick in 2019, and whilst the rambling streams of consciousness are nothing new from Stockton’s own, there felt something more sinister behind the words this time. He spoke then of targeting a comeback, to which nothing come to fruition.

Fast forward then, to last week when Nick’s manager, Kevin Mubenga reporting to Ariel Helwani that Nick had just finished a 14-week training regimen and a test weight cut. This had landed him in the 165-175lb range. Evidence was provided, showcasing a video of Nick moving around and appearing in great shape. Doubling down that Nick will fight again and that the camp is targeting an early 2021 return. One Conor McGregor has thrown his name into the hat, Jorge Masvidal must also be in that conversation, with Nick having been vocal about wanting to rectify his brothers loss at the hands of Masvidal.

Its commonly believed that Nick was made a scapegoat for his Marijuana ban. Coupled with the rise of his brother, the advancement of MMA and its fan base, and then the turbulence of his personal life. Does the star power of the Diaz brand, and the Nick Diaz name translate into modern day MMA economics? Or are we looking at a final plea to quench the thirst that drove Diaz to the pinnacle of the sport in his first run? It looks like we are about to find out.