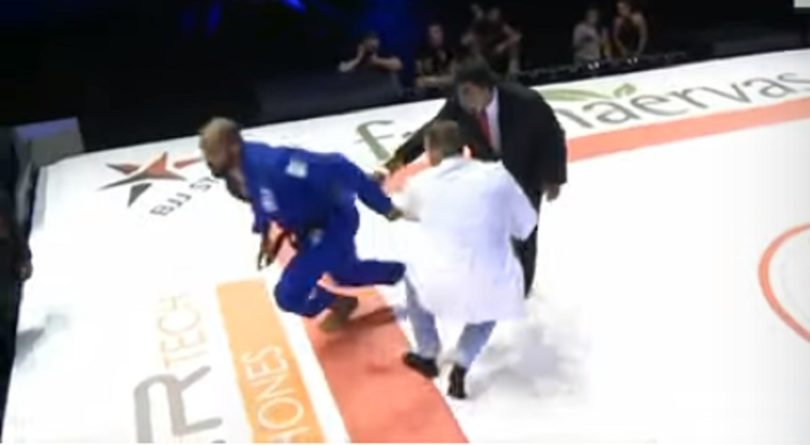 Last night was the inaugural BJJ Stars event, which showcased the best of the best in Jiu-Jitsu. When a show features Leandro Lo, Marcus Almeida Buchecha, and other huge names, you know it’s going to be an amazing event. And it was, it really really was…

The BJJ Stars event saw some major upsets happen before chaos ensured, first off we had Nicolas Meregali vs Leandro Lo, where Meregali’s top game and takedowns were too much for Lo, who has had a long time off competition since he dislocated his shoulder at. Meregali forced Lo to sit and play guard, but it Nicolas’ crushing top game which was the deciding factor. Ultimately Meregali managed to pass Lo’s guard to win the match 4-0.

Next up was João Gabriel Rocha who was up against the 5x Absolute champion Marcus Almeida Buchecha. After a hugely intense battle, all over the raised matted area, it was Rocha’s grips and control that were the deciding factor, Rocha went on to defeat Buchecha by 3 advantages.

Finally, it was the turn of Felippe Preguiça (Pena) up against Erberth Santos. While Pena was looking for an X-guard sweep, Santos called time to the match claiming his knee had been hurt from Pena pushing on the joint. Santos, known for his antics, suddenly has a resurgence of life leapt into action, off the stage to assault someone in the crowd, Fernando Pena, Felipe’s younger brother.

Erberth comes in with a flying kick, hitting the bystander and a woman who was next to him as both stood on the sidelines. All hell then brakes loose with a few of Guigo Jiu-Jitsu’s team members who were sitting close to Fernando and the lady tried to separate Santos from Preguiça’s brother.

Unsurprisingly the world jumps straight on social media to voice their opinion about the event.

Known for his social media personality, Gordon Ryan hits his point straight home. “So lets get this straight. You literally quit every match that doesn’t go your way. You tap to mount, tap to fake leg locks, tap to sweeps. Youre the softest “gangster” I’ve ever seen.

How are you gonna say your knee is “hurt” then proceed to spring to your feet and launch into a full sprint off the stage to fight someone to get yourself out of yet another match you had no chance of winning. I know soccer is big in brazil but you must have forgotten this is a combat sport. You cant fall over crying everytime someone touches you. This is the softest most unprofessional shit ive ever seen bahahaha. Stick to chasing chickens back on the farm my child and never come @ me again because you’re not even worth my time. ??”

“First of all, we would like to apologize to all those who witnessed the end of the event that took place on February 23rd. We do not cope with any kind of physical aggression, jiu-jitsu is, above all, a martial art that over the years has become today a sport and that in soft art seeks the evolution of being in all aspects of life, something different from what occurred in this final night. Sincerely, we apologize.

Unforeseen happenings, as every event happens, be it in any branch. We know this and we seek, even in the situation that occurs in Brazil of financial difficulties, to present to all lovers of art, the appreciation of the sport and athletes before everything.

We have been producing black belt events since 2002, always aiming to value the athlete and our art, we have held several events in a public and private partnership, Bjjstars, and in the spirit that everyone knows, to bring jiu-jitsu back to Brazil , and put at the top the sport so little valued.

We never seek such failures, we intend to value you fans, you athletes and jiu-jitsu lovers, that was, is and always will be our greatest goal. We want to thank everybody for being there, you’re a spectator who has had some difficulties with pay-per-view, you’ve come to the event and you’ve come to see the biggest and best card ever made in jiu-jitsu history.

We want to thank the athletes who gave blood and race in the very hard and high-level jiu-jitsu fights, you are examples to be followed, they shape the character of children, they stimulate adults and as we saw the live example of Mr. Gerardo, it enhances the maturity of life.

Our thanks, our apologies, and head up we will review the mistakes, adjust the main points and we will return in the second edition of BJJSTARS BLACKBELT EDITION with a learning and energy to seek to provide you with an excellent event. Oss”

But it wasn’t just BJJ Stars that agreed with Ryan on his post. Michelle Nicolini, who was actually competing at the event, and Edwin Najmi both came out to agree with the fighter “So true..” Said Michelle, while Edwin simply states “Erberth is a bum.”

Here are the full results for the main card: