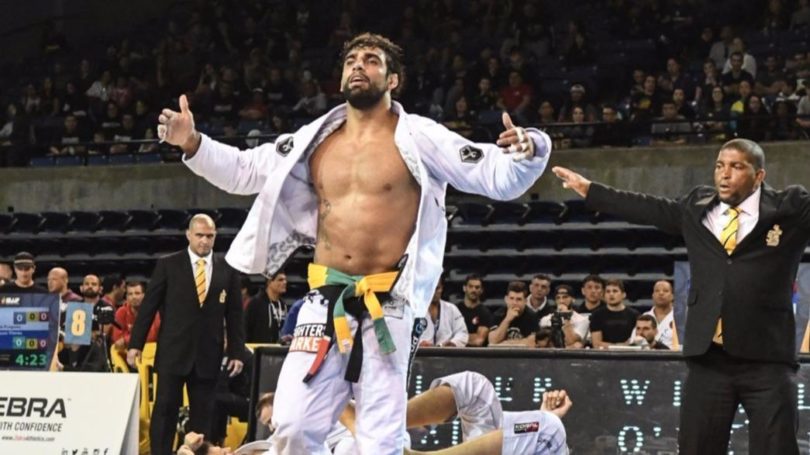 The lean figure in the patched up white Kingz sidesteps around the mat with arms outstretched. Time and again he circles until he finds his comfort zone. Suddenly the competitor’s demeanor shifts as he shuffles forward to engage. His white tape interlaces the fingers on the hand that snaps out as he sets his right hand gripping the lapel of his opponent’s gi. His left hand reaches out for the sleeve. Sometimes his opponent pulls guard, sometimes he does. Leandro Lo Pereira do Nascimento dominates from either position.

In Jiu Jitsu we always joke about the fact that there’s probably an underprivileged Brazilian kid somewhere destroying everyone but who can’t afford to come to the United States to compete in the big IBJJF tournaments, so no one has heard of him. That kid was Leandro Lo, who came up in Cicero Costha’s Lutando Pelo Bem (The Good Fight) program. Until 2011, when Lo defeated the then Mundial champion, Michael Langhi, most Jiu Jitsu fans in North America had little knowledge of the young competitor from the east side of Sao Paulo.

Now Lo is widely recognized as one of the most dynamic and consistent lightweight competitors in the world. Best of all, Lo’s hectic tournament schedule allows us many opportunities to observe the techniques that have brought him to the top of the Jiu Jitsu world.

I love the videos of Brazilian competitions that surface from time to time. The footage is washed out and grainy, the mats are brutal and seem to collect a quota of broken toes and fingers. Seriously lo-fi stuff. But the crowd is fired up and the Jiu Jitsu recalls a time when it was still a fighting art. In a way these competitions are like Lo himself.

The matches of Leandro Lo are variations on a theme; he seems at his best when elements of his game can be repeated, advanced and repeated again like a composer working on an orchestra. If you’ve seen a few of Lo’s matches you can already predict what techniques are about to happen.

On his back Lo is rightfully known for his spider guard, specifically his almost unstoppable spider-X guard combination. If his opponent pulls guard, he will likely grip both pants with his unique neutral grip and try to toreador pass, including a signature variation that we will focus on later in this article.

Alternatively, Lo may stuff his opponent’s leg to drive through for a kneeslide pass. Once passed we’re going to see Lo get on the back or mount, where he is just as likely to go for a collar choke or a triangle from either position. It might seem anticlimactic to know what’s coming but the joy in watching Lo compete comes from the subtle variations that he is able to pull off on some of the best lightweights and open weight competitors in the world.

Part of the reason we have so much footage of Lo competing is his unrelenting tournament schedule. Some guys it seems like every bit of rare footage is worth its weight in gold. But trying to do a comprehensive study of Lo’s matches is overwhelming.

Many of these matches lately have taken place at less well known Brazilian tournaments such as the Brasileiros, Pan Americano, Copa Podio and The Best Fighters. It’s important for us as students of Jiu Jitsu to seek out these non-North American tournaments to see the best fighters and techniques coming out of Brazil.

For example, if you waited until they competed in the United States you would have been missing out of many great matches from Lo’s Cicero Costha teammates the Miayo brothers. Competing as much as possible clearly gives Lo an edge over his opponents, as do his highly cultivated techniques, of which he uses surprisingly few.

These few, however, seem to work on a wide range of high level opponents.

It would be misleading to suggest that Lo’s game is merely a collection of well-honed techniques. Lo’s Jiu Jitsu is also infused with a multitude of intangibles, such as lightning-fast re-guarding and guard pass prevention as well as unreal balance and sweep defence. It’s hard to study his game to suggest ways to practice these intangibles because he often breaks some of the key “rules” of Jiu Jitsu.

For example, when playing on top Lo stands with straight legs, bent at the waist. And he almost never strips his opponent’s cross-collar grip when his posture is being controlled in guard. Instead he just dances around their sweep attempt before whipping into his signature toreador pass.

But there are a few things we can take from watching Lo’s defensive Jiu Jitsu. He is uncommonly loose and relaxed, allowing him to quickly react to his opponent’s slightest movement. When in guard, he almost always has a grip on the collar or sleeves, preventing his opponents from gaining posture to initiate pass attempts.

Alternatively, he may sit with a loose de la Riva guard waiting for his opponent to give him the margin of space needed to transfer to the X guard.  When his guard is threatened Lo is able to quickly pummel his legs into the inside space to prevent the pass.

There are a few drawbacks to Lo’s game, however. While he is difficult to sweep, it’s not impossible. Lo seems particularly susceptible to single-leg sweeps and takedowns, such as those used against him by Marcus Bochecha, Roberto Satoshi and Otavio Souza. Bochecha was also able to pass as Lo was uncharacteristically slow to switch from defending the sweep to working to prevent Bochecha’s knee fold pass.

And although Lo rarely gets submitted he did fall victim to a beautiful flying triangle courtesy of Antonio Carlos Jr. at the 2012 Pans. Nevertheless that match was an amazing demonstration of how Lo’s Jiu Jitsu can be used even against the biggest and the best competitors on the scene today.

In 2012 Lo surprised no one (except maybe Lucas Lepri) by winning the world championships at lightweight after two years at the black belt level. His match against Lepri was decided by a single advantage point following an X guard sweep attempt set up from spider guard.

Lo had actually swept Lepri with a different spider-X sweep in their 2012 Pan final, but Lepri’s game was completely on point at the Mundials, making the match more exciting than the low-score would imply. Unfortunately it came after brutally slow back-to-back Mendes brothers’ matches, so three single-advantage matches in a row was a bit tough to watch even for the most ardent Jiu Jitsu fans.

The two spider-X sweeps that Lo worked on Lepri are his primary and secondary sweep options. I wasn’t sure what his third sweep option was because he rarely needs it. So I decided to take a look at Lo’s most recent competition season to learn what sweeps, guard passes and submissions he used most regularly. Not counting coming on top when his opponent attempts a footlock, Lo’s third most-used sweep was the hook sweep from butterfly guard.

Lo’s 2011 Pan Americano match with Eduardo Lustosa provides a particularly exemplary example of this sweep. The data show overwhelmingly, however, that Lo prefers X guard sweeps set up from spider guard, including his signature half-spider X guard lumberjack sweep. Together with other X guard sweeps set up from spider guard, Lo’s use of the spider-X guard accounts for over half of his successful sweeps in competition. Lucky for us, Lo recently demonstrated a variation of his famous X guard sweep at a seminar in his native Brazil.

One important point in this sweep is the way Lo is able to push his opponent’s weight over his by bridging with his foot between his opponent’s legs, putting him into a one leg X guard while maintaining a spider guard hook. Once there, Lo is able to either grab the free ankle for a lumberjack sweep or swim his hooks into a full X guard.

As a master of the spider guard Lo has the knowledge needed to pass some of the best guards in the world. Enter Michael Langhi. Before he was a world champion, Lo’s victories over Langhi showed that he had the ability to beat former champions, including passing Langhi’s “impassable” guard. Lo uses an uncommon neural grip on his opponent’s pants when passing bullfighter-style. He often switches from the two handed grip to a one-handed toreador pass that I’m calling the “Lo drag” because I’m not very original. 42% of Lo’s passing occurs when using either the standard toreador pass or the Lo drag.

While Lo is known primarily for his toreador-style passing, he actually used variations of the kneeslide pass 57% of the time, making it his most successful pass. Lo’s ability to switch between the fast and loose bullfighter-style to the tight pressure of the kneeslide exemplifies the dichotomy of his game. Lo recently demonstrated his knee slide variation from de la Riva:

One of the keys to Lo’s passing is his use of the underhook. He is frequently able to snag the underhook in transition, putting a ton of pressure on his opponent to secure the pass. Often following the kneeslide Lo will sense his opponent coming to his knees and spin to the back. Just as likely he will pass the guard outright, like he did against even some of the best guards in his division such as Roberto Satoshi’s.

On a personal note, after watching dozens of matches I’m still excited and energized about Lo’s Jiu Jitsu. I haven’t written for a while both due to demands of family and work, but also because I’ve been bummed out about the Jiu Jitsu scene lately. I don’t want to get too into the negative things that are making it more difficult to appreciate this art and its sporting side, but between the gi fashion shows, the pushy marketing and the bullshit egos that abound in our supposedly egoless art it’s great to see competitors like Lo who are just killing everyone with a few awesome techniques that they’ve practiced tens of thousands of times without much fanfare or self-publicity.

Watching Leandro Lo makes me want to simplify my Jiu Jitsu and increase my depth of knowledge of a few key techniques. Others might be motivated to compete more because of his example, while still other people might be encouraged to be more humble when considering Lo’s roots and his low-key demeanor even in the face of so much success. Regardless of what you take from it, let’s all try to be a little more like Leandro Lo.