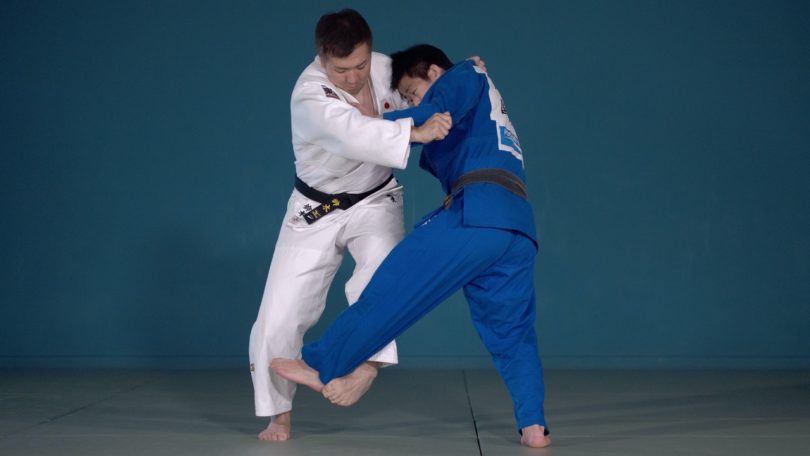 Kouchi Gari is part of the 40 original throws developed by Jigoro Kano. In addition to this, it is also currently part of the 67 official throws of the Kodokan Judo. Efficient and can be done by both novice and high-level competitors, Kouchi Gari is the type of throw that can be done with minimal movement. Kouchi Gari is an Ashi Waza or a foot technique that gives you the ability to knock off the uke’s base without relying on muscle but rather on proper timing.

How to do a Kouchi Gari?

Performing the Kouchi Gari is somewhat easy. Unlike other throws that require you twisting your entire body to finish the throw, it requires that the uke walking towards your reaping leg. One of the most popular setups for a Kouchi Gari is by first having the same side collar and same side sleeve grips.

To set up the throw, you will have to make the uke to step forward. Once the Uke steps forward, you will then reap the stepping foot’s heel using the cross side foot. If the uke decides to step with his right foot, you will also use your right foot to reap the opponent’s right side.

You also need to make sure that you are going to push forward and pull on the collar grip and even on the sleeve grip to finish the throw.

Why Teach it to White Belts?

The Kouchi Gari is a great move not only for higher belt levels but even for beginners. The throw is fairly easy to do. You don’t need to be strong to be able to get the other person off his base. In addition to this, it can open up a variety of attacks once you have mastered doing the Kouchi Gari. Compared to other throws, it is a conservative throw and could even be applied to BJJ competitors. This subtle movement can even catch guard pullers off-guard.

Combining the Kouchi Gari with Other Throws

Since it is an Ashi Waza, you can combine the Kouchi Gari with other throws. A lot of easy to execute throws can be done mostly using the feet. It is oftentimes combined with the Kosoto Gari. You get to attack one leg using both your feet. And in doing so, you can increase the chances of tripping the opponent. You can use the Kosoto Gari as your initial throw before hitting the Kouchi Gari as the opponent steps back. Or you can also use it the other way around.

Kouchi Gari can also be a prelude for big throws. Since it is a cross-step motion, it can be used as an entry towards a hip throw or towards a Seo Nage. These are just some of the options that you can use whenever you are going for a Kouchi Gari.

For example, if you are going to transition towards a Seo Nage or a hip throw, you can continue stepping right in front of the foot you were supposed to reap. Next, you can then continue turning your hip and face the other way. From here, you can either grab the hip instead of the collar to finish a hip throw, or you can clip the arm and finish a shoulder throw.

Variation for the Kouchi Gari

Depending on who you are going to ask, competitors have their own version of the Kouchi Gari. For instance, Shintaro Higashi showed in BJJ Fanatics together with Bernardo Faria how he prefers to set up the Kouchi Gari.

Shintaro Higashi’s setup for the Kouchi Gari involves dominating the cross sleeve grip. He gets to pull the sleeve he controls across his centerline. This leaves the opponent’s back open. The other hand then grabs the belt as if almost open to get the back. Shintaro Higashi mentioned that his first move for this is to a Sumi Gaeshi or a sacrifice throw that hooks on the opponent’s leg. But if he feels that his opponent reacts by pulling back to not fall for a Sumi Gaeshi, he then goes and finishes a Kouchi Gari on the opposite side that he controls.

Finer Details with the Kouchi Gari

Some small details can help make your Kouchi Gari better. For instance, it isn’t just the foot that does the job when it comes to completing the throw. Instead, you also need to have an upper body control on your opponent. You will need to play with your opponent’s weight. You can wait for the opponent to step back before hitting the Kouchi Gari. Plus, you want to push using the collar and pull using the sleeve or tricep grip. The goal is to focus on putting the foot you are trying to reap.

Novice players find it frustrating to deal with someone who has a good base. There are instances when even if you reaped the uke’s heel is that they find their balance once again. In some instances, you will be dealing with a judoka who simply doesn’t get off-balanced by your reap. In reality, this can be an opportunity to transition towards different attacks. You can switch to another side for another Kouchi Gari or you can even transition towards bigger throws from an Uchi Mata down to having a Seo Nage.

To make the Kouchi Gari effective, the Tori needs to execute it at the right time. Timing can be developed during uchikomi and drills. Uchikomi plays an important role when it comes to getting the timing right. However, more than just doing the motion, you also need to learn how to walk your opponent.

A common misconception when executing Kuochi Gari and any other Ashi Waza technique is to simply walk the uke forward and back and time it perfectly. When it comes to being an effective tori, you need to explore all the other planes. You want them to walk laterally and to walk diagonally both forward and backward. This will allow you to mix your attacks and to lessen the chances that they can still recover from your Kuochi Gari attempt.