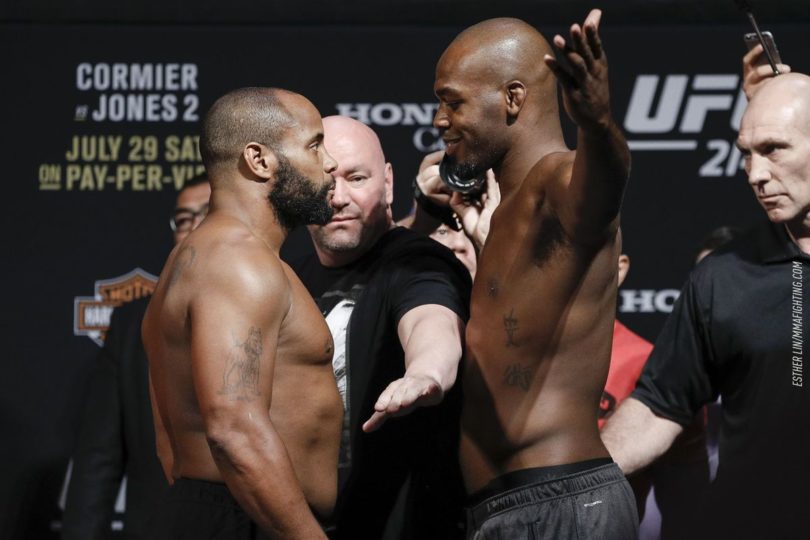 Jon “Bones” Jones did not think twice in shutting down the possibility of fighting Daniel Cormier for the third time as a heavyweight.

In an interview with Dan Hardy of BT Sports, the reigning UFC light heavyweight champion pointed out that accepting a fight with Cormier in a weight division wherein his rival will have a significant advantage in size and power wouldn’t make sense at all.

Jones, who is currently in the middle of his preparation for his upcoming title defence against Thiago Santos at UFC 239 on July 6, added that he considers Cormier a fighter who is probably on the same level as he is when it comes to every facet of mixed martial arts.

“Right now, I make light heavyweight very easily and it just wouldn’t make no sense to fight a guy who I think technically [is] on your level and to give him a size advantage, I’m not doing it. I’m not doing it. I’m sure my fans don’t like to hear me talk like that, but that’s just me being a realist and being respectful to Daniel’s abilities.”

Jones’ rare showing of appreciation for his bitter nemesis doesn’t stop there, as the undefeated light heavyweight title-holder even stressed that the only possible way he would lose inside the octagon is to take on a fighter like Cormier in the heavyweight division.

“I think my greatest chance of losing would be to a guy like Daniel Cormier, with giving him a power and strength advantage over me, it just doesn’t make sense,” Jones said.

When asked who will win in the upcoming grudge match between Cormier and Stipe Miocic for the heavyweight strap at UFC 241 on August 17, Jones picked the former to win but not before overcoming a steeper challenge from Miocic.

“I think Stipe will put up a better fight, but I do think DC will win again,” Jones said. “DC’s an extraordinary athlete. His flexibility and his speed for the way he’s built don’t really make sense. Even his endurance, the way he’s built, he’s a special athlete. I don’t think most guys would beat DC. I think the way you beat DC is just to catch him with a knockout shot, which Stipe has the power to do. The question is can he land it?”

He added that he doesn’t see the likelihood of Cormier going down to the light heavyweight division and fight him for a third and last time, saying it would take an incredible amount of courage for him to actually do it.

MMA fans know the history between the two. Jon Jones and Daniel Cormier were born to hate each other. They don’t see eye to eye. They genuinely despise each other.

That’s why seeing Jones showering Cormier with accolades appears like a trolling job from him. It looks like he’s really drawing Cormier to actually trim down in weight and cash in on another big money fight with their legacy hanging in the balance.

Remember, Cormier is the one who needs the third fight, not Jones who, despite the controversial nature of his first two victories against Cormier, undisputedly stood out as the dominant fighter.

Jones is very much aware of his rival’s competitiveness. Cormier is a prideful man. He doesn’t back down from any challenges, even though it’s putting him in a disadvantage. A textbook ‘cerebral assassin’ as Jones is, he’s actually using these interviews as tools to lure Cormier into a trap.

It might be true that Cormier would come out as the larger and powerful guy if they ever face each other in the heavyweight. However, that doesn’t take away the fact that Jones is still the much rangier and more technically sound fighter. The reason why Cormier lost in his first two showdowns with Jones was that he couldn’t figure out how to close the gap between him and his opponent.

Every time he tried to step into striking distance, Jones always had perfect counters in the form of menacing hooks and elbow strikes. Jones’ spiderlike leg was a handful as it gave him enough separation to land quality strikes on Cormier without engaging in a wrestling tussle.

Perhaps, it’s true that Cormier has a better chance of winning as a heavyweight. Yet, Jones sure is confident that he can beat him too in that weight division. The outcome of this third fight is almost as unpredictable as betting on horses. However, the only thing we know is that Jones is a lot more confident in the light heavyweight, something that proved true in his last two conquests over Cormier.