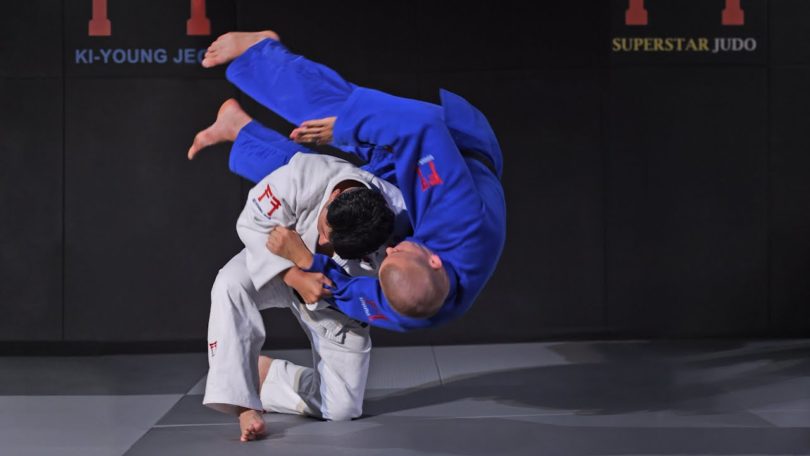 Defensively the ippon seoi nage is the first group of throws in the nage no kata, where the throw is used to defend a blow to a person’s head. It’s an incredibly effective throw for self-defence as it can be performed with or without a gi, with little variation. It is also very popular in competition.

The ippon seoi nage is a forward shoulder throw, so it’s best executed when your opponent is moving forward, or when your uke has been off balanced by a strong pull towards the attacker.

This throw is extremely effective against aggressive opponent’s who like to use forward momentum a lot and push to off balance. If the opponent takes a high collar grip or is striking at the head, this is an extremely good throw.

The ippon seoi nage can also be performed as an opportunistic move. As soon as you grip the opponent’s sleeve, you can enter into the throw. However since your lapel hand must come under the armpit of the throwing arm, a regrip by your opponent can make this throw slightly more difficult as they are able to disrupt the movement. However, it is possible to throw them even with the regrip, it just requires more force.

How To Perform The Ippon Seoi Nage

To perform the ippon seoi nage, start the throw with a strong pull on the controlling arm of your opponent. This off-balance will pull your opponent closer to you. Keep the arm firmly gripped to prevent any retreat.

This sleeve pull will raise your opponent’s arm, opening up space between the elbow and the bicep. Step in with your far foot and pivot into the body so your hips are connected.

With your free arm, overwrap the bicep on their controlled arm at the bicep and continue to pivot so you back is facing your opponent.

Once you are there, bend your knees, so you hips are lower than your opponent’s and then drive your hips back into your opponent while pulling them over your shoulder.

As you bend forward and drive with your legs rotate your shoulder and throw your opponent over your shoulder.