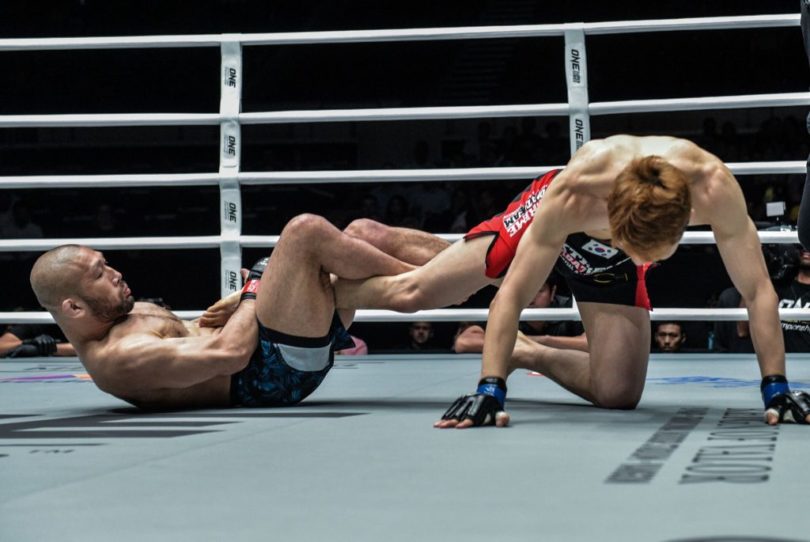 Thanks to a certain team called the Danaher Death Squad, leg locks are as popular as they’ve ever been, I mean why shouldn’t you “ignore 50% of the body”?

While the use of leglocks has increased, overall their entries remain mostly unchanged, from Danaher’s dual leg control to Craig Jones‘ Z guard, entries are relatively similar and most of them are unflashy and simple enough to perform.

However, throughout the grappling ages, there has been one entry which is held near and dear to leglockers of the world. The Imanari Roll.

Masakazu Imanari is a Japanese, Mixed Martial Artist and former professional wrestler, who was one of the first people to use this rolling leg lock entry effectively in competition, in both MMA and grappling.

Imanari was given the nickname “Ashikan Judan” which translates to “The Great Master of Leg Submissions”, so you might say he’s pretty good at them.

Imanari wasn’t known for his striking ability, but his ability to use strikes as bait to setup his rolling leglocks became legendary.

Imanari described his preference for leg locks in an interview, “because it hurts the opponent”.

What is the Imanari Roll?

The Imanari Roll is a rolling leg lock setup used to quickly cover distance and entangle legs into a position where a person can finish their opponent with a heel hook or other footlock.

The roll can be classed as a takedown because the leg entanglement and reaping position causes an off-balance putting the opponent on the mat.

Once downed, the Imanari roll can finish in two positions, the Ashi Garami or the 50/50 position depending on the variation of the roll.

Since it uses back in Imanari’s PRIDE days the move has been adopted by the general grappling community and it has had a revival thanks to the latest leg lock trend.

These days competitors such as Garry Tonon and Marvin Castelle are using the entry to great effect. The move has also been seen in recent UFC events by BJJ black belt Ryan Hall, who used to move incredibly effectively to finish his opponents in the Ultimate Fighter.

How to Perform an Imanari Roll

While it may look flashy, the mechanics of the Imanari Roll are surprisingly simple once you grasp it. Essentially it’s a combination of a Granby roll and a backwards roll.

Ideally, you will need to know how to Granby roll and invert before you start to drill this technique, so if you don’t know how to, start working on that flexibility.

The Imanari roll can be performed from a sitting position and standing position, for simplicity we’ll start with the sitting variation.

When your opponent is standing and you’re sitting, you’re going to take a grip on the inside of his ankle with the same-side arm, with your palm facing outwards.

From there you will use the angle of the arm to drop down on to your shoulder into an inverted position.

While inverted, raise your hips to the sky and with your outside leg, you’re going to want to connect the top of your thigh to the back of his thigh. Your outside leg should now be behind your opponent’s leg and your foot should be tight to the inside of the opposite thigh.

Your inside leg should fall into place with the inside of the thigh gripping onto the front of your opponent’s thigh.

As you complete the inversion to come back onto your bum, the leg entanglement will cause your opponent to sit on the floor.

If everything is done correctly you should be in the outside Ashi Garami position, ready to attack the inside heel hook.

During Season 22 of the UFC’s Ultimate Fighter, BJJ black belt Ryan Hall would go on to compete against other seasoned MMA fighters to win a six-figure UFC contract.

During his first match, Ryan would use his variation of the roll, to end up in the 50/50 position to finish the outside heel hook. In fact he did this twice while in the house.

Ryan Hall would also go on to dismantle BJ Penn with the position.

The Ryan Hall variation of the Imanari roll uses over-rotation to bring the outside leg all the way back around the leg to finish in the 50/50 position. This was likely developed due to the IBJJF rules on banning knee reaping.

Depending on where you finish in the Imanari Roll, depends on how you finish the foot lock. From a traditional Imanari roll, you will end up in the outside Ashi Garami position, meaning that the inside heel hook is available.

The outside Ashi position is perfect for setting up kneebars also, especially if you over-rotate. As you end up back on the floor, it’s common for your opponent to start their defence. One of the quickest and easiest defences for the heel hook is to hide the heel.

If your opponent does then, you can continue the rotation around the leg to the kneebar position, again is they defend that, toe holds and heel hook options are once again available.