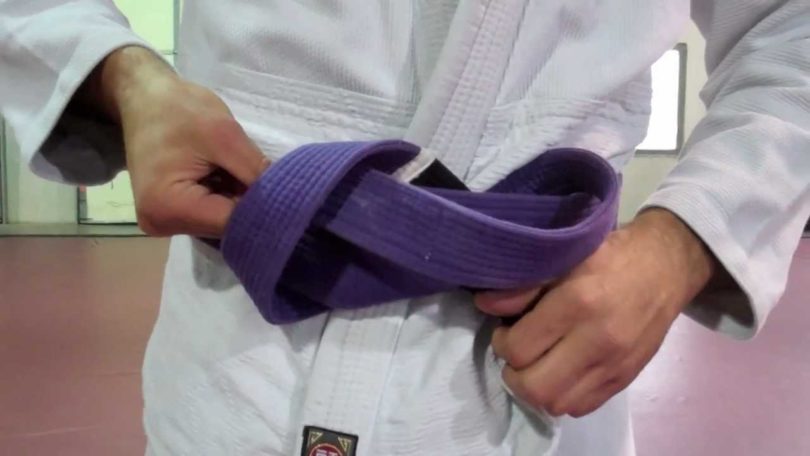 The belt is considered sacred in Brazilian Jiu Jitsu. What makes BJJ different from other forms of martial arts is the fact that you will need to spend years before getting your black belt. Every belt is considered as an accomplishment. It’s common to see practitioners spend more than 10 years before receiving their black belt. BJJ practitioners make a big deal about belts because it represents not only your rank but it also symbolizes your knowledge about the gentle art.

For these reasons, it’s a must for any BJJ practitioner to know how to tie their belt. However, this is quite a challenge, especially for novice practitioners. It’s common to see pictures of white belts attending their first day with their oversized gi and weirdly tied belt.

Why Tie Your Belt?

Apart from being a sign of respect, tying your belt has practical applications in jiu-jitsu. It can be used to keep your lapels close to your body. With the popularity of worm guard attacks and galaxy guard, your belt is your first layer of defence against these modern sport jiujitsu techniques.

How to Tie Your BJJ Belt

The basic method of tying the belt is the one that is easiest to teach beginners. It’s easy to follow plus it gets the job done. Though it’s quick to tie your belt using this method, you also have to anticipate that it will most likely come undone after a while.

To tie your belt using the basic method, you’ll need to identify the halfway point of your belt and tie it around your waist somewhere below the belly button. Once you have both ends in front, adjust and make sure that both left and right ends have the same lengths. Fold the right strand over the left. Next, you want the right strand to go under all the layers of the belt. This keeps your belt from coming undone. Next, you can tie a knot once you’ve secured all layers.

A Tighter Method of Tying Your Belt

There is a tighter method of tying your belt. This method is popular among judokas and for BJJ practitioners who want to keep their gi for the most duration of the roll. The first step is to find the middle of the belt. You’ll have to tie it all the way around the back until both ends appear in front. Like the first method, you want both ends to be of the same length and adjust as needed.

Just as the basic first method, you want to get the right strand over the left and make the same strand go all the way under the rest of the layers. But unlike the first method, you don’t want to pull too tight. This gives you a loop where you can place the other strand. Next, you can pull both strands and tighten the belt.

The Gracie way is another good way to tie your belt. Unlike the first two options, the Gracie method gives you the chance to experience how the original founders of Brazilian jiujitsu used to tie their belt.

In this video, Relson Gracie shows how to tie it using this method. Just like any other method, you will have to close your gi with the left lapel over the right part of the kimono. Next, you want to tie your belt by finding the halfway point of the belt. The same as previous methods, you want to get both strands in front and it should have equal lengths.

The diamond method of tying your belt is a good way to secure your belt and look good in the process. It is also practical since it doesn’t take a lot of time to tie your belt. And also, because of its aesthetics, a lot of gi companies prefer to ask their models to use this method when posing in front of the camera.

You want to find the middle of the belt. In this video, the one doing the knot placed one end of the strand right where the spine is and looped the entire belt around the waist. If you don’t like this step, you can simply find the halfway point of the belt and loop it around your waist.

Next, you will have to get the right strand over the left and under all the layers. Next, the other strand goes into the loop created when you place the right strand under. However, the loop not only goes in this loop but also in between the layers of the belt. Next, you want to pull both strands to secure the gi.

Which Method Should I Use?

So which method should you be using to keep your gi together? There are a lot of things that you would like to consider when it comes to tying your belt. However, it pays dividends to know different methods of how to tie your belt.

If you are competing against someone who plays a good lapel guard, it might be a good idea to tie the belt tight. This can help buy you some time to pass and advance your position.