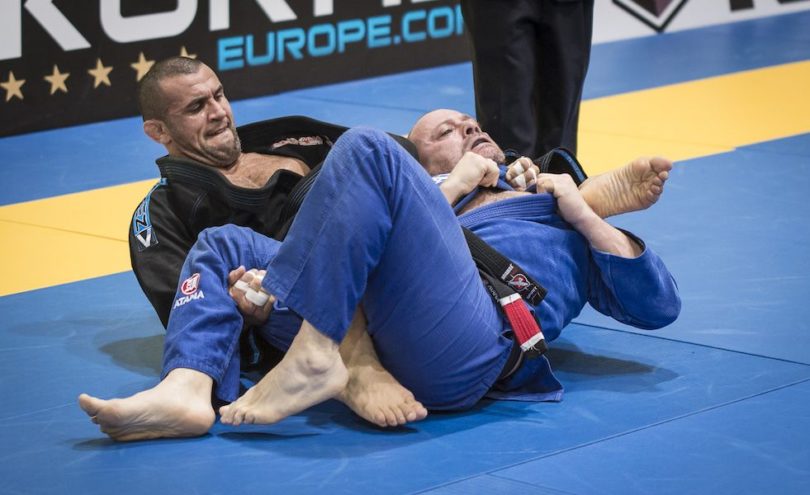 Many of us got into BJJ after watching the early UFC events, seeing Royce Gracie run through this opponents with grappling skills that the world hadn’t seen before. Anyone who’s seen Brazilian Jiu Jitsu and done their homework is familiar with the notion that the art was created for a smaller, weaker practitioner to defeat bigger, stronger opponents. Royce proved it, and most of us believed it.

If you met someone twice your size in a fight, your best bet would be BJJ. But what about when your opponent or training partner also trains Jiu Jitsu? How does this change up the game? Some World Champions like Rubens “Cobrinha” Charles or Caio Terra seem to be capable of beating bigger, stronger adversaries, but it certainly isn’t easy when they know as much Jiu Jitsu as you do.

Over the last four years I’ve been lucky enough to interview and personally train with many of the world’s absolute best lightweight BJJ world champions to determine their insights, strategies, and approaches for beating bigger and stronger opponents. In this article, I wanted to cover 5 “Go-To” principles for beating the big guys.

Use Submissions That WORK: A Lot on a Little

Many grapplers treat Jiu Jitsu like it’s exactly the same for everyone – regardless of their own body type or the situation that they find themselves in with their opponent. If you watch the best lightweight grapplers win against bigger opponents, you realize that there are certain submissions that are much more effective against bigger opponents than other submissions. Some of these “effective” attacks are chokes, some are arm attacks, some are leg attacks. The commonalities that they have is as follows:

If you had a choice to go for a head-and-arm guillotine, or a head-old guillotine on someone twice your size, which would be a more effective strategy? The fact of the matter is that the less of the bigger, stronger opponent you have to control, the better. The more you can concentrate your limited strength on a single point of weakness of the opponent, the better off you are.

This is why you’ll see a lightweight champion like Cobrinha hit a back-mount choke on a bigger opponent, but you usually won’t see him finish a Kimura on the same adversary. The choke involves Cobrinha’s entire upper body concentrated on the opponent’s neck, with the opponent left with only his neck to defend with. The kimura, on the other hand, involves controlling the opponent’s arm and shoulder using one’s arms, thus attacking a bigger, stronger part of the opponent – making that submission less likely.

Use Submissions That WORK: Ignore Gravity

Submissions are Usually NOT Dependent on Top Positioning

Another one of the most critical details to tapping out bigger, stronger opponents is using submissions that are not dependent on being on top positions. Someone who’s much stronger or larger and usually buck and roll a much lighter opponent, especially when they’re in danger of being tapped.

For instance, if you’re on top of a larger opponent and you’re aiming to finish an arm triangle or a traditional north-south choke, you’re at a huge risk of being rolled and reversed. Neither of these submissions happen to work very well from bottom, and if a giant opponent wants you on bottom, he may very well be able to make it happen.

On the other hand, if you are on top and go for a mounted guillotine, or an armbar from side control – you’ll be able to finish either of those submissions even if a big opponent turns over and ends up on top (armbars and guillotines, unlike north-south chokes, work very well from bottom positions).

When I got to take a private lesson under 8-Time BJJ World Champion Robson Moura, I asked him for his advice on beating bigger opponents (Robson has done many open weight divisions in Brazil, despite being a very small BJJ fighter himself). One principle that Robson shared with me was the importance of taking initiative with a bigger opponent – especially from bottom positions.

When the big guys “sets to tone” or makes the first move from top, it’s usually not something that can be undone. If he squashes you in bottom half guard, you usually can’t easily get out. If he compresses and nullifies your butterfly hooks, it’s usually not super easy to get back to a sweeping position.

So, in order to avoid getting passed and to have your best shot at sweep and submitting, it’s most important to not just have a guard in mind when you’re on bottom, but have a sweep or submission that you’re able to aggressively transition into without hesitation. Forcing the opponent to react will open up opportunities you might not have been able to find against a bigger, stronger opponent otherwise.

When in Doubt, Take the BACK!

I know plenty of smaller grapplers who have terrible back-attack games. This is a shame on many levels. Not only is the back mount the most reliable position to finish someone your own size or even bigger, it’s also the position that most of the world champs I’ve interviewed have identified as their “go-to” position for bigger opponents.

Think about it like this: In mount, side control, or knee-on-belly, you can get rolled. If your opponent rolls when you’re on his back, where are you now? On his back! Jeff Glover, Mario Reis, and Augusto “Tanquinho” Mendes all mentioned the back as their first choise of position against an opponent who’s significantly larger. Maybe that’s a clue? If it’s not good enough for you, study the best “giant killers” in the BJJ world (including Marcelo Garcia, Caio Terra, etc…) and see how many more submissions and points they score from the back than from positions like side control – especially when going against MUCH larger opponents.

If you’ll be battle the big guys, finding back takes from all of your best guard and top positions is one of the absolutely quickest ways to boost your submission rate and positional success against the big guys.

If you wanted to run a successful pizza business – would you want a mentor who’s run dozens of successful pizza shops, or a general business professor? Probably the guy who’s done exactly what you want to do in the pizza industry – right?

I see absolutely nothing wrong with watching great grapplers like Jacare or Roger Gracie and learning a ton from their strategies, techinques, and approaches to the game. However, if you’re aiming to be successful against bigger, stronger opponents, you have to watch the guys who do it.

There is a different between general business knowledge and knowledge of running a successful chain of pizza shops. There is also a difference between Jiu Jitsu skill and the kind of specific BJJ skills you need to beat bigger opponents.

Which BJJ champions have you watched online? Do they have a fantastic success rate against larger opponents? If your goal is to build that specific skills, you should study the techniques, strategies, and approaches of grapplers who do it best. I recommend watching Cobrinha, Caio Terra, and Marcelo Garcia.

Armed with some of these strategies to help refine your approach to tapping the big guys – you should be able to see new opportunities to become a little big more of a “Giant Killer” yourself!