This is a post i’ve been thinking about for a long time, and it’s some that really irks me when it comes to male-dominated sports, such as football, rugby and of course Brazilian Jiu-Jitsu. That topic is the taboo subject of homosexuality in sport.

The point i’m trying to make is that when you slap hands and roll that person in front of you is now your training partner and your target. Whether they be straight or gay, young or old, male or female, that person is standing in your way of victory (albeit you’re not trying to kill that person training). At the buzzer, everything changes back to normal, that person is your comrade, your training partner and your friend, no matter who they are. You share a bond that not many people, a mutual respect for each other and the only thing that matters is your love for the sport, not your taste in music, your lifestyle, job, or gender preference.

However, due to the close proximity nature of the sport, the question of “Would you roll with a homosexual?” often crops up in a number of BJJ forums, followed by a steam of posts of “no it wouldn’t bother me” to general joking homophobic comments. Unfortunately when the mainstream media can’t even take out sport seriously, our sport will never be fully accepted by the public.

Even though there is a macho nature in fight sports, there is also a level headedness that you can’t find many other places. A bit of searching on /r/bjj dug up a thread titled “I’m Gay and do BJJ. Would you roll with me?” A thankfully a regular redditor, UFC fighter Joe Lauzon, replied with this great response:

I would roll with you, because it really doesn’t bother me. I can tell when a guy is trying to actually roll, and I would know if there was something else going on there… as I am sure most women can tell when they are rolling with guys.

In regards to your questions:

1) Doesn’t matter to me if you are single or in a relationship.

2) I would have rolled with you and not cared either way. Perfectly fine with me. I have trained/rolled with guys that were gay before, and it has never bothered me.

That being said: my best advice is to keep it as you have. I don’t care/mind/whatever… but I doubt everyone at the gym will be the same way. I don’t want to tell you hide who you are, but there is a time and a place and I think to make things easiest on your self, this is one of those things to not run around announcing to the gym.

Good luck on getting your blue! 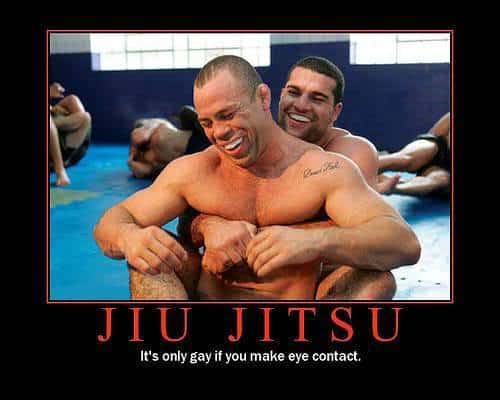 Sadly the last part of the statement really saddened me and it annoys me that peoples personal life should be hidden. People being concerned about people sparring with sexual intention is something that needs to be wiped out. Remember this is something that a lot of female practitioners struggle with at the beginning of their journey.

There are probably a lot of homosexual people rolling as your read this but their keep their life a secret like a lot of other sports people. Just remember they’re not some sort of predator out for a cheap thrill, they started this sport because they want to learn, not for any other reasons.

Jiu Jitsu for everyone.