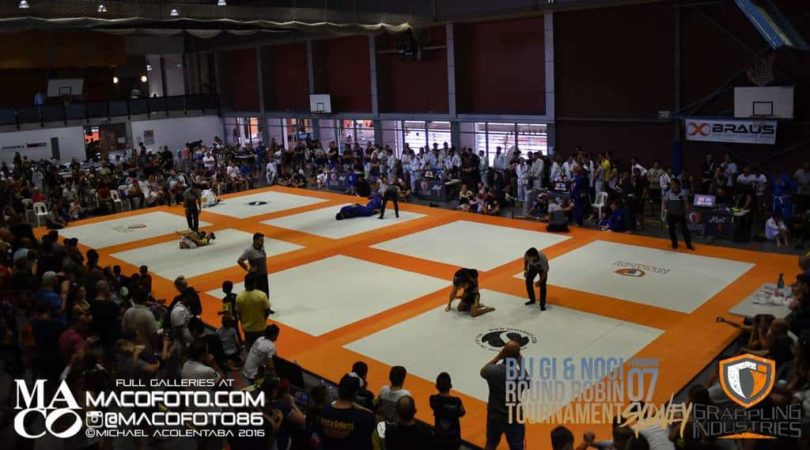 It’s the announcement you’ve been waiting to hear. Since the rise of leg locks and more and more people are getting frustrated with the IBJJF’s restrictive rule system, David Aguzzi has broken the mold with his promotion and competition, Grappling Industries.

In a short amount of time Grappling Industries have put on some massive matches, including a no time limit, sub-only match between Gordon Ryan and Keenan Cornelius. Now they are looking to shake up the restrictive rule system that has seen BJJ fall ill to world champions being made by an advantage. The following rule changes will happen from 2017 onwards…

Reaping the knee will be legalised, heel hooks, twisters, and scissor takedowns will all be legal for these belts and above.

Owner David Aguzzi has also been in talks with Eddie Bravo and will be introducing EBI format rules into their round-competitions. With the full backing of Eddie Bravo.

All Grappling Industries events will follow IBJJF points structure, which includes refereeing, rendering decisions, points scoring, advantages & penalties (IBJJF Rule book, articles 1 to 7). They have 3 exceptions to their Legal/Illegal Submissions Chart  that are in our NoGi Advanced and NoGi Absolute Divisions which are Heel Hooks, Twisters, and Knee Reaping are LEGAL in these divisions.

Since their events are using the “Round Robin” format, they will not follow the IBJJF obligations, bans, and demands (Rule book, article 8), the general competition guidelines and the competition format. In addition to articles 1 to 7, please make sure to read the following guidelines to fully understand the rules and regulations in place at Grappling Industries events.

During their designated Submission Only events, no points or advantages will be scored. Matches will result in a draw unless one competitor was significantly much more aggressive than the other in attempting to the finish the fight in which case they could be rewarded the decision by the referee.