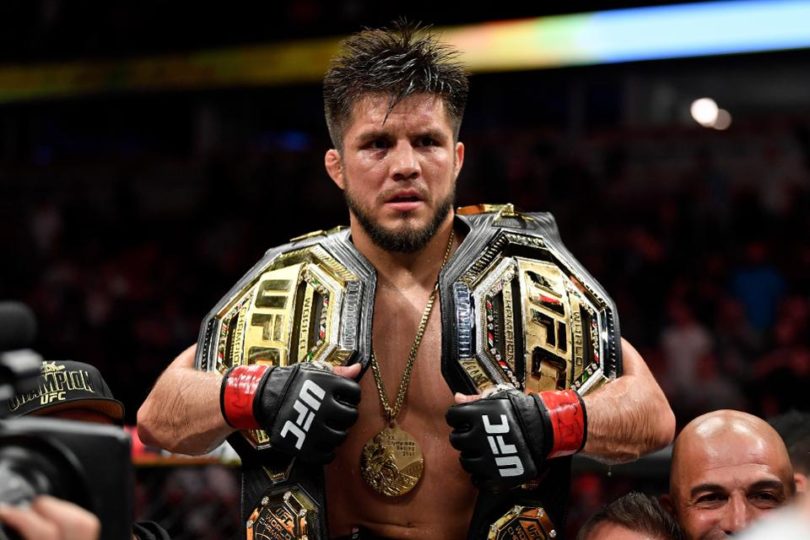 Henry Carlos Cejudo was born on February 9, 1987, in the USA. Cejudo is a mixed style martial artist who was also previously a freestyle wrestler.  He is currently fighting in the Ultimate Fighting Championship (UFC) and has also previously won the Bantamweight and Flyweight division titles. Cejudo holds the 3rd UFC pound-for-pound ranking and has also won the ‘Arizona State Golden Gloves’ for his immense skill.

Cejudo was born in Los Angeles, California. USA. His parents are from Mexico City, Mexico. He has six siblings. Both his parents were illegal immigrants which forced him to move around many cities as a child for his survival.

Henry holds a 4-time high school state championship record just like his brother Angel. His freshman and sophomore titles were won in Arizona. His hard work and dedication helped him become a professional wrestler by becoming a resident athlete in the United States Olympic training center.  He then went on to win the championships of junior and senior Colorado state high school in 2006. He was awarded the ASICS National High School Wrestler of the Year award in the same year.

This was also the year he was chosen in the Dream Team of High School All-American, by the Wrestling USA Magazine.

While still in high school, Cejudo had already had the USA Wrestling national freestyle championship under his belt. It was then that he decided to aim big and set his eyes on the Olympics.  He began his full-time training in Colorado Spring’s U.S. Olympic Training Center.

Cejudo converted his hard work and dedication into successful outings on the mat at the Pan American Games and the Pan American Championships.  He continued his stride by winning gold at the 2008 Beijing Summer Olympics. He was also the youngest Mexican-American Olympic champion in freestyle wrestling.

After the 2008 Olympics, Cejudo decided to take a long break from freestyle wrestling, and finally bade farewell to the freestyle format by announcing retirement in 2012.

Cejudo decided to join MMA in 2013. Although he wrestled at 121 pounds during his wrestling career, he fought at 135 pounds in MMA debut. He won his debut MMA fight against Michael Poe by TKO due to punches on March 2, 2013 for Arizona based World Fighting Federation (WFF).

Henry Cejudo signed in agreement with UFC on July 25, 2014. He is the third Olympic gold medallist to merge with UFC after Mark Schultz and Kevin Jackson. Henry had a fight scheduled on August 30, 2014, with Scott Jorgenson, but the fight was canceled due to medical issues on the day of weigh-ins.  After this incident the president Dana White said Cejudo to move up to bantamweight or leave the UFC.

In September 2015, things took an interesting turn as the Nevada State Athletic Commission suspended fellow wrestler Nick Diaz for a failed drug test.  Cejudo then refused to fight in Nevada in response to the decision of the commission. Despite the lack of change in NSAC procedure, Cejudo ended his boycott and agreed to fight against UFC Flyweight champion Demetrious Johnson on April 23, 2016, at UFC 197 for the flyweight title. He went on to lose the match in the first round.

Cejudo was competing with Joseph Benavidez for the position of coaching on The Ultimate Fighter 24 on December 3, 2016. Henry lost the back and forth fights via split decision losing the coaching opportunity.

Cejudo was then to face Sergio Pettis on the 13th of May in 2017. However, on May 10, Cejudo underwent a hand surgery which led to cancellation of the fight.

Cejudo then fought Wilson Reis on the 9th of September, 2017. He beat Reis in the second round via a TKO. The win turned out to be his one of the most memorable fights as Cejudo won his first-ever ‘Performance of the Night’ bonus award.

Cejudo after challenging for two years for the Flyweight title faced Demetrious Johnson in a rematch for UFC Flyweight Championship title at UFC 227 in August 2018. Cejudo went on to win the back-and-forth fight via split decision to become the UFC’s second Flyweight champion and first Olympic gold medalist to get the UFC gold. After this fight, he earned the title of ‘Fight of the Night’ award.

Cejudo had signed a six-fight contract with the UFC.

The first fight of defending his Flyweight Championship with UFC Bantamweight Champion T.J. Dillashaw at UFC Fight Night 143 was on January 19, 2019. It was the first title fight to show the new UFC legacy belt to the people. Cejudo won the fight via TKO in just 32 seconds into the first round retaining his title again. The win earned him a second award of ‘Performance of the Night’ bonus award. In April 2019, USADA announced that Dillashaw was tested positive for EPO in pre and post-fight screening for the same title defending fight. He was suspended for 2 years.

Cejudo finally faced Marlon Moraes on the 8th of June, 2019, for the UFC Bantamweight Championship. He won the fight in the third round and became the bantamweight champion.

This win was a record-breaking win as he was the fourth fighter to hold championships simultaneously in two weight divisions in UFC. The win not only made him the bantamweight champion but also gave him a third ‘Performance of the Night’ award.

Henry Cejudo is now inactive until 2020 due to a shoulder injury.