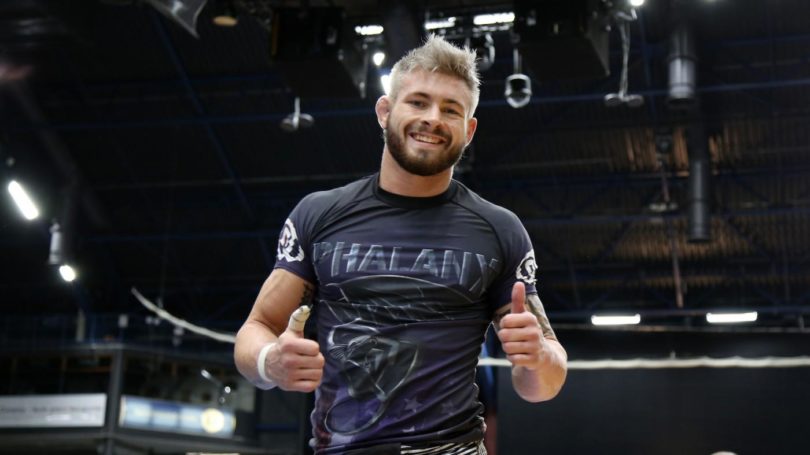 Born on 8th July 1995, in Monroe New Jersey, United States, Gordon Ryan is one of Jiu-Jitsu’s biggest names right now. At the age of 15, Gordon was introduced to BJJ by Miguel Benitez, and soon after he would train under the legendary former UFC fighter Tom DeBlass at his Ocean County Brazilian Jiu-Jitsu academy.

Just after a few months of training, Gordon was intoduced to Garry Tonon. At the time, Gordon was a four striped white belt and Garry had just received his brown belt as was already considered as one of the sports rising talents, and one of DeBlass’ most accomplished and successful students to date. Over time, the two became close friends and Gordon would regularly attend his classes at his Brunswick BJJ academy. Ryan would start to develop his successful submission only game under the watchful eye of Tonon.

With the idea of becoming full time in the sport becoming more and more appealing, Gordon would travel to New York with Garry to train with another one of his mentors, John Danaher, head coach of the infamous Renzo Gracie Academy. Now training under Danaher, Gordon would start to develop the Ashi Garami game that made Danaher’s previous students so successful.

After a 6 month tear up at brown belt and winning the IBJJF NoGi World Championships, Gordon was awarded his Black Belt by Garry Tonon on February 2016, under the watchful eye of their head instructors Tom DeBlass, John Danaher and Ricardo Almeida.

After receiving his Black Belt in February, Gordon Ryan would go on to compete at the 6th instalment of the Eddie Bravo Invitational, alongside his team mate Garry Tonon, who was already a 2 time champion. Gordon Ryan’s first opponent was American Black Belt Jacen Flynn, who was dispatched by Gordon with a Rear Naked Choke.

Gordon would then go through to the Semi finals after beating Brazilian Marcello Salazar with a Knee Bar, where he would meet Caio Terra black belt Yuri Simoes. Ryan would be avenging his friend’s loss to Yuri in the previous round by finishing with a Rear Naked Choke in the overtime round to progress to the final.

Gordon would then go on to win the final with a Rear Naked Choke in overtime against a tough Russian opponent Rustam Chsiev.

Winning EBI 6 was a huge platform for Ryan, who would go on to win the middleweight title at EBI 8 and retain his absolute title at EBI 14 in a tough match against Australian Grappler Craig Jones.

In September 2017 Gordon Ryan would be invited to compete at the Prestigious ADCC event held in Finland. After a massive physical transformation, he would be competing in the 88kg division. Ryan would have some tough opponents if he wanted to be crowned king. Ryan would go on to win the 88kg division by submitting every single one of his opponents and winning the final with an arm-in guillotine against American grappler Keenan Cornelius.

Gordon Ryan would then look to solidify his reign in the Absolutes, where he would face Roberto ‘Cyborg’ Abreu in the first round, finishing him with a heel hook. In the Absolute quarter finals Ryan would face Craig Jones, who had already made a name for himself at this year’s ADCC. Jones would succumb to an Arm Triangle from Gordon Ryan, and Gordon would progress to the semis, where he submitted Mahamed Aly with a heel hook.

In the finals of the Absolute division, Gordon would go up against the ferocious Felipe Pena, the 99kg Silver Medalist, who had previously submitted Marcus ‘Buchecha’ Almeida with a Rear Naked Choke.

Sadly Pena got the best of Ryan in the final and he would have the settle for 2nd place in the absolutes. Not bad for a first outing, where he submitted 5 opponents to become number 5 on the all-time highest ADCC submission list.

The Future For The King

The future for the king is the kimono, Gordon Ryan has already stated that he will be focusing his next efforts on obtaining IBJJF World Championship gold. We can only say “It’s going to be a bad day for the haters”.