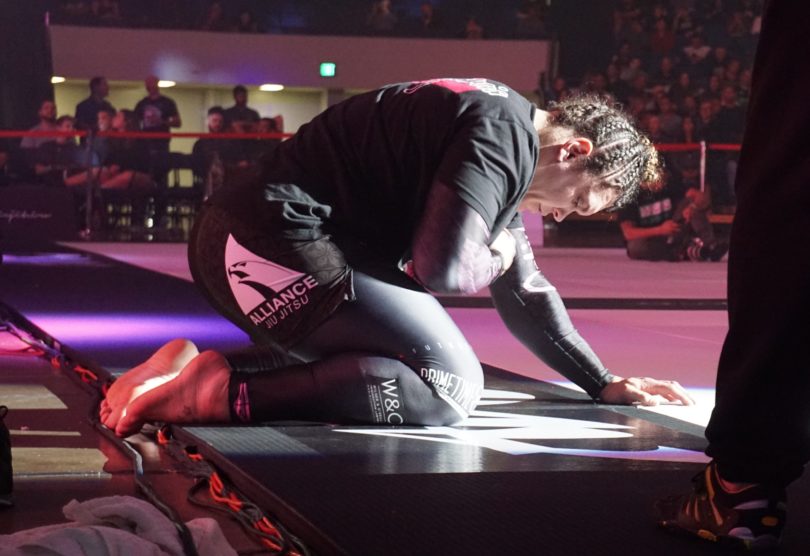 Gabi Garcia has had her fair share of critics and perhaps rightly so, however her achievements speak for themselves after she equalled Marcelo Garcia‘s record of 4 ADCC golds last weekend.

On Sunday 28th September the Alliance black belt achieved a feat very few fighters can claim, winning 4 ADCC golds. After defeating Carina Santi in the +60kg division Garcia gave an emotional interview with Kenny Florian, talking about her critics, but once the dust settled she released a statement on her social media page.

Getting to the top is easy, and keeping it is difficult.
It’s been 10 years of Adcc and I’ve stayed on top.
I became the only 4x woman to win the biggest tournament in the world, I reached the titles of the idol Marcelo Garcia.
Yesterday I won much more than my opponents, I defeated my pains, I defeated those who didn’t believe in my victory.
I defeated those who said they would beat me on the Internet without being able to answer because the biggest answer is this gold!
To the internet opponents I can only tell you being on top is not got everyone, the internet does not make a champion!
Talking about me is easy, everyone wants to have what I have, but nobody wants to pay the price I pay!
Congratulations @carinasantibjj I knew the final would be with you and I talked about it all the time.
Do not make excuses for my victory, I deserve it.
Thank you @cobrinhacharles I learned too much from you, true samurai!
thank you @fabiogurgel always with what I need to hear.
thank you @adcc2019 @mojassim80 @sethdanielsf2w
The story continues in 2021.
You can cry that it is free.

The main source of criticism about Garcia is nothing that she can actually control and it is in the hands of the ADCC, the two-weight female division.

Currently, the ADCC has two weight divisions for women Under 60kg and over 60kg, whereas the mens division has 5 divisions in total, as well as an absolute.

Even as a world-class black belt Garcia still has 30+kg advantage over some competitors, so it’s unsurprisingly that she’s been able to defeat her opponents at ADCC.

As Jiu-Jitsu grows the female talent pool has also grown, and it would be sensible to look at more weight divisions for ADCC.