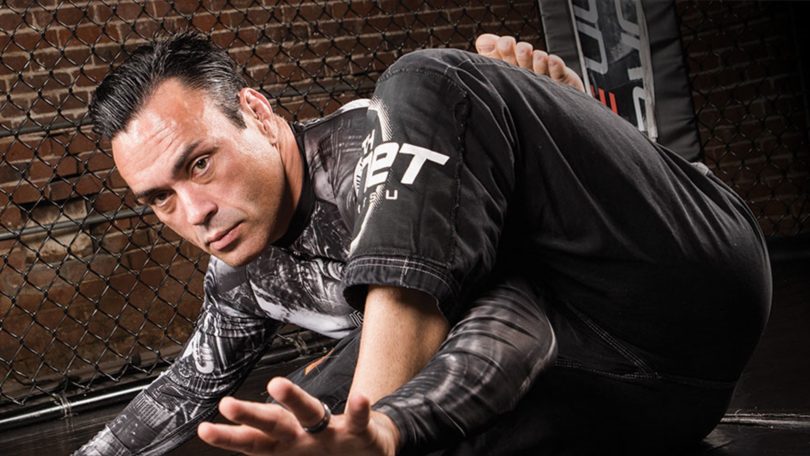 Eddie Bravo or Edgar A. Cano was born on May 15, 1970 in Santa Ana, California, USA. Although Bravo has been involved in many different things, he’s more commonly known for being a martial artist and a stand-up comedian. In 2003, he was awarded a black belt in jiu-jitsu.

He began teaching and instructing jiu-jitsu in his own style and founded 10th Planet Jiu-Jitsu. He is also the founder of Eddie Bravo Invitational (EBI) grappling competition and the EBI ruleset.

Bravo is also a part of many television shows, including “The Joe Rogan Experience”, in which often appears. This show is hosted by an American comedian, actor and martial artist named Joe Rogan.

He currently resides in Sherman Oaks.

The original name of Eddie Bravo is Edgar A. Cano, however, he later decided to change his last name to Bravo.  Growing up, Bravo was very fond of music and started playing instruments and had also formed several bands aspiring to be a musician one fine day.

In 1991, when Bravo was 21, he moved to Hollywood, California looking forward to pursuing his career in the field of music. He started a band named Blackened Kill Symphony.

He wanted to look smart and cool and not like a slob while performing in front of his audience so he decided to join a gym where he went twice a day. He later decided to join Karate classes. In 1994, he saw Royce Gracie win an Ultimate Fighting Championship (UFC) event which changed his mind for good and he dreamt of becoming an MMA fighter.

His instructor and guide was Jean Jacques Machado, who is one of the world’s most decorated BJJ specialists. He also joined Jeet Kune Do academy from 1996-1998.

He got married to his old-time girlfriend Lux Kassidy in March 2012. She is also a part of the entertainment industry. They have a son together named Draco Lee.

Bravo decided to stop attending other martial arts schools and academy in 1998 so he could focus solely on Brazilian Jiu-jitsu. He had achieved a blue belt already and started developing a new submission style called ‘Twister’, a specific spinal lock submission hold. In 1999, he achieved a purple belt and his signature guard was the rubber guard.

Bravo also participated in 145 lbs / 66 Kg division of Abu Dhabi Combat Club [ADCC] in 2003. He was awarded a brown belt in BJJ, after he won the North American trials.

During these matches, Bravo was able to defeat Gustavo Dantas in the elimination round by using a rear-naked choke technique.

He fought well throughout the rounds always leading with the score and ended the fight with his signature mark; the rubber guard eventually winning via triangle chokes. However, he lost to the tournament champion Leo Vieira in the semi-finals but his win against Gracie was the highlight of the tournament and a boost for Bravo’s shining career.

Upon his return from the tournament, Jean Marques Machado awarded him a black belt and he started his very first 10th Planet Jiu-jitsu school in Los Angeles.

After years of being retired from the boxing world, Bravo and Gracie decided to have another round of match which consisted of a 20 minutes fight. This match was held in Metamoris III.

Both fighters were competitive and fought and defended themselves back and forth. Bravo was able to do his half guard style, putting Gracie into a patented ‘electric chair’ manoeuvre. In the closing minutes, Bravo managed to put Gracie in a calf slicer position but Gracie hung in thereby not giving up as the time was less, and the fight had ended with a draw.

Other facts about Eddie Bravo

Eddie is also a stand-up comedian and frequently appears as a guest on a show known as The Joe Rogan Experience. Having a pretty unique boxing style, he has been given many titles by his fan, most popular being Edgy Brah and The Twister.

He is known to believe in conspiracy theories and believes in the Flat Earth Theory. He is known for inventing his own jiu-jitsu style.

Eddie Bravo being in this field for more than twenty years was very successful during his career and also after his retirement.

He is a well- known martial artist with successive wins and creation of his own school with different ideologies and principles, not the old traditional authentic way of teaching and fighting martial arts. He is now currently worth over a million dollars.

Bravo is an author of many different books where he discussed his personal life and boxing techniques. These books are: