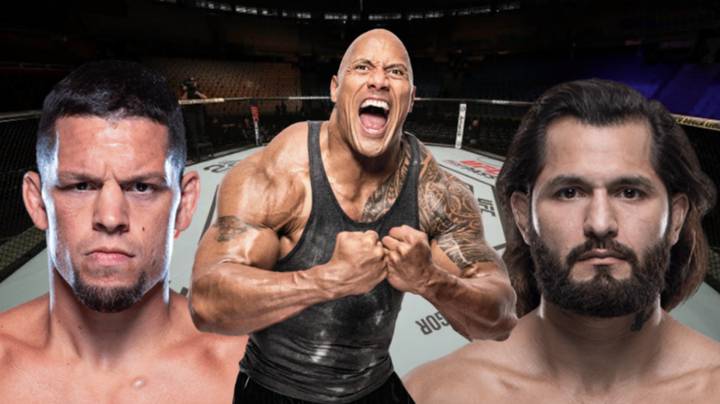 “The most electrifying man in sports entertainment” will be at the attendance of the upcoming UFC244 event to officially crown the UFC’s Baddest Motherfucker.

It comes as Dwayne Johnson announced on his Instagram that he will be at the event to lend Dana an extra hand by putting the “BMF” belt around the waist of the upcoming Nate Diaz vs Jorge Masvidal fight happening this weekend in Madison Square Garden.

Back when this fight was rumoured, it was actually Johnson who was the catalyst to getting this match booked when Masvidal, a fellow Miami native, tagged the former WWE superstar in a tweet saying he wanted “The Rock” to put the belt around his waist.

Doing all I can to make this fight. If I can and you win, I’ll put the belt around your waist at MSG – consider it done. Already shaping up to be one of the biggest and most electrifying fights in @ufc history. Can’t wait. @GamebredFighter @NateDiaz209 #respect #BMF #UFC244 ⚡️ https://t.co/nVTIeBtkgv

It was unsure whether or not Johnson would be on board due to scheduling conflicts, but that seems to have been cleared up with “The Great One” being in attendance this weekend.

What is the BMF Belt?

The BMF aka the Bad Motherfucker belt is a one-off title designed specifically for the upcoming Nate Diaz vs Jorge Masvidal contest at UFC244. The belt is a special prize for this match and will not be defended. It is expected to be unveiled this Friday at the upcoming press conference.

It is also rumoured that Dwayne Johnson will be at the presser with a special announcement regarding his future involvement in MMA.