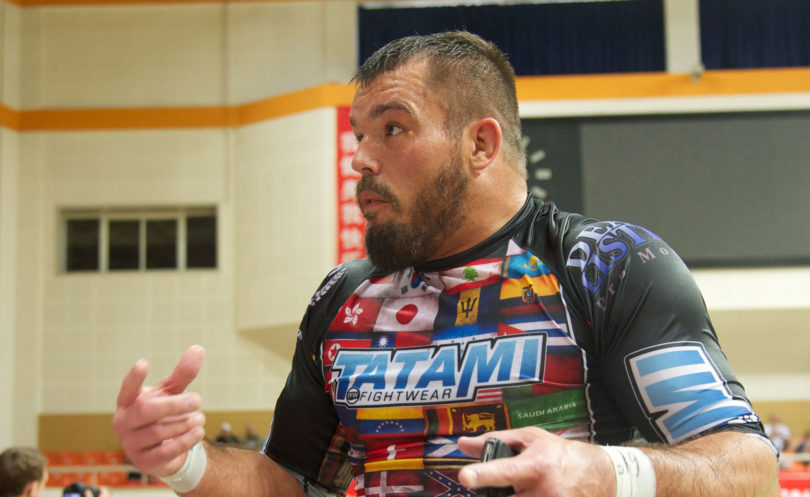 Dean Lister is a big name in both the BJJ and MMA circles. He has competed and had success in several of the world’s top grappling competitions as well as fighting in several top MMA organisations including both the UFC and Pride FC.

Arguably, Lister’s biggest achievement is winning ADCC 2003 in the open weight division, solidifying himself as the best no-gi grappler in the world for that year and cementing his place in the grappling pantheon.

Lister also has a reputation as being extremely hard to submit, even going for 16 years without being submitted in sanctioned competition, including both pure grappling and MMA.

He was born in San Diego, California in February 1976 but did not stay in California, or the USA for that matter, for very long. He and his family soon moved to South America where Lister spent the majority of his childhood, mainly in both Panama and Venezuela. In fact, he lived in Panama during 1989 USA Invasion and claimed to have lived “right in the middle of a combat zone”.

As his family were in the military, he was never in one spot for long and was therefore constantly the “new kid” in school. Being the aforementioned “new kid” as well as being both a foreigner in these countries and being relatively small for his age, Dean found himself in fights and as the victim of bullying.

At this point, Lister had yet to undertake any formal martial arts, fighting or self-defence training, doing his best to fend off attackers and bullies, etc. Lister learned about the existence of BJJ in a magazine at the age of 10, but for whatever reason would not train in the art until several years later.

Return to USA and Taking Up Wrestling

After years and years of moving around, the Lister family moved back to San Diego just before Dean started high school. At high school, Dean was still undersized and once again, the new kid. He chose to take up wrestling as an extra-curricular class as he could see the potential in regards to helping to protect himself. It was in these wrestling classes where Lister would begin to learn and hone his excellent leg locks, of which he is well known today. Jerry Matsumoto, his high school wrestling coach, also had knowledge and experience in sambo and leg-locks, which he taught to an eager, young Dean Lister.

Not long after graduation from high school, he and his wrestling team-mates visited the Fábio Santos Brazilian Jiu-Jitsu Academy in San Diego, California. Dean was hooked instantly. His previous wrestling and sambo experience allowed him to excel pretty quickly in the sport and he was competing in BJJ after only 6 months of formal BJJ training. A year later in 1997 and Fábio Santos had Dean instructing and teaching classes for him in the academy, starting off with beginner techniques and eventually teaching the advanced class too as he worked his way up through the rankings.

For 8 years, since he joined Fábio Santos’ academy, Lister would compete heavily in the gi and win plenty of medals for the Santos’ academy. He would eventually work his way up to earning a brown belt from Santos before leaving the academy to strike out on his own.

Lister always had ambitions to fight MMA, perhaps due to the tough, violent upbringing and having to use wrestling and martial arts as a necessity to protect himself rather than just for recreation. His split from the gym is a bit uncertain, but it’s widely understood that Fabio Santos did not wish for Dean to fight and use his BJJ in an MMA environment. Dean was adamant that he wanted to fight MMA and was eventually kicked out of the gym before he received his black belt.

In 2003, Dean Lister was awarded his black belt by one of his previous training partners at Santos’, Jeffrey Higgins. Allegedly, Santos was so furious at this that Higgins himself was also expelled from the gym.

The Abu Dhabi Combat Club (ADCC) is one of, if not the most prestigious No-gi grappling events in the world. Lister was invited to compete in this event three times; in 2000, 2003 and 2005. In 2000, he lost his second match again Ricardo Almeida. Three years later in 2003 and he competed again, got to the finals, but lost a match against Xande Ribeiro. Despite losing the competition, one of the fighters who had gotten through had to withdraw due to injury and Dean Lister was invited to compete in open weight division. After four matches, including three submission wins, Lister had won the entire competition.

This big upset win on a huge stage like ADCC allowed Dean Lister to pursue and thrive in MMA. He had made his debut in 2000 for the King of the Cage organisation and even eventually won their middleweight title. But with the exposure from ADCC, he was able to sign on and fight in three Pride FC events and then eventually to fight in the UFC.

In the UFC, Lister managed to get wins over fighters such as Jeremy Horn and Alessio Sakara. With this MMA success and his grappling acumen, Tito Ortiz would choose Dean Lister to serve as his grappling coach on the seventh season of The Ultimate Fighter.

Since then, Dean has continued to compete at the highest level, earning a silver medal at ACDD 2013 and competing in two Metamoris events. Also, after leaving the UFC in 2008, Lister has also fought in the Fightor organisation and the Cage Contender promotion too.

These days, Lister is more focused on teaching classes in San Diego, seminars all over the world and releasing instructional books and DVD’s rather than actively competing.