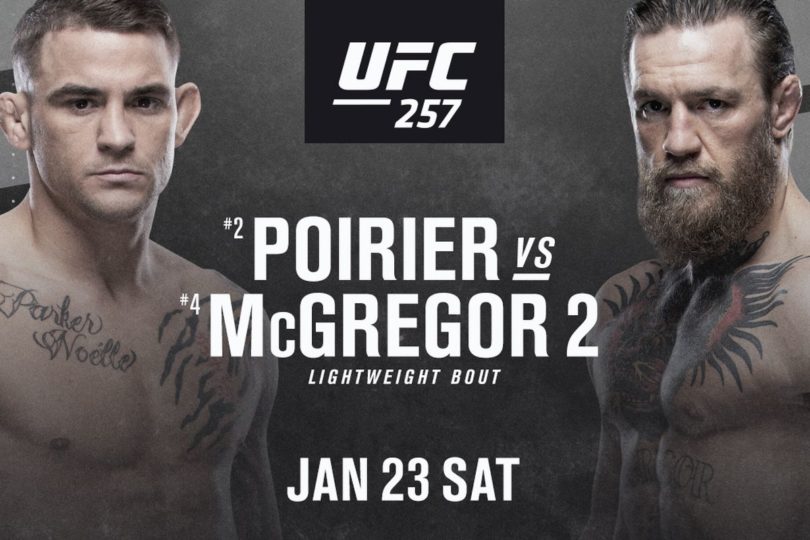 After months of apprehension, UFC finally confirms Conor McGregor and Dustin Poirier are about to set against each other on January 23, 2021. This lightweight bout between second and fourth rank holders will take place at UFC 257.

This fight has been in the limelight for quite a long now since Dana white stated it would happen a while back. Dustin Poirier and Conor McGregor both said that this bout was about to be organized at Lightweight.

UFC’s official statement was in expectation from both of the fighters to sign the fight agreement for UFC 257. Dustin Poirier was first to sign the deal, and McGregor did it as well after a while. And hence, the official announcement from UFC has arrived along with a poster of the fight.

An Exciting Match for Watching

Notorious Conor McGregor kicked off the Pay-Per-View scene of 2020, and now he looks quite fit for doing the same in 2021. He was against Cowboy Cerrone at UFC 246, and his return will be precisely ten PPVs at UFC 257 after a turbulent year.

This year, he will enter into the ring more aggressively for the lightweight belt, but on the other hand, second rank holder Dustin Poirier would await in with a formidable challenge. If the stature comes into regard that these fighters own in MMA circuit, this upcoming match will be a sell-out and have all the probabilities of going over limits. Hence, it would not be surprising if UFC 257 breaks down the all-time buyout record that UFC 229 is holding until now.

It would also be a too enticing opportunity for the sports betting enthusiasts to invest money into this prolific match. And many online bookmakers have started to offer odds on this lightweight bout. OLBG.com would be a fine place for finding out the best sports betting opportunities, as the site offers 27 active free bets for online bettors.

What Happened in the First Match between Dustin Poirier and Conor McGregor?

Numerous MMA fans have been waiting for this rematch of 2021 for around six years. But, when McGregor announced his retirement in the early stage of this year, they have given up hope.

However, it is not that big news as the possible fight between Khabib Nurmagomedov is. Still, this second edition is highly anticipated because of the heated encounter they had in their previous clash.

Conor McGregor joined UFC in 2013. During that time, Poirier was already there for two years and collected some fantastic under his name.

Conor faced Poirier as his fourth opponent after a little more than a year. In a quick season, he was against names like Max Holloway, Marcus Brimage, and Diego Brandao during that period. And, he came out for the fight, successfully gaining three consecutive winning fights.

Surrounding the fight of UFC 257, there is lots of excitement. Conor McGregor’s fans know that he was very slapdash and forthright in the earlier days of his fighting career. In the last fight, leaving up to his trash talks, he became victorious over Dustin Poirier within 105 seconds. McGregor caught Poirier with a big left hook behind the ear after repeatedly hitting him on his head.

Dustin Poirier was indeed discouraged by the outcome of the previous match. Dana White initially confirmed this rematch back in October. At that time, Poirier tweeted that he will put everything in their precise place in this rematch. He also uttered that this rematch is not about being equal. He deserves this victory, and it would be a payback to only him.

On the other hand, it was the beginning of more incredible achievements that were about to continue for the following few years. He proclaimed that he was targeting the Featherweight title after Poirier. And, keeping his words, this Irishman defeated Jose Aldo and took the title. He secured the title from Joe after three fights and 13 seconds knockout, which is the fastest in all UFC titles.

McGregor or Poirier, Who Would Be the Probable Favorite?

If the 2014 match outcome is considered, where McGregor imposes a TKO victory on Poirier, the favorite’s tag would be on him only. However, many things have changed after that match, and Poirier has reached a higher rank and became one of the top mixed martial art professional. Hence, it is going to be a tight match packed with thrill and action for all possible reasons.