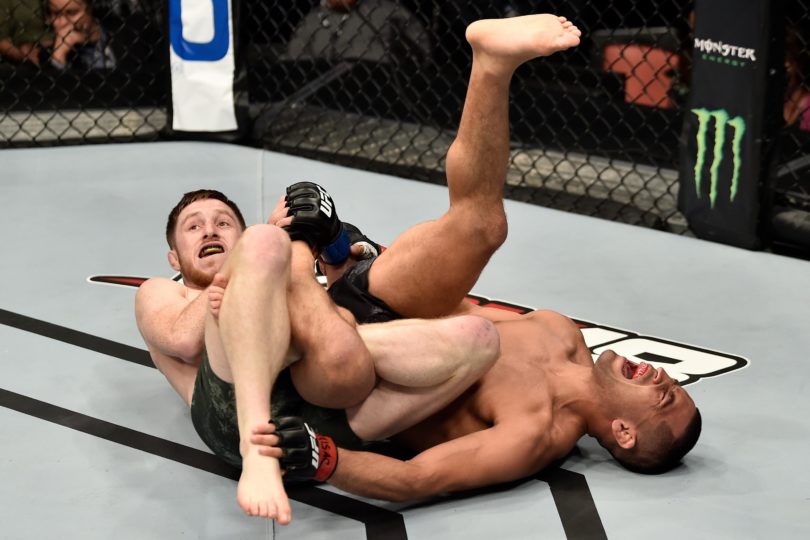 There are a lot of BJJ practitioners that are now studying leg attacks closely. Despite the resurgence of submissions catered towards the lower limbs, it is more common to see submissions such as foot locks, heel hooks, and knee bars compared to calf slices.

Calf slicers are rare whether it’s in MMA or BJJ. One of the reasons why you rarely see it is simply because a lot of organizations don’t allow the use of calf slicers to most practitioners. In most BJJ competitions, you only get to do the calf slice or calf crusher once you received your brown and black belt.

But despite the rarity of calf slicers, it’s a powerful submission. It is something that can easily damage the knees and other surrounding areas of the joint simply because it involves a lot of leverage coming from the arms or even from the hips depending on how you set up the submission.

What is a calf slicer?

The mechanics of the calf slicer involves flexion of the opponent’s leg. Just to clarify, this mechanism involves getting the heel towards the hamstring. While doing this movement, you can hit the calf slice as you place your shin right in between the popliteal or the back of the knee. In some instances, you can also use your arm as a wedge to hit the calf slice.

Why learn and train the calf crush?

So why should you learn and why should you train to do the calf slice? First, you want a submission to be fast. You want something that can hit and get the tap immediately from your training partner or your opponent during competition. Calf slicer is something that the majority of grapplers will tap instantly to.

And also, the calf slice is an attack that can come from different angles. With various points of entry and finishes, it’s a move that can be used in different scenarios during your match. It can come from half guard top position or it can be coming from a berimbolo battle.

Ways on how to finish the calf slicer

Getting the calf slice from different positions is a good way to diversify your attacks. You can get it from a single X guard, regular X guard, berimbolo, half guard top or even from a scramble. However, before we discuss these different entries, it is equally important to discuss two ways on how you can finish the calf slice.

The first option is to use your arm to flex the leg and to get the heel of your opponent to his hamstring. The difficult thing about this variation is that you are committing both hands to the instep to fold the leg of your opponent. The opponent can easily break your grip and escape or return with their own armbar.

The next option is to go for a calf slice by hugging the opponent’s hip. The instep can be trapped by your hip. This is something that can be done during crab ride situations.

The requirement is to have one hook on your opponent. But instead of fighting for seat belt grips to control the upper body, you will look the other way. As you look at your opponent’s rear, you can manipulate the foot and squeeze his legs to get the tap. This catch wrestling move requires that you pull the foot to the point where your opponent is going to be flat on his stomach. However, this move usually doesn’t work in actual sparring.

A good option from turtle once you have the bottom hook is to dive for a truck battle. You control the opposite leg without the hook, look the other way and dive for a front roll. From here, you have a variety of attacks. You can also finish via a banana split, a backtake, or finish with a calf slice.

To finish the calf slice, you will have to figure four your legs and yank the leg to put pressure on your opponent’s joint. In this scenario, it is also common that the opponent will grip fight or even attempt to get the armbar. If you feel that someone is trying to grip fight, you want to switch to another attack such as getting the opponent’s back. Mixing your attacks can help give you the calf slice.

Matrix is gaining popularity these days. It’s a move developed by Espen Mathiesen. But apart from using it to take someone’s back, it can also be a good way to go for a calf slice. The matrix is usually set up from a cross sleeve grip with your foot placed on the opponent’s hip. The cross sleeve grip prevents the opponent from playing with your foot. Now, to get the matrix position, you will have to go for a waiter grip and get your instep locked to your opponent’s hip. Next, the free leg will then hook behind the opponent’s knee.

In this scenario, you want to bend the knee before you get the free leg to hook. You can do this by transferring the waiter grip into a gable grip. Your opponent’s leg is now in front of your bicep. The leg that was stepping by the hip will then have to transfer to the opposite hip preventing the opponent from moving forward to catch you in a leg drag.

This set up can help give you a chance to figure four your legs, and transfer both hands to the hip get your chest up and you get to finish the submission.

There are a variety of opportunities wherein you can catch someone with a calf slicer. You can get creative with it. But these are just some ideas that you can explore as you play around with this powerful leg attack.