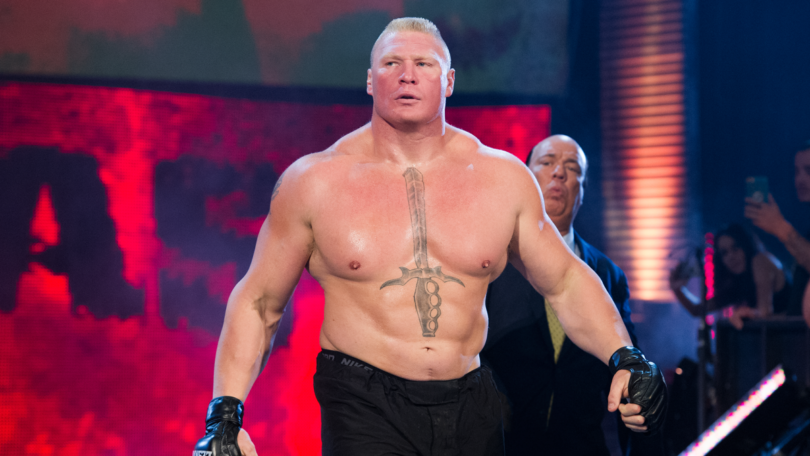 Lesnar hasn’t yet come forth with any of his future plans, but there is a lot of speculation in the air when it comes to his future. However, WWE and Lesnar failed to come to an agreement in terms of a new contract.

Brock Lesnar is currently 43 years old, and he has only competed in martial arts once in the past nine years. Also, he has only served half of his USADA suspension from the time he failed drug tests that were related to his last appearance in the Octagon.

In pro wrestling, Lesnar slowly drifted away after the WWE took away his precious title off of him at WrestleMania 36 and gave it to Drew McIntyre. Then, Brock Lesnar was not booked for the next Summer Slam, and they even took down his merchandise from their WWE online store.

But regardless of his current situation, Brock Lesnar still has a pretty impressive standing across all of the forms of combat. Whether the fight is scripted or not, Lesnar does have a face and name that can surely get fans excited. That’s why the idea of Lesnar being a free agent is quite big news.

Factoring in the current business situation and the fact that Lesnar entices competition in both the MMA and pro wrestling, it’s possible to see that he has the potential to massively disrupt any place he ends up in.

It seems like the debate of whether Brock will join MMA or pro wrestling is quite useless since there is an excellent chance that he negotiates his way between both of them. However, WWE and UFC might want to make good offers, and secure is services to block any competitors.

But either way, Brock Lesnar will definitely have a plethora of offers and opportunities to cause a shift in the balance of power. So let’s have a look at which option Lesnar might end up choosing.

Brock Lesnar only worked half time at his WWE job, which is why the fans would roar every time he came into the arena. However, he continued to receive a full-time salary from the WWE.

That is why the association is hesitating to sign Lesnar again. They don’t want to pay him an outrageous amount of money for only doing half the work. However, Lesnar has been a tough negotiator over recent years and threatened to return to the UFC because he knows that the CEO, Vince McMahon is crazy about him.

The WWE might be the best option for Brock Lesnar. If he has the hunger and will to stay in shape for another decade, then he can very easily stay in the game and keep crushing people in the scripted battles every couple of months while enjoying his wealthy life in his massive Canadian farm.

Not to mention that McMahon’s WWE has been sinking, in terms of television ratings, for a while. On the other hand, the AEW has been doing well. There is no way McMahon will let the competition have Lesnar and drop down his ratings even further.

Brock Lesnar might have faced Cormier for the heavyweight title that he didn’t really deserve after such a long layoff and the drug suspension on top of that, but UFC wasn’t able to match his price.

However, it might be good that Brock Lesnar didn’t return for that heavyweight fight. Lesnar now holds more value being the perfect opponent for the fight against Jones. The fight has been hinted for nearly a decade, and the fans would love to see it.

There was some news recently that Jones was planning on vacating his light heavyweight title to simply test the UFC’s heavyweight division waters. However, the UFC president, Dana White, prefers that the current champion Stipe Mioci defend his title in a match against the top contender, Francis Ngannou.

If that goes according to plan, then Jones might have to wait in the bullpen for some time to get a title shot while he builds up to a heavyweight frame. Alternatively, he could make a debut within the division by going against Lesnar. That latter option would definitely be a massive hit on UFC betting among the fans. Not to mention that Jones will get the right type of candidate to test and prove himself as being comfortable by playing with the big boys.

While every Lesnar fight would be a major source of attraction, and would definitely attract quite an audience, the UFC might not have many big-name matches available where Lesnar would come out on top.

However, Lesnar doesn’t really fit the AEW style, message, or presentation. The All Elite Wrestling is basically thriving as an alternative to WWE that is promoting the wrestlers whose talents might have been overlooked or dismissed. Brock Lesnar might be well suited for a wrestling brand that has a Vince McMahon face on it.

However, Lesnar could be incredibly beneficial for AEW.

If Lesnar wishes to have a fighting comeback and also more than simply a one-off payday ride, then UFC doesn’t really have many big-name fights for the beast.

However, if one big fight is all that Lesnar wishes for, then the Bellator MMA can definitely be the place for the wrestler. Lesnar would do incredibly well with Fedor Emelianenko in the ring. Both the men have faded quite enough for there to be a massive excitement from the fans in finding out who would be victorious in the end.

But beyond that, Bellator MMA might be a soft landing for Brock Lesnar, as they can’t really find many creative fights for him where he would be successful.