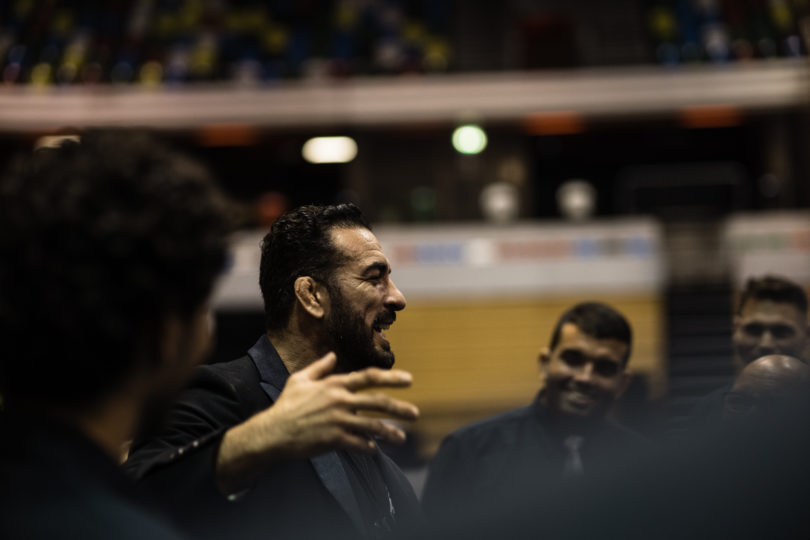 Braulio Estima is known not only for winning the IBJJF World Championship but also for his run as ADCC Open Weight and Super Fight champion. He is considered as one of the best jiu-jitsu competitors in the 2000s and has contributed to the development of the modern game. During the height of his competitive career, Braulio Estima’s game is known for its spider guard and dangerous triangle set up.

Known for his monicker Carcara, Braulio Estima won major titles in all belts. His nickname was named after a bird in his hometown. He also used to wear a gi brand called Carcara during his early years training jiujitsu.

Braulio Estima was born on June 10, 1980, in Recife, Brazil. He was introduced to martial arts at age 9. His first martial arts was judo but his first instructor died which caused Braulio Estima to temporarily stop his martial arts journey for around 6 years. Later, he started training judo and Brazilian Jiu-Jitsu under Gracie Barra.

His first Brazilian Jiu-Jitsu instructor was Charles Dos Anjos. As a white belt, Braulio Estima already showed signs of great potential as a competitor winning 5 major junior titles before getting promoted to blue belt. He then left Dos Anjos’ academy and then trained with Ze Radiola. It was under Ze Radiola’s tutelage when Braulio Estima won his Pan American Championship as a blue belt in 1999 after training for three years with his new instructor. He was then promoted to purple belt. In 2000, he was promoted to Brown Belt after placing 3rd as a Purple Belt in Pan American Championship.

Braulio Estima first stepped his foot in London when an old training partner named Alain Pozo, who was then living in London, invited Braulio during his visit to Recife during the holidays. Braulio Estima didn’t hesitate to try his luck in London, England where he trained with Carlson Gracie’s Academy. Soon after, he trained with Mauricio Gomes, Roger Gracie’s father, who was then Gracie Barra representative in the country.

In 2009, Braulio Estima faced Andre Galvao for the prestigious 89.7 ADCC title. Andre Galvao played bottom for the majority of the match. It was only during the latter part of the match when Galvao decided to push the pace on top. During his passing sequence, Braulio Estima was able to hit an inverted triangle. It was also on this day when he beat Rafael Lovato in the semis to advance to the finals of the division.

In 2010, Braulio Estima decided to pursue other fields and try MMA. He was signed under the Shine Fights MMA organization. However, in May 2010, the entire card was canceled due to headliner Mayorga vs. Thomas being canceled.

He made his MMA debut under the Titan Fighting Championship. His only MMA match was against Chris Holland on August 24, 2012, in Titan FC 24. He won this match via arm triangle.

Doping and BJJ have been a weird pair over the years. With poor testing, a lot of top athletes have been rumored to be using performance-enhancing drugs. In recent years, IBJJF was pressured by the community to partner with USADA to conduct testing of world champions.

The biggest scandal in Braulio Estima’s career was when he was caught by the USADA after the 2014 World Championship. He was caught using prohibited substance Methylhexaneamine (DMAA). Estima was then suspended for two years and was stripped of his 2014 title. He was given the maximum years suspension because Estima didn’t know where he took the substance.

Braulio Estima also mentioned that he drank a pre-workout after winning over Murilo Santana’s during the finals. Apart from his test that turned out positive for PEDs, it also didn’t help when Felipe Pena, another Gracie Barra top athlete was caught using PEDs.

Fight vs. Nick Diaz and Kron

In 2012, Braulio Estima was scheduled to have a BJJ Superfight during the 2012 World Jiu Jitsu Expo in Long Beach, California. Unfortunately, Nick Diaz didn’t show up in the venue claiming that Braulio Estima didn’t make weight. However, witnesses were claiming that Braulio made weight. Since the no-show, Braulio even said that he is willing to fight Nick Diaz in MMA.

Braulio Estima has been a training partner for George St-Pierre. After UFC 158, Braulio went backstage to shake Diaz’s hand. Unfortunately, Nick Diaz shoved him and called him names. Kron Gracie was also involved in this incident. Braulio Estima’s brother, Victor Estima has a history with Kron Gracie.

Braulio mentioned in the MMA Hour Broadcast that “Basically, you know, after the fight when I saw everyone hugging and everything, I thought as a sportsman I would show my respect”. He then added that “I stepped forward to shake hands and he pushed me to the side…He pushed me away. What can I do, you know?” He said that Dana White thanked him “for not pushing back”.