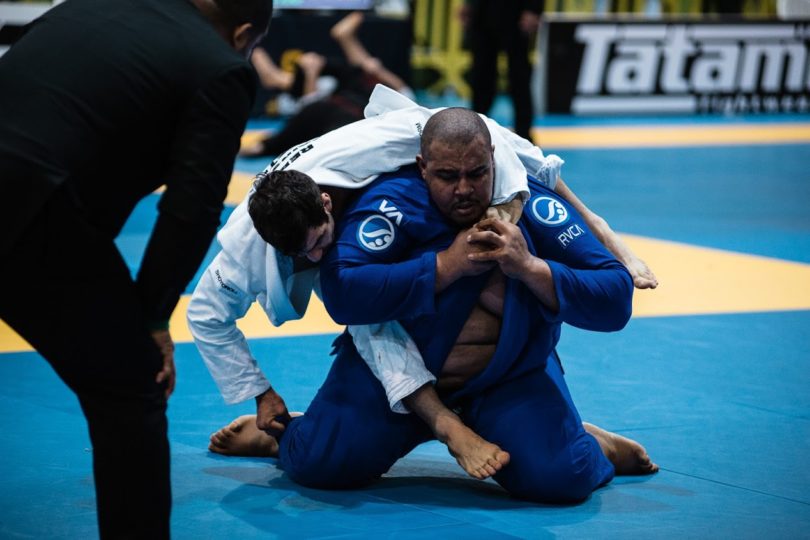 One of the more common back attacks is the bow and arrow choke. It is a common move wherein you use the lapel and your wrist to choke your opponent. This move can be integrated with several back attacks and could open up opportunities such as armbars and other submissions.

How to execute a proper bow and arrow choke?

Landing on the choking side

To properly execute a bow and arrow choke, you can start by having seat belt grips on your opponent. The basic execution of most back chokes is when the choking side (the hand on the shoulder) is placed on the mat. You want your choking hand to grip high on the collar. The thumb and the opponent’s clavicle should be the marker whenever you are doing any back chokes using the lapel.

The thumb should be touching the clavicle plus your elbow should be tight on your hips. Once you have the proper positioning of your choking hand, you want to be perpendicular to your opponent. The leg on the side of the non-choking hand will move across the opponent’s hip. To finish the bow and arrow, you want to grab the leg and to torque the opponent.

Landing on the non-choking side

It happens more common that the opponent will try to escape if you caught his or her back. And it is common that you end up with seat belt grip but on your non-choking side. If this happens, you can still finish the bow and arrow choke.

However, instead of finishing with your choking hand on the mat, you are going to finish it with the hand that is off the mat. The same as the conventional means of finishing the bow and arrow choke, you will have the leg on the side of the non-choking side to go perpendicular on the opponent’s body. The reason why this isn’t ideal is the fact that there is space for the opponent to unweave your choking hand over his head.

To stop the opponent from doing this, it is a good option to have the leg near the head to go over the shoulder of your opponent when finishing the bow and arrow choke. This makes it harder for the opponent to unweave your choking hand. You can then grab the pant and finish from there by torquing the leg and the neck of your opponent.

Common Counters and How to Deal With Them

The most common counter when doing bow and arrow choke is when your opponent grabs both hands preventing you from yanking the neck. If you faced this kind of problem, what you can do is to step your leg over the shoulder. This will overpower the arm from stopping your hands.

You also have other opponents who are going to successfully defend your choking hand to the point where you don’t have the collar grip to even get the choke started. In this scenario, you can always just switch sides. You can get the non-choking hand and turn it into a choking hand by going for the top side. And the arm that the opponent is defending can become the non-choking side. Mixing things up can increase the likelihood that you can finish the choke from the back.

Next, you also have others who break the pant grip and barrel roll to escape the bow and arrow choke. This escape rarely happens simply because it takes great timing to be able to spin out of the choke once there is no grip on the pant. A common adjustment that you can make is to either hook the back of the knee or simply use a c-grip and grab the heel of your opponent when finishing the bow and arrow choke.

Lastly, the most common and most effective counter to the bow and arrow choke is when the opponent grabs your choking hand with both hands and unweaves it over their head. It is also common that they use their foot planted on the mat to get away from the choke. If you don’t do anything, this could lead to the person going on top. If you feel that you no longer have the bow and arrow choke, you can always just opt for the armbar. You can attack the arm that is nearest to your body.

Combining Different Back Attacks to Bow and Arrow Choke

Roger Gracie mentioned that he doesn’t like to use the bow and arrow choke whenever he is going for a back attack simply because the pant grip is easier to break than going for a zipper choke with both grips on the lapel.

When it comes to doing bow and arrow choke, you have to realize that there will be people who will not just concede the position. It is a good idea if you could keep them guessing. Following Roger Gracie’s advice, you can combine different attacks especially when you don’t trust your grip on the leg. You can settle for a zipper choke. In some instances, you can even go for a chicken wing choke where the non-choking hand weaves to a half nelson to add pressure on the neck.

Don’t also forget to use nogi chokes such as a rear-naked choke can be used in this scenario. If the opponent starts to defend your choking hand and you no longer have the collar, you can make your non-choking hand and wrap it around the neck. This will give you the chance to finish from the back with different variations of rear-naked choke. At times, you can even just hold the back shoulder of your opponent and get the tap. However, since you are doing it with the gi, you also have to anticipate that the collar could get in the way.