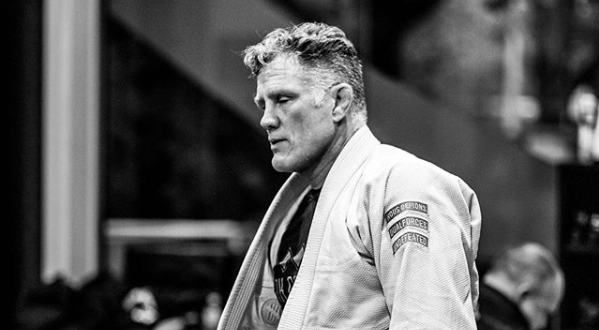 These days, you see a lot of non-Brazilian BJJ black belts all over the world. Big tournaments are conducted for days to accommodate practitioners. However, during the 90s and even during the 2000s, there weren’t a lot of non-Brazilian practitioners who reached the ranked of black belt. It was only after UFC 1 when BJJ landed in the US. And compared to what it is today, the 90s and 2000s were days of training in someone else’s garage.

The Jiu Jitsu Dirty Dozen is a name coined for the pioneers of BJJ outside Brazil. Because of the absence of the internet and social media during this time, there were a lot of corrections made on who makes it as part of the Dirty Dozen.

The very first non-Brazilian to reach the rank of black belt is Craig Kukuk. A Royler Gracie black belt, he is a prominent figure in America’s East Coast scene. He opened an academy in New Jersey. He received his black belt around 1991 and 1992 according to Steve Maxwell who was present during the ceremony.

The next three black belts were promoted by Joe Moreira in 1996. This includes Marc Baquerizo, James Boran, and Rick Lucero.

James Boran was a linebacker for Columbia University before becoming a BJJ black belt. He also signed with the New York Jets in 1979. For his martial arts background, he also holds a taekwondo black belt when he joined the Gracie Family gym in Torrance. James Boran also competed and won the 2006 Pan American Championship in the senior division.

Though not much is known regarding Marc Baquerizo, he is known for having a background in other martial arts namely judo and hapkido.

Rick Lucero is known for having experience in wrestling. Though not much is known about Rick Lucero, he is still actively coaching in California.

Bob Bass is a Rigan Machado black belt promoted between early to mid of 1996. He is considered as one of the best grapplers during the mid-1990s. As a brown belt, he was able to win the 1995 Pan American Championship during its inaugural event. It was a historic accomplishment not only because it was the first Pan American Championship but because he was able to beat Marcio Feitosa of Gracie Barra in the process. He is also the founder of South Bay Jiu Jitsu Academy.

Rick Williams along with Chris Hauter and David Meyer were all promoted on the same day and grade by Rigan Machado. They were promoted in December 1996. Among notable practitioners in attendance included Renato Magno and Fernando Vasconcelos.

Rick Williams was a former wrestler who won the Pan American Championship as a brown belt in 1996.

From the 1990s to 2000s, Chris Hauter competed before deciding to build his gym, Combat Base Academy. He is known for being the one who started the jiu jitsu gauntlet. In the last years, Chris Hauter enjoyed mainstream popularity being the referee for Metamoris and doing BJJ Globetrotters camps.

David Meyer used to practice traditional jiujitsu before transitioning towards BJJ. He became a competitor and even bagging third place in the World Championship’s adults absolute division in 1998. In recent years, he still competes as a Masters 3 competitor and won the Pan American title in 2011.

The last in our list is John Will. He was promoted somewhere around 1997. He is considered as a pioneer in Australia and was able to build talented MMA fighters including George Sotiropoulos who eventually signed up in UFC. John Will is also a practitioner of different martial arts including silat and Taekwondo. He is the editor and founder of Blitz, which is a martial arts magazine in the 1980s.

One of the things that you will notice is that the lists are different depending on the website that you’ll check. Rick Minter was initially included in the list. However, corrections were made during BJJ Heroes interview with Rigan Machado and he mentioned that Rick Minter was promoted a few months after John Will.

Apart from Rick Minter, some websites would also include names such as Chris Saunders, Roy Harris in their Dirty Dozen list. Unfortunately, due to the lack of proper documentation and the absence of the internet during that time, things get a bit confusing for websites that come up with these lists.

However, the Dirty Dozen serves as a reminder to the humble beginnings of the sport how it was able to transition from Brazil to becoming a widely practised martial art in different parts of the globe. The Dirty Doze shows us how far jiujitsu has gone from the 1990s to the present.