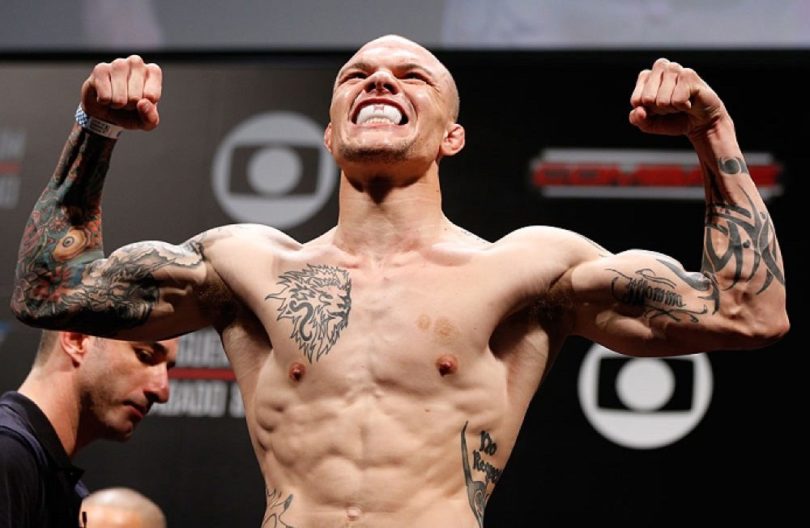 Anthony “Lionheart” Smith is fresh off a five-round drubbing at the hands of Jon Jones, arguably the best pound-for-pound fighter in MMA history. But he’s not being served any cupcakes in his next bout, facing three-time light heavyweight title challenger Alexander Gustafsson at UFC Fight Night 153.

Smith, a BJJ black belt, will lineup across from Gustafsson – a purple belt, himself – at the Ericsson Globe in Gustafsson’s native Sweden on June 1st.

Like Smith, Gustafsson’s last fight was a decisive loss to Jones (Dec. 2018), but whereas Smith lasted the full five rounds, Gustafsson was TKOed in the third.

Smith will be at a slight disadvantage in terms of height (6’3 vs 6’5) and reach (76” vs 79”), but he undoubtedly has the slicker ground game. He’s finished 11 of his 31 wins by submission, including a rear-naked choke of a gassed Volkan Oezdemir last October…

Oezdemir vs Smith lived up to the hype, and our @SugaRashadEvans and @DominickCruz break it all down! pic.twitter.com/6PEUI62Wv4

Gustafsson has three submission wins among his 18 victories, but they are all basic rear-naked chokes and the last one came in 2011.

Even though Smith’s submission of Oezdemir may not have been technically complex, the way it came about shows his grappling prowess. When Oezdemir wound up on the ground via double-leg takedown/straight-up fatigue, Smith immediately seized on a small window to gain Oezdemir’s back.

From there, the result was academic. Smith put Oezdemir in a body triangle that the Swiss fighter never escaped from. So while the submission itself was BJJ 101, the path to get there was upper level stuff.

A week from fight night, Smith remains a heavy underdog against Gustafsson according to sportsbettingdime.com. The Swede is a -270 favorite, while the American invader is at +210.

The issue, as the oddsmakers likely see it, is that getting this fight to the mat will be a massive undertaking for Smith, even if he even attempts to do so. The 6’5 Swede has an 84% takedown defense over his career. He was able to stuff four of five takedown attempts by Daniel Cormier, a former Olympic wrestler, when they met in 2015. He did the same against Jones at UFC 232.

Cormier and Jones are both near 50% in terms of takedown success for their careers. Smith is at just 28% and has only mustered four takedowns in his entire 11-fight UFC career.

Smith is not a bad striker, but he’s certainly more of a chucker than a tactician. If Gustafsson returns to the form he showed circa 2016, he will be able to keep Smith at range with his effective jab and land combinations when he moves forward.

That said, Gustafsson has only fought once in the last two years, and he did not look like his old self against Jones. When he faced Jones in 2013, “Bones” won a narrow decision and barely out-struck Gustafsson (134-110). When they met last December, Jones dominated from the opening bell, out-landing Gustafsson by a wide 59-22 margin.

Those eager to see Lionheart show off his ground game will be hoping that he drags this fight into the later rounds and that a fatigued Gustafsson doesn’t have the energy to defend Smith’s anemic takedown attempts.

Unfortunately, based on his history in the Octagon, Smith is likely going to stand and trade with the Swede in the early going, which will play right into Gustafsson’s hands.