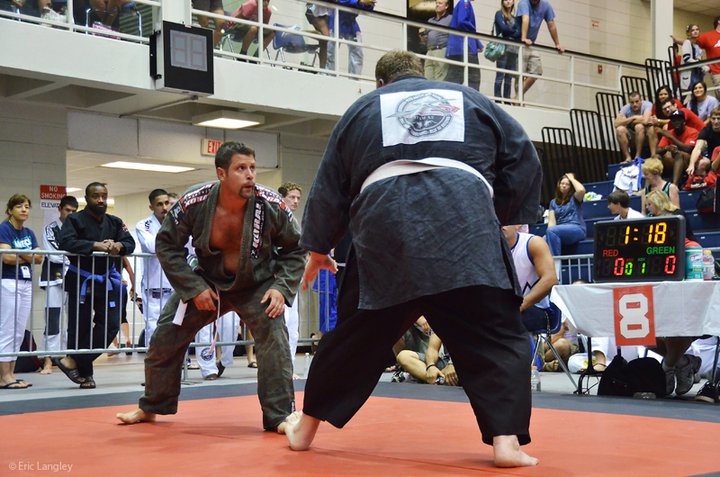 As I continue on with my BJJ journey, the term “Big Man Jiu Jitsu” has been a common phrase I have read about in some articles, blogs and heard about on some of the popular podcasts out there, most notably the “Inside BJJ Podcast”. I have always been a man of the bigger persuasion, even as a kid. As a big man, Jiu Jitsu has not come easy. There are some techniques that are difficult and some that are near downright impossible for a big man like me to do. My “belly” (without knee) often gets in the way of proper leg positioning and so many other things.

When I first started, I knew right away being a big man may be disadvantage. Most of the the guys I saw at the Academy were all slim, athletic guys and more often than not, I was always the biggest guy in the room.

OK, so now would be a good time to explain what I mean by the biggest guy… I  am talking about being the “fat dude” in class. There are several other students who are big, strong, muscular brick houses who have a body fat percentage under 10! Guys who have a never-ending gas tank and clearly this is not me! I am trying to be one of those guys and BJJ is slowly helping me get there, but in the mean time, I have some work to do in order to be able to survive rolling with the studs I described above! I am 5’9 and 250 as of the writing of this article. Short and sweet I like to say!

One thing I learned during my journey is to use my heavy weight to my advantage. One of my fellow students and good friends, “Mr. Kelly” told me once, “Mario… Gravity is your friend!”. It was a quick comment said in passing as he walked by me as I was struggling to keep my top position during a roll session, but it stuck with me ever since.

One other thing that has also stuck with me was a conversation I heard on the “Inside BJJ Podcast”  when they were advertising a “Big Man Jiu Jitsu Seminar” that I unfortunately had to miss. During the podcast, they talked about rolling with the big dudes and how they hate rolling with guys that just use their weight to smash somebody because they don’t have any other tools besides their weight.

I decided that I did not want to be “That guy” so I had to find a good balance where I could definitely use my weight advantage over smaller opponents, but at the same time I needed to force myself to develop my bottom game and pull guard from time to time so that my fellow students wouldn’t mind rolling with me if they drew the short straw!

With that said, I know that for my body type and conditioning at the moment, it is obvious that my game has to be all about top pressure. That is my bread and butter without a doubt. I need to learn how to maximize my efficiency in maintaining top position and at the same time do something with it other than just “laying and praying”. I have had a little trouble with this because I think I am just too nice! I often feel bad during techniques when I am on top, trying to be nice and stay “light”. My coaches often will say, “More pressure”, “Stay heavy”, “he won’t break”, “He can take it”!

One time I remember in particular, I had my chance to do everything the coaches have been telling me to do. I sparred with a much smaller man,  an older guy who is known as “Mr. Vu”. I am horrible at guessing people’s weight, but I would say he is probably 150-160 lbs. When I first saw this guy, I thought even though he was a Blue Belt and I was only a White Belt, I was going to dominate him just simply because I was younger and much bigger. Oh how WRONG I was! He pretty much handed my ass to me in quick fashion. He was a Blue Belt for a  reason! I went home that night scratching my head, trying to figure out how such a small guy could toss me around so easily. Being a big man has its advantages for sure, but you really have to have your BJJ techniques down too, or else being a big man doesn’t matter. They say that BJJ is the great equalizer. IT’S TRUE!

A few days later, I finally got a dose of what my coaches have been telling me to do all along. I was paired with one of guys who has been at the Academy since its opening several years ago. A Brown Belt who is a very quiet, older man from South Africa. A very distinguished looking gentleman with his close-cropped salt and pepper hair, heavy, strong build, but somewhat unassuming.

Practicing techniques with a partner is one thing, sparring is something different altogether! This guy twisted me up like a pretzel in seconds and I had nowhere to go and neither did my breath! I lost count as to how many times I tapped simply because I just couldn’t breathe and I felt claustrophobic and I panicked! My first thought was “I don’t want to roll with this guy again!” but the more I rolled with him, the more I learned. He was a NOT a bad training partner, he is a great training partner. Even though he smashed me, he would whisper in my ear and give me tips on how to escape, encouraged me to keep fighting, keep moving, etc…  The next time I rolled with someone comparable to his size and strength, I had him in mind and tried to emulate his style which served me well. I stayed in the fight a lot longer than what I was used to and just felt like I had more control and I wasn’t just trying to survive anymore.

I have so much to learn, but I feel I am on the right track.  As I said earlier, BJJ has not come easy simply because I am a big man, but the beauty of Jiu Jitsu is that you can adapt it however you need to in order to be successful. As you know, it started with  Grand Master Helio Gracie when he adapted his BJJ to fit his small stature and his limitations in order for him to be able to overcome bigger opponents. It’s works for us big guys too. We have to learn how to adapt certain techniques to overcome our obstacles our own bodies can sometimes give us. It’s an ongoing process that will come with frustration and disappointments, but it also comes with great reward, which completely overshadows the bad by leaps and bounds. It’s a great feeling to be able to pull off a complicated technique that you thought would be impossible simply by making small adjustments. My Professor and Coaches have been awesome at recognizing my limitations and helping make those adjustments to make BJJ work for me and I am very appreciative of that.

For my fellow big man amigos out there, don’t be afraid of stepping on the mat because you think you are limited or feel it’s an impossibility. It’s not. It IS possible. It’s NOT easy, but it is possible and you will be glad you did. Get off the couch and get on the mats! I am not telling you something that I don’t have to tell myself all the time so let’s do this together!

Oh, and for all of you NON-big men…  In the words of one of my co-workers and fellow Big Man, Watch out… HERE COMES THE THUNDER!