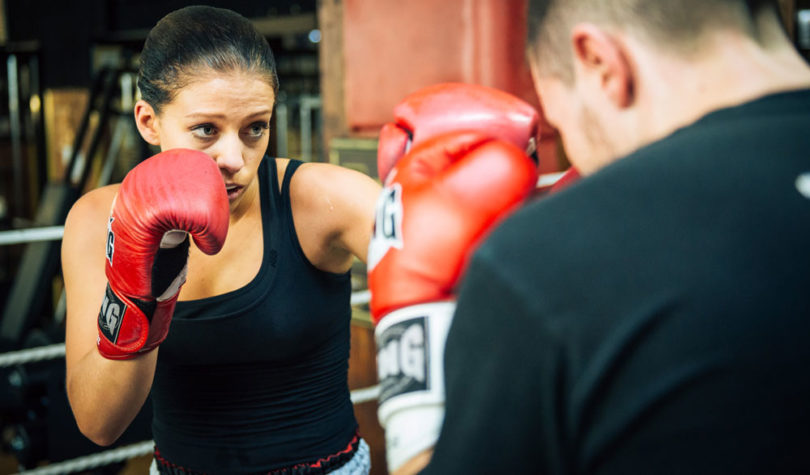 Muay Thai is one of the core disciplines of MMA. Arguably, the main disciplines in MMA would be Boxing, Wrestling, Brazilian jiu-jitsu and then of course, Muay Thai. Now, that’s not to limit MMA and say that you can only train in those if you wish to be successful. It’s not true. There are fighters who started out with karate such as Georges St. Pierre and Lyoto Machida and other fighters like Ronda Rousey who have gone onto become UFC champions in their respective weight classes. There have even been people who are successful in the cage who come from a Kung-Fu background.

But to be successful in the current MMA climate, you’re going to have some pretty nasty Muay Thai skills. Muay Thai, or Thai boxing, is a striking martial art that puts an emphasis on kicks, knees, elbows and clinching rather than just punching, like in boxing. It is often referred to as the art of eight limbs and is known for being both violent and brutal.

Using a normal boxing glove whilst training Muay Thai isn’t going to work. Normal boxing gloves are too rigid and are designed solely with the purpose of punching. With Muay Thai, there is heavy use of clinching; grabbing your opponent by the neck/back of the hand and then unleashing vicious knee after knee to their body and/or head.

You need a specific Muay Thai glove that isn’t as rigid so you can effectively clinch with your adversary. These gloves are also often shorter and more compact than traditional western boxing gloves too.

Fairtex are arguably the kings of Muay Thai gloves and the related gear. They’ve been producing excellent gloves for years as well as producing Muay Thai world champions in their gyms in Thailand.

These gloves allow you to throw heavy strikes as well as effectively control your opponent in the clinch, which makes them a brilliant addition to your gear bag if you wish to use them for full MMA sparring also.

They are available in sizes of 8oz, 10oz, 12oz, 14oz and 16oz. The smaller, lighter gloves are obviously better for the smaller trainee but also for competition use. It’s best to err on the side of caution though and buy the heaviest gloves you can if you wish to use them in sparring. Your sparring partner will thank you for it.

If you’re style-conscious, Fairtex offer 22 different colour options to choose from so you can likely have the exact colour or style that you’re looking for.

The first thing that stands out about the Sanabul BattleForged gloves is how stunning they look. If you prefer a more minimalist aesthetic then these gloves are the ones for you. Many companies chuck all kinds of stylistic nonsense on their gloves these days like fake blood splatters and flames and such. But Sanabul understand that you don’t have to be over-the-top or garish just because you’re selling combat gear.

These gloves are the same size and style as a traditional Muay Thai glove but with added padding and protection so you don’t have to pull your punches if you don’t want to. Sanabul use their SBL engineered leather and hand-shaped three layer foam to keep your hands as safe and secure as they can be.

They feature a full wrist strap that provides superior wrist support and allows for a more comfortable and adjustable fit.

One of the issues with Muay Thai gloves is that traditional Muay Thai does not feature an emphasis on punches, and the gloves reflect that; less support for the wrist and knuckles for example. Everlast combat this with the secure wrist strap so you still get that same Muay Thai glove flexibility in the clinch but with enough support for when you want to let them hands go.

The premium synthetic leather also provides long-lasting durability and functionality. You’ll be able to use these day in and day out without the leather cracking or the seams coming loose.

RDX use their resilient Maya hide leather in the gloves construction which provides it with a stubborn durability and long-lasting life.

Extra-thick supremo-shock foam is used throughout the glove, with emphasis on the knuckles, wrist and other especially vulnerable parts of the hand. The quick-EZ velcro system allows the gloves to be taken on and off easily without external help and keeps the glove firm and secure whilst you’re using them.

RDX also make use of their exclusive Quadro-Dome technology to disperse force equally throughout the glove so no part of your hand takes undue stress.

Like all RDX products, they are both sleek and stylish. With this glove, there are five colour options you can pair against the white gloves; blue, golden, pink, green and red. The stunning design stays durable and will not easily crack or peel off with use.
No products found.

Once again, Fairtex graces this top five list. They produce so many top of the range products that it’s almost impossible to make a list of great Muay Thai gloves and only include them once.

These stunning gloves are gold in both quality and colour, with a black falcon motif printed on the top side of them and a matching black hieroglyphic icon on each wrist strap.

As with all Fairtex gloves, you can expect the utmost in quality and construction with these gloves and a product that will stand strong in the face of hard and heavy use. Despite the stylish appeal, these gloves have been made with tough training in mind and will withstand anything you chuck at them.

Using a standard boxing gloves in a traditional Muay Thai session is not going to be fruitful. Many people think that Muay Thai is only about kicks and knees, but they don’t realise that the clinch is one of the most deadly techniques in it’s arsenal.

You’ll never be able to clinch as effectively as you can with a pair of western style boxing gloves, so do yourself a favour and get a top quality pair of Muay Thai gloves.