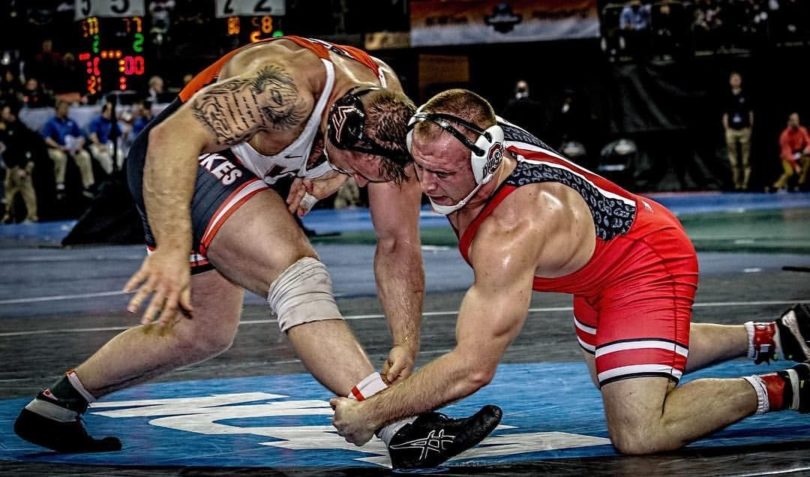 If done right, ankle picks can be a very effective and low-risk takedown, done incorrectly, the ankle pick and land you in a world of trouble, so we’re here to help.

The beauty of the ankle pick if that you’re rarely in a bad position of being guillotined, this is due to the head being more parallel to the opponent’s body, unlike a double leg when you’re driving through with your upper body. However getting the ankle pick right, especially the level changes can be quite difficult to grasp. Below we’ve put together a simple how-to guide to get you hitting this effective takedown.

Mechanics of the Ankle Pick

This is the basic sequence of the ankle pick but there are many variations, which include:

How to Setup the Ankle Pick

Let’s talk about the most common way of hitting the ankle pick, the target and drive. This works by attacking two points of a competitor and unbalancing them. By pulling the attacked leg and pushing the head it causes an unbalance from the three-point system a body needs to keep stable, causing a person to drop to the floor. This is a great starting point for beginners, however, at the higher levels, this becomes quite easy to spot and defend.

At the higher levels of wresting the competitors will look to fake and target the long leg. This setup works because as the wrong leg gets an attack, it automatically gets planted, opening up attacks on the free leg. If timed right a wrestler can hit this takedown before the free leg hits the floor.

Open mat shots are far more tricky to hit but if done right they can be done with devastating effect. The premise is, to hit a collar tie and the ankle pick at the same time, causing your opponent to move backwards. This is done by attacking the far leg so as the lead leg moves backwards the base the rear leg becomes free, allowing the takedown to be completed. This takedown is all about the timing and can only be attempted once as it can become quite predictable.

Completing the takedown can really depend on how your opponent reacts, traditionally you’re looking for a clean takedown or looking to finish a single or double leg.

A clean finish is obviously ideal as the takedown is simple enough to get you both to the floor, however, things are rarely that simple, especially at higher levels.

The most common way an ankle pick is through the single leg. A lot of wrestlers will use the ankle pick to set up a single leg, which is a strong takedown in itself. The ankle pick allows the competitor to drop and finish a low single or go up high for the high crotch single.

Finally, if the opponent drops his weight onto the leg the level change opens up the option of the blast double. Driving into the opponent to get them to the floor, this can be a devastating takedown if done correctly.

Ankle Picks from the Greats of Wrestling

Ths 4-time NCAA wrestling champion, Cael Sanderson is known as the “Ankle Picking Machine”. Sanderson is the only American wrestler to go undefeated during his collegiate career. The ankle pick was his devastating weapon and people knew it was coming but were never able to stop it. At the 2004 Olympic games, Cael would go on to win gold in Freestyle Wrestling, wherein the semi-finals he would go up against now UFC superstar Yoel Romero, who was competing for his home nation of Cuba.

Pipped as a rising star on the international wrestling circuit, David has already won multiple titles including the UWW World Cup and the prestigious Ivan Yarygin invitational tournament in Russia.

As Cael Sanderson’s pupil at Penn State University, Taylor used his knowledge of the ankle pick to devastating effect. Only ever losing 3 matches throughout his college wrestling career, he would go on to become a 2-time NCAA champion. However, while both are extremely proficient at the ankle pick, they both have different styles, where Taylor will drop to his right knee to initiate the takedown and Sanderson used to drop to his left knee. The setups were different but unsurprisingly the results were the same.