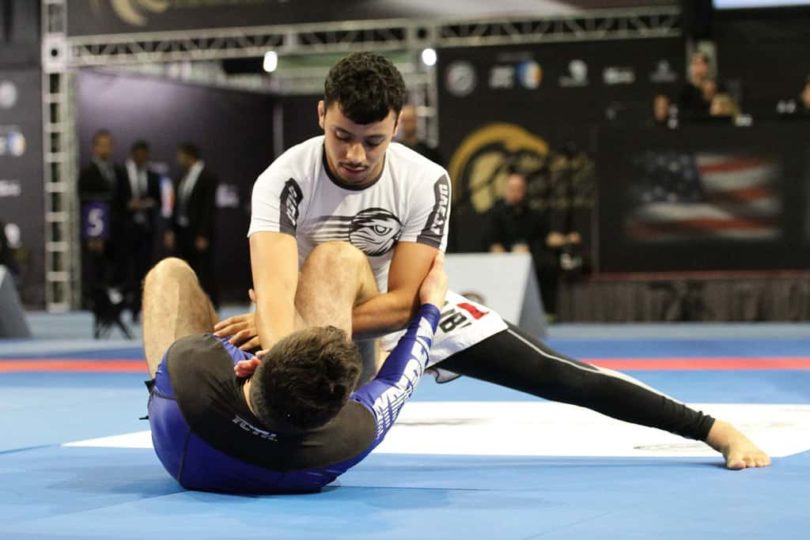 The Abu Dhabi Grand Slam in Los Angeles continued where it left off yesterday, as UAE National team rose to the occasion in the No Gi divisions and won a total of 7 medals in the presence of UAE General Counsel to Los Angeles, His Excellency Abdulla Alsaboosi and UAE Jiu-Jitsu Federation CEO, His Excellency Fahad Al Shamsi.

“Congratulations to all the competitors who participated on both days, it was two exciting days of sportsmanship and display of the highest level of quality and skills” Said H.E Fahad Al Shamsi, UAEJJF CEO

“Our National team players performed on an incredible level today, much better compared to yesterday, we won 7 medals. Congratulations to our players, coaches and the whole management who prepared for this event. We now shift our focus on to the next event in the championship world tour, which will be in Tokyo, Japan on the 23rd October. See you all there” Said H.E Fahad Al Shamsi, UAEJJF CEO

Day 2 of the Abu Dhabi Grand Slam Jiu-Jitsu World Tour Los Angeles, was a five-hour celebration of the gentle art. Champions of all divisions from white belt to black belt, from juvenile to master 2, were crowned after displaying the highest levels of technique and magnificent will to win.

In the highly anticipated main event of the day, Igor Silva beat Ricardo Evangelista at the No Gi 108 kg male No Gi black belt division finals and Mahamed Santos Silva picked up the Bronze medal.

“We all know Evangelista is one of the best fighters, and to win against him is an honor. He is a tough competitor, his skills are as good as it gets. I would like to thank Abu Dhabi and UAE JJ for organizing this event and giving us a professional platform at the highest level. I will be there in Tokyo next month and I am also excited to be in Abu Dhabi in January for the Grand Slam. Thank you to all my fans, my coaches and I will see you all in Tokyo” said Igor Silva

The UAE National Team performed on another level today with 7 well deserved medals after some beautiful performances on the mats.

“Firstly I would like to thank my team mates who did not win today, so my medal is dedicated to my teammates. I am very happy, I had some tough fights, these players are very skilled, always on the point. But to come to a competition like the Grand Slam, which has the best jiu-jitsu players from around the world and to win, is a nice feeling. It shows we are up there with the top players” said Khaled Eskander Al Blooshi

“We performed better at the No Gi divisions today, perhaps yesterday [Gi divisions] was us getting used to the competition. I would like to thank our team, coaches and the federation for their continued support. It was amazing to come here in Los Angeles, we saw the city, it is beautiful and then to win the gold, it just made it much more special. We will be back at the next Grand Slam in Tokyo and we hope to do even better over there. Said Mohamed Abdullah Khalifa