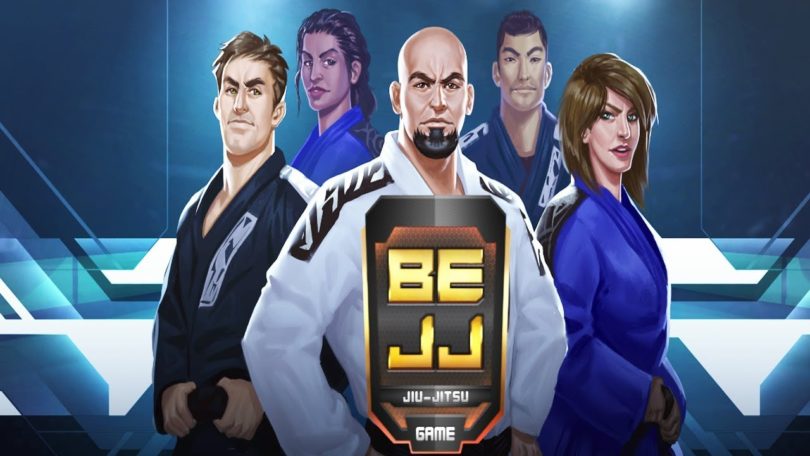 Stuck at home without BJJ? Why not do a BJJ home practice? Oh, you’re already done with all of them. OK then, maybe you could play a video game. UFC games, along with a few others, come to mind first. However, what if there was a specialised BJJ video game to play? The one that could get you as close to the mats as digitally possible? Well, there is apparently one on the horizon, in the form of BeJJ – The Jiu-Jitsu Game.

If there’s one thing in BJJ that we haven’t seen yet, it’s a BJJ video game. To be perfectly honest, it would be extremely difficult to implement, at least successfully. Of course, it can never even come close to rolling, but it can be fun enough to help us get through the COVID-19 isolation. Well, if this comes out before the end of the isolation, it is. So far, the expected release date for BeJJ – The Game of Jiu-Jitsu is a little later in 2020, maybe in the second half. Hopefully, we’ll use it for fun when it comes out, rather than the only link we have with BJJ Rolling.

Let’s make it clear from the beginning. There are martial arts games, then there are fighting games. If you call Mortal Kombat, Tekken and other martial arts games, you should definitely re-evaluate where you train. That said, they are a lot of fun to play, especially if you can play against another human rather than AI. But I get lost.

So far, I guess there aren’t many games that you can really call martial arts games. Several editions of the UFC game come to mind. In fact, apart from them, you couldn’t really say that there are real martial arts video games. UFC Undisputed is a great example of how an MMA game can really come close to what happens in the octagon in reality, given all the unknowns and ways to win. EA Sports UFC 2 then took it all to a whole new level.

The only problem with these games, whether fictional or reality-based, is that they’re not really Jiu-Jitsu specific, yes, there could be a crazy move or two in Mortal Kombat, and even more so in the UFC games. However, a pure BJJ video game was not available. Until now.

Does BJJ Translate to a Video Game?

So, what is this brand new BeJJ Jiu-Jitsu game thing? Will it be worth checking out or just another failed attempt at a realistic martial arts video game? What we know so far is that the game is brought to us courtesy of Smash Mountain Studio. A good sign right from the start is that the owner of the studio trains BJJ himself.

First of all, the platform. So far, the BeJJ game is intended to run only on mobile phones, and there is no PC or PS version even in the planning. The reasoning behind this is to make it available to more people around the world, because there is an option to play the game online against others, which I think is really cool.

The way the game is supposed to work is closer to a card game (or chess) rather than the usual decrease in “life force” resulting from punches and kicks. How it will work remains to be seen, although there is a trailer of the game you can watch HERE.

In terms of animation and options, the development team promised that the use of backhands, for example, along with other things specific to the BJJ, would be an option in the game. It remains to be seen, however, how this might relate to the mechanics of the card game that actually determine who is the better of the two fighters.

This first BJJ video game is currently in beta, which means it is available for testing. However, there are still many challenges to overcome until a full version is ready.

Finally, the development team’s idea of creating an electronic sport from the game and creating a virtual Jiu-Jitsu league certainly deserves recognition. In the future, the game should have teams, online championships and even special cards for specific skills. It remains to be seen how all this will work.

I’ll be honest – I’m at best sceptical about the success of the ayn BJJ video game. The initiative behind BeJJ certainly deserves recognition. However, the realization, especially since it’s a mobile phone version, only worries me. Even though it was one of the best game development teams working on a high definition PC / PS / Xbox version, I still had reservations.

To some extent, they are identical to the challenges the developers faced with the BeJJ video game. It’s all about figuring out who’s in the lead and who’s lagging behind, like without the punches and kicks that can be difficult lately. Also, how will all the complex moves work, such as linking together attacks based on different handles, and most importantly, jamming?

Although there are definitely questions, the fact remains that I am not at all against such a game. I just want the best possible experience that this game could end up offering. In any case, if it goes down because we’re still isolated, I’m among the first to get it, because there’s really a huge void for everything that’s going on right now, even if it’s virtual.

A BJJ video game sounds cool, but let’s see how it works. As long as it portrays BJJ in a cool way, I’d even sacrifice some of the graphics, which are undoubtedly extremely complex and challenging. Yet we’re a few months away from seeing how it all works, so for now, fingers crossed.