From Leon Roberts to Mike Beltran, get ready to dive into the refereeing history and expertise of the world’s greatest MMA referees.

These people have dedicated their lives to making sure that the sport of MMA is conducted in the safest and most controlled way possible. So, get to know some of the best referees in the world and how they got to where they are today!

The Best Referees in MMA Refereeing is a difficult job, and Roberts is one of the best in the business. He is known for his attention to detail, his strong understanding of the rules of MMA, and his ability to communicate with both fighters and referees. Roberts is also a highly respected member of the MMA community.

Roberts is one of the few referees who has officiated both UFC and WEC bouts. He has also officiated in several international events, including the Abu Dhabi Combat Club’s “Abu Dhabi Grand Prix” and the “K-1 World Grand Prix 2006”.

Roberts has been a part of the MMA refereeing community for over 10 years and is highly respected by both fighters and officials. He is a valuable member of the officiating team and is always willing to lend a hand. 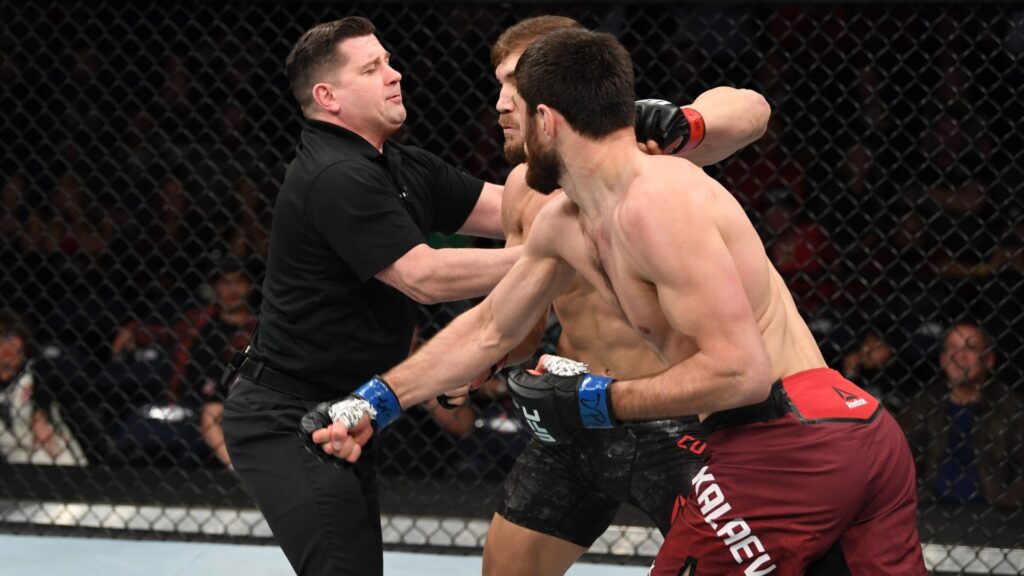 Kevin MacDonald is an esteemed MMA referee well-recognized throughout the sport. He started his career in 1998, mostly in regional shows throughout Canada and the US. He is a veteran of over 700 professional MMA fights and is highly praised by UFC officials and commentators.

As one of the most experienced and respected referees in professional MMA, his ability to maintain control and order in the cage is unparalleled and he is highly dedicated to the sport. Throughout his career, he has officiated numerous title fights and some of the sport’s greatest matchups.

His commitment to the sport and his admirable knowledge of the rules have earned him a great deal of respect in the MMA community. Whether it’s pre-fight preparations or post-match dealings, Kevin MacDonald has proven to be an extremely reliable and responsible referee. His involvement over the years has only added to his stature as a promoter and ambassador of the sport. 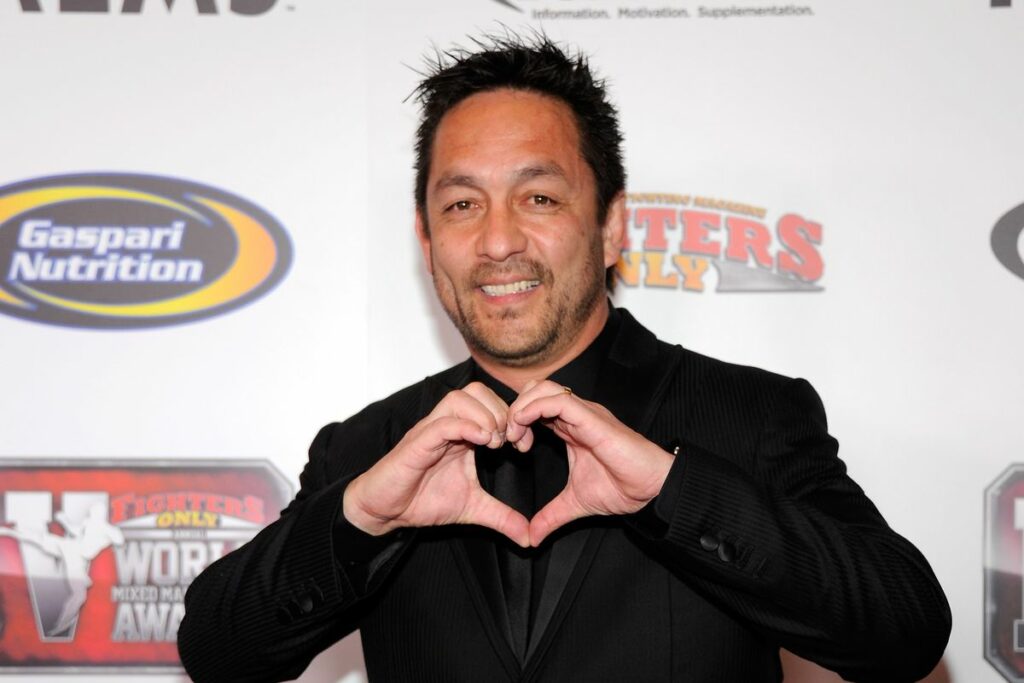 Mario Yamasaki is a veteran MMA referee with over two decades of experience. Known for his finger heart sign, he is mostly respected for his knowledge of the sport and for his impartial decisions in the cage. He is widely considered to be one of the best officials in the sport, however, he has been the reason for some very questionable decision-making in his career

Unfortunately, Mario Yamasaki has earned himself a negative reputation as one of the most controversial referees in the sport of MMA. He has officiated countless fights and made countless decisions that have left fighters and fans alike dumbfounded.

Though Yamasaki is a trusted veteran, many view his decisions as being too lenient when it comes to fouls and dangerous circumstances in the cage. He has failed to stop a fight on multiple occasions despite fighters being put in precarious positions, resulting in cries for reform for the rules governing referees in MMA. Steve Magazzagatti is one of the most respected MMA referees in the sport, but his career has been marred by some controversial decisions.

He has been criticized for not stopping fights when he should have, as well as for a number of questionable calls in fights. This has caused a number of debates among fighters, fans, and commentators in the MMA community.

In addition to a number of controversial referee calls, Steve Magazzagatti has also been criticized for a perceived lack of impartiality in some of his fights. He has been accused of favoring one fighter over another, and this has generated a lot of animosity among those who believe that he has ‘lost’ them a fight.

While his skills as a referee have been contested in some instances, his experience and knowledge of MMA are indisputable, and he continues to officiate some of the biggest fights in MMA. 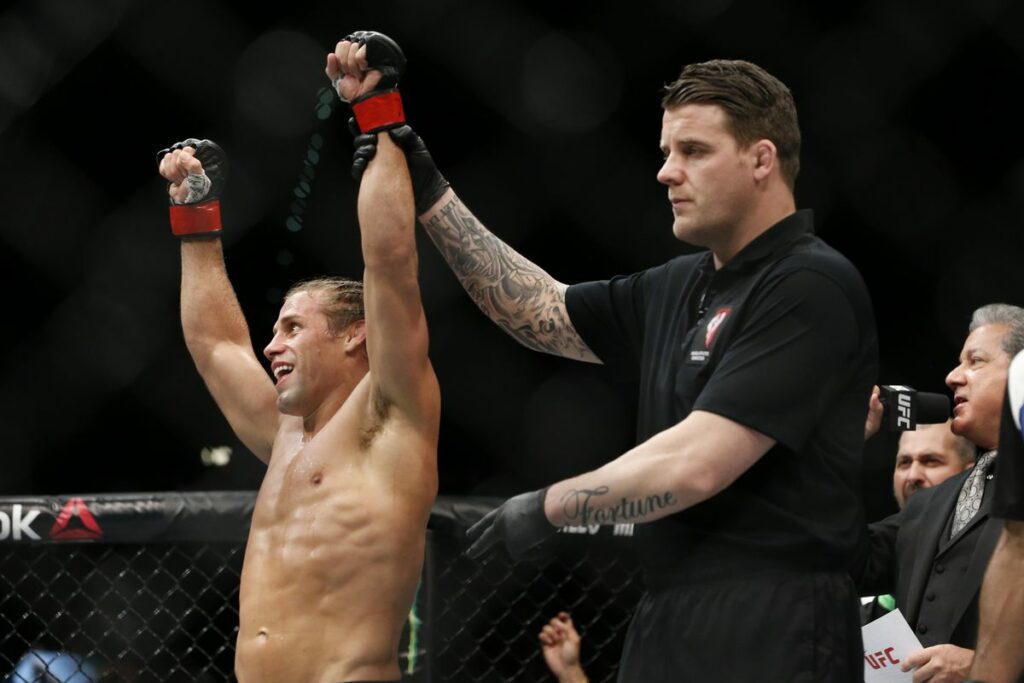 Our only UK MMA referee on the list, Marc Goddard is a highly respected referee in the sport of MMA.

He has officiated some of the greatest fights in MMA history and has been involved in the sport since the late ’90s giving him the reputation as one of the sport’s most respected figures.

His impressive career and credentials are known throughout the MMA community and he is considered one of the most experienced and knowledgeable referees in the world.

Marc Goddard has an extensive background in the sport. He began his MMA journey by training with the likes of legendary fighters and trainers, including John Kavanagh, Ken Shamrock, and Bas Rutten. He eventually turned to refereeing after an injury ended his aspirations to become a professional fighter. He went on to officiate regional shows before making the jump to mainstream promotions.

Since his transition to MMA referee, Marc Goddard has earned international accolades and recognition. He has officiated some of the biggest events in the sport, including UFC, Bellator, and Cage Warriors. He has become an iconic figure in the sport, known for his professionalism and authoritative presence inside the cage.

In summary, Marc Goddard is one of the most experienced and respected referees in MMA with an inspiring career background. 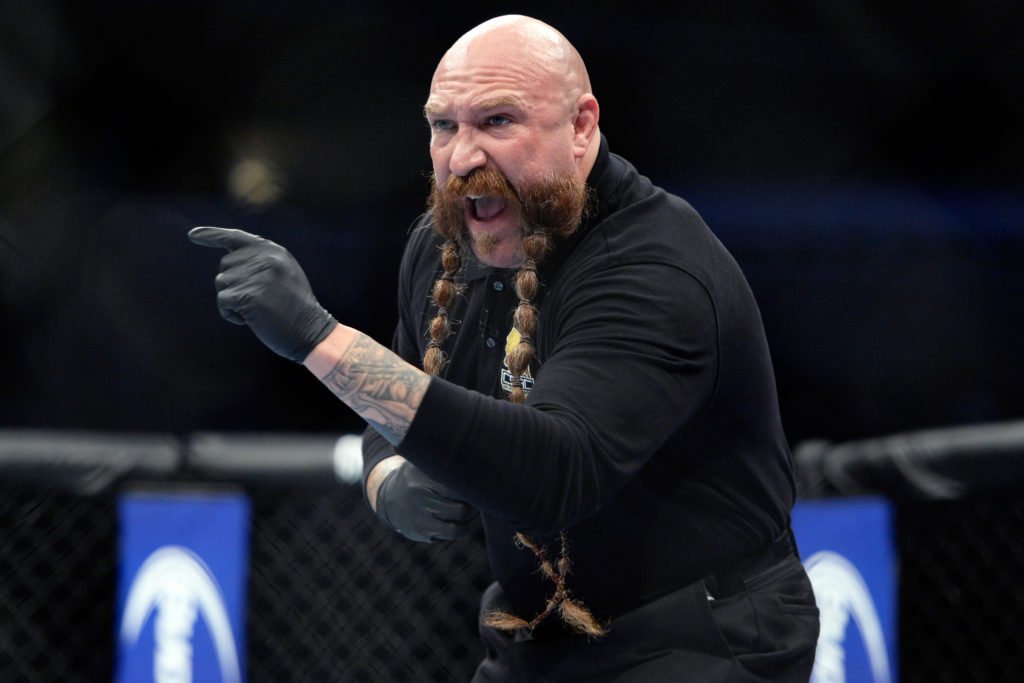 Known for his iconic mustache, Mike Beltran is an experienced MMA referee who has officiated hundreds of fights in some of the top global MMA promotions.

He has an extensive background in the sport and has worked with fighters, coaches, and promoters throughout his career. Beltran has been involved in the sport since 1997 and is a highly respected figure in the MMA community.

Mike Beltran began his journey in the sport as a cage fighter in Hawaii back in 1997. He eventually transitioned to become an MMA referee and worked extensively with the UFC until 2015.

Mike Beltran has since gone on to referee in various organizations and promotions. He has worked in some of the biggest MMA events across the globe, from Japan’s Gladiator Fighting Championship to Bellator in the USA. 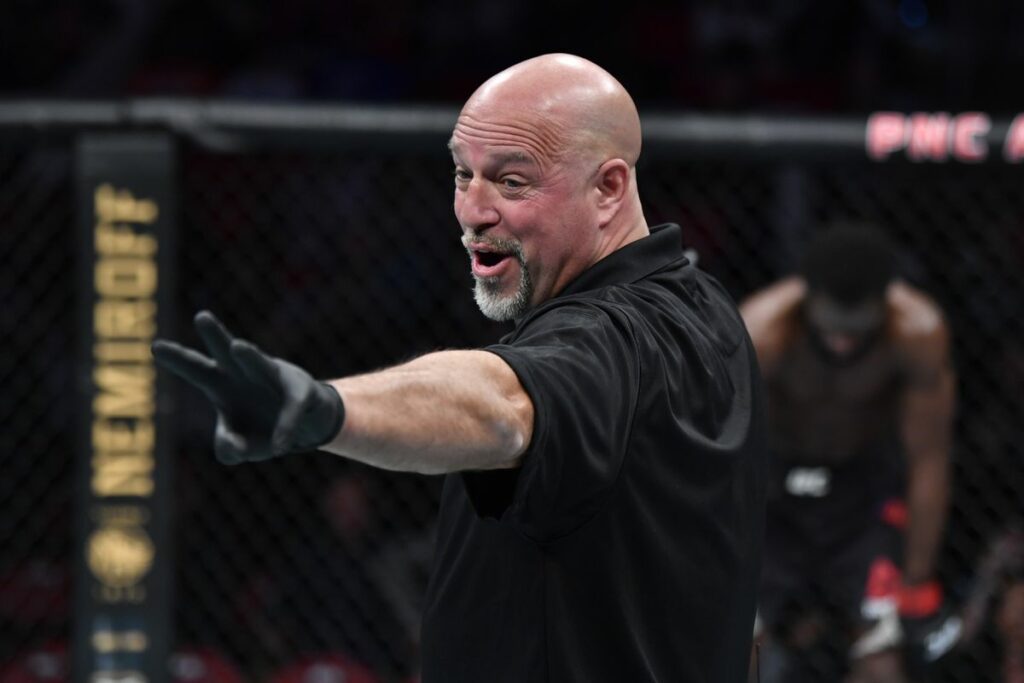 Beginning his career in MMA as a referee in some of the small promotions in the US. He quickly earned a reputation for his knowledge of the rules and his impartiality in the cage. He eventually made the jump to the mainstream promotions, officiating fights in the UFC, Strikeforce, and Bellator.

Known for his authoritative presence inside the cage and his ability to control the fight with fairness and impartiality. He has earned the respect of fighters, coaches, and commentators alike, thanks to his extensive knowledge of the sport and his deep understanding of the rules and regulations.

In short, Dan Miragliotta is a well-respected and highly experienced referee in the sport of MMA. 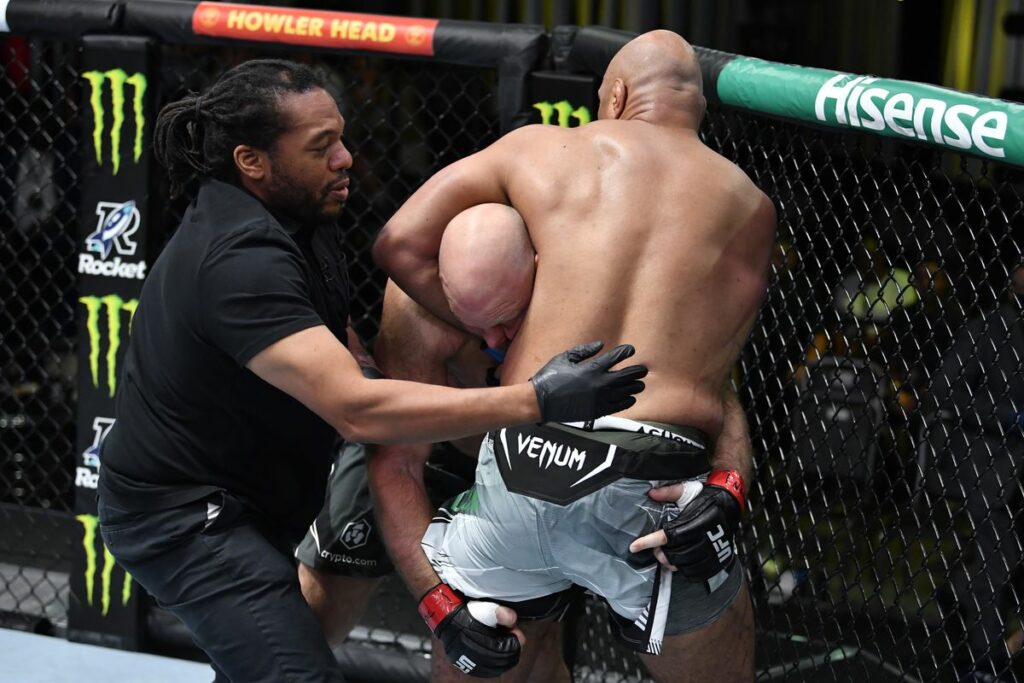 Herb Dean is an experienced MMA referee and official who has been involved in the sport of MMA for more than two decades.

He has officiated hundreds of professional fights and is widely regarded as one of the best referees in the sport.

Herb Dean began his career as an amateur MMA fighter with a record of 2-3 before transitioning to refereeing in the mid-1990s. He has since become an iconic figure in the sport, thanks to his ability to stay impartial when officiating inside the cage. He is an experienced judge of character and his respect among fighters and coaches is unquestioned.

Herb Dean is currently one of the most sought-after referees in MMA. He has officiated some of the biggest matchups in the sport, from UFC to Bellator. He has earned a great deal of respect from athletes and fans alike, thanks to his clear and precise calls inside the cage. 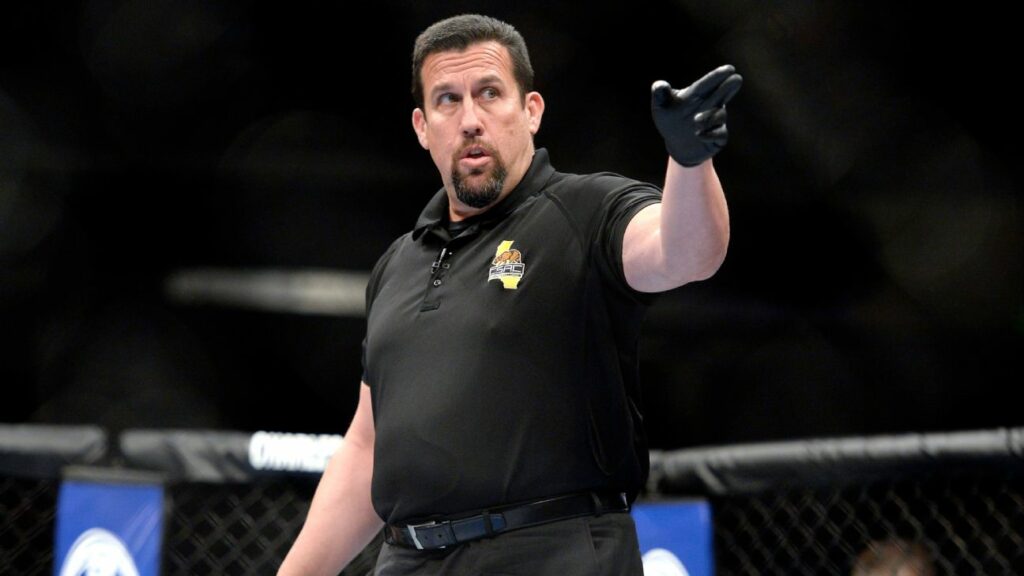 John McCarthy, affectionately known as “Big” John McCarthy, is a renowned MMA referee who has been involved in the sport since the very early days. He has had a storied career in the sport, having officiated some of the most important matchups in MMA history and has even been featured in an episode of Friends.

John McCarthy started out as a police officer in the LAPD before entering the world of MMA in the mid-’90s. His understanding of the rules of combat and his officiating style made him a perfect fit for the role of referee. He worked extensively with the UFC and has since become an iconic figure in MMA.

John McCarthy stands as a beacon of respect in the sport of MMA. He is an unrivaled expert in the rules, regulations, and history of MMA and is well-respected by fighters, coaches, and promoters alike. He has earned great respect from many in the sport and his influence since the early days is still strongly felt.

These days you can find “Big” John McCarthy commentating for the American MMA organization Bellator, where his knowledge and expertise are unparalleled.

Daisy Fresh BJJ – All About The Pedigo Submission Fighting Team